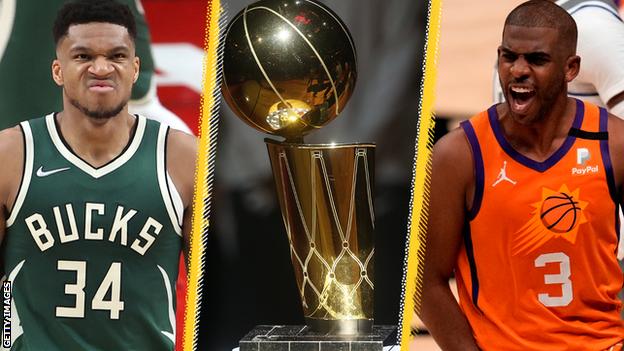 After a long but entertaining season, the NBA Finals are finally here.

The Phoenix Suns will take on the Milwaukee Bucks in the best-of-seven series, beginning on Tuesday evening in the United States (02:00 BST in the UK).

At the start of the regular season many people would have expected a LeBron James v Kevin Durant showdown between the Los Angeles Lakers and the Brooklyn Nets but after injuries to a host of big names, the stage has been set for new, up-and-coming talent to make waves. 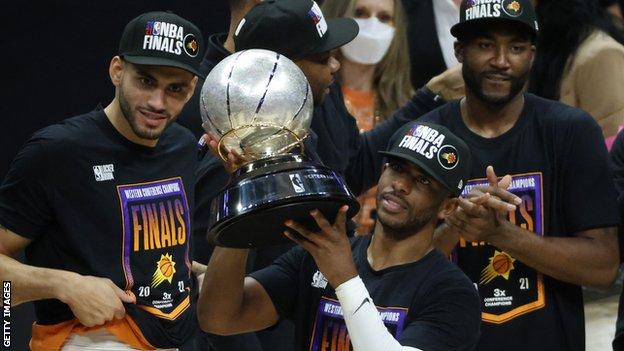 The Suns may not have been a favoured team to make it to the Finals when the season started in December, but the signs of progress had been there.

They had an impressive end to the 2019-20 season, as a Devin Booker-inspired team won eight straight games in the NBA bubble, just missing out on the play-in tournament.

The off-season proved pivotal. The Suns traded for All-Star point guard Chris Paul, who had lead the Oklahoma City Thunder to the play-offs a season earlier.

It was their biggest trade since acquiring Charles Barkley before the 1992-93 season, the last time the Suns reached the NBA Finals.

With franchise star Booker now alongside an elite point guard in Paul, it set the tone for an all-action team ready to make a run at the play-offs.

Before now, Paul's 16 years in the league hadn't resulted in a visit to the Finals. He came close with the Houston Rockets in 2019, going 3-2 up in the Western Conference finals against eventual champions the Golden State Warriors.

Paul was forced to miss out on their final two games through injury and looked set for one of the most illustrious NBA careers without a chip to match – until, possibly, now.

He picked up the biggest scoring half of his career in the Suns' closeout semi-final game against the LA Clippers – 31 of his 41 points coming in the second half. 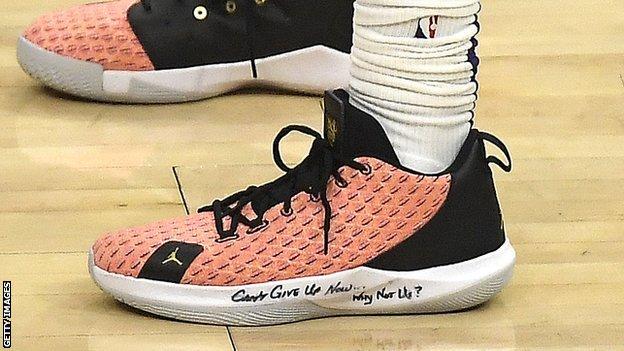 The message on Chris Paul's shoe was not hollow words

A tearful Paul spoke after the game, with the words 'I can't give up now' written on his shoes.

"First series we got the nerve thing. Win the second series, end up with Covid. It's been a lot and I want it not just for myself, but for everybody in that locker room," he said.

But it's not just Paul who took on the offensive load in Phoenix – the new 'guard' well and truly took over. 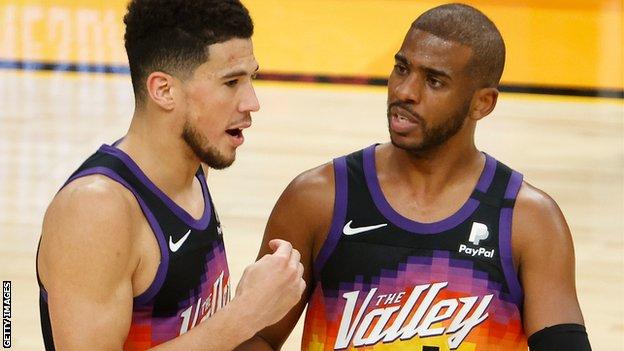 Booker has become a bona fide superstar in his first play-off series.

The 24-year-old had previously been tainted with the same brush that marked the Suns in years gone by – he was the best player in a team that hadn't had a winning record since the 2013-14 season.

He averaged 27 points per game in this year's play-offs, stepping up when Paul missed out through Covid-19 isolation protocol.

'Be legendary' were the words of wisdom he received from the late Kobe Bryant, and he appears on the road to becoming that.

They've never won a chip in franchise history and this might just be their best chance yet.

The Bucks have finally got over the line.

They've been so close before, finishing as the Eastern Conference number one seed in the past two seasons.

But, it's the play-offs where they've come unstuck.

The 2018-19 season saw them lose out to eventual champions Toronto Raptors in the Western Conference finals, with the Miami Heat winning the conference semi-final last season.

Led by two-time MVP Giannis Antetokounmpo and his surrounding cast of All-Star Khris Middleton, Jrue Holiday and PJ Tucker, the Bucks got the job done.

Their play-off run started with a 4-0 sweep of last year's finalists the Miami Heat, which led to a semi-final meeting with the star-studded Brooklyn Nets.

Before their semi-final it looked a clear path to the final for Brooklyn, with All-Star trio Kevin Durant, Kyrie Irving and James Harden surely going to lead them to victory.

But, injuries to Irving and Harden gave the Bucks the upper hand and saw them take a 4-3 series victory.

They came up against the Atalanta Hawks in the Eastern Conference finals, with talisman Trae Young leading the opposition attack.

Again injuries were pivotal to this series, but this time the Bucks suffered as well.

A knee injury to Antetokounmpo in game four with the series tied at 2-2 could have led to another play-off heartbreak for Milwaukee.

But Mike Budenholzer's roster pulled together for back-to-back wins to clinch their place in the NBA Finals.

There's no time frame on Antetokounmpo's absence from the team, but for the moment the Bucks will most likely look to Middleton to lead them. 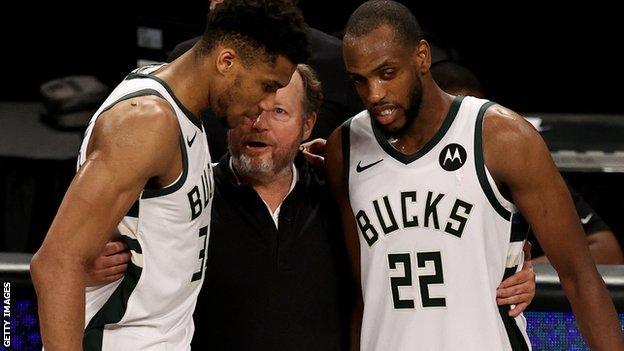 Middleton has often had his ability to perform as the second star of the team questioned but during this season's play-offs he has pulled Milwaukee through when it mattered most.

The forward had clutch games in all three rounds of the play-offs. He scored 27 to open Milwaukee's sweep of Miami, and followed up that performance with a huge 38-point outing in game six against the Nets when facing elimination.

Game six of the Eastern Conference finals saw him drop 32 points, including 23 in the third quarter.

It's a chance at history for both organisations and with the league's future stars at the forefront of the show, we seem poised for a blockbuster of a Finals series.