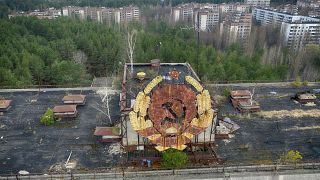 In the 35 years since the nuclear disaster at Chernobyl, the nearby main thoroughfare in Pripyat, Ukraine, has been taken over by plants, trees and wildlife.

Abandoned hours after the meltdown of the Soviet nuclear reactor in 1986, the town that once housed workers of the nuclear plant and their families has existed ever since as an eerie ghost town.

But now its central boulevard has been cleared of trees and shrubs, and even reconnected to the electricity grid. In 2020, the former residents of this once-thriving town visited it for the first time to mark five decades since it was first established in the then-Soviet Union.

While only a trickle of hardy tourists have made their way to Chernobyl and its environs over the last decade, the Ukrainian authorities believe this could soon turn into a stream – if not a flood.

Public awareness of what happened at Chernobyl 35 years ago on April 26 has been heightened by a popular and critically-acclaimed HBO mini-series about the disaster and its aftermath.

Mass tourism would not only help to keep the events of Chernobyl alive, the Ukrainian authorities believe, but also bring in cash to help with further restoration work.

As well as the restoration in Pripyat, the government plans a new museum showcasing rescue equipment used during the clean-up more than three decades ago.

In the aftermath of the world’s worst ever nuclear disaster, some 350,000 people were relocated from the region surrounding Chernobyl. A new town, Slavutich, was established to house plant workers and scientists around 30km from the site of the explosion.

But the Chernobyl Exclusion Zone remains a vast, empty monument to the massive human errors committed by the Soviet authorities 35 years ago, which led to Reactor No. 4 exploding, catching fire and then spewing radioactive material into the atmosphere.

The Soviet authorities attempted to keep the disaster quiet. The wider world only learned something had happened at Chernobyl after radiation levels were detected as far north as Sweden. In Kyiv, residents were initially not told about the meltdown, which occurred just 65 kilometres to the south. 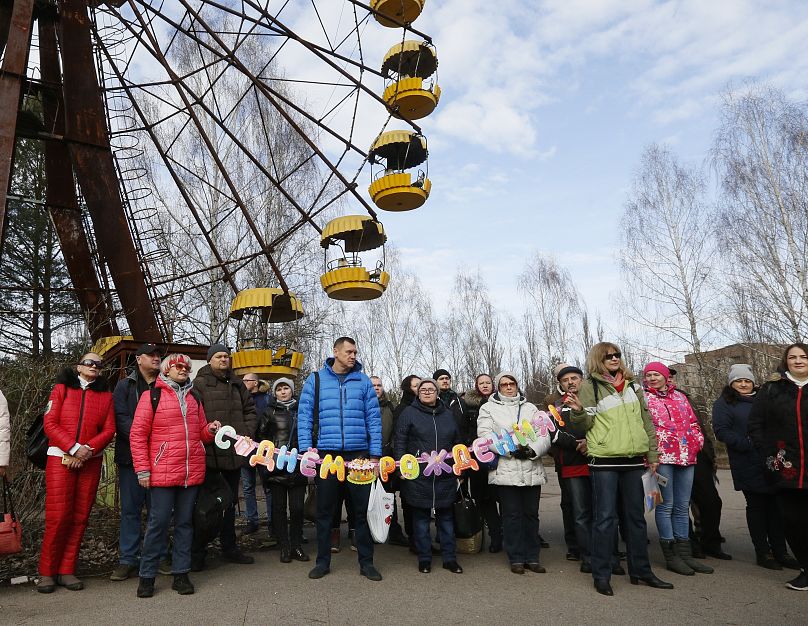 Former residents of Pripyat hold the sign ‘Happy Birthday’ as they celebrate the 50th anniversary of the city in a city park of Pripyat, not far from Chernobyl.Efrem Lukatsky/Copyright 2019 The Associated Press. All rights reserved

The reactor was initially housed inside a huge sarcophagus, which as recently as 2019 was still leaking radiation. That year, it was finally encased in an arch-shaped shelter. Inside, robots continued the painstaking process of dismantling what remained of the reactor.

Only now are officials Ukrainian officials comfortable in suggesting that, eventually, the exclusion zone, Prypat and even the entombed reactor could become a tourist destination: a monument not only to mankind’s past mistakes, but to its ability to pick itself up and carry on.

“Our tourism is unique; it is not a classic concept of tourism,” said Bohdan Borukhovskyi, Ukraine’s deputy environment minister.

“This is an area of ​​meditation and reflection, an area where you can see the impact of human error, but [where] you can also see the human heroism that corrects it.”

The airing of the HBO series saw tourist numbers double in 2019, authorities say, before the COVID-19 pandemic had brought it to a complete halt by the middle of 2020. When the pandemic recedes, officials hope that they can harness Chernobyl’s tourist potential.

Hence the work in Pripyat, where as well as vegetation-clearing and electrification, the authorities plan to construct set paths through the ruins so tourists can take in sights such as the city’s abandoned swimming pool and amusement park.

All four of the plant’s reactors are in the process of being dismantled, but this work in itself will not be completed until 2064 at the earliest. Parts of the site could be radioactive for centuries but levels are now low enough for tourists to safely visit and for scientists to carry out their work.

Ukraine still forbids long-term habitation inside the zone, although about 100 people – mainly elderly former residents – are thought to have defied the order and continue to live there.

The absence of humans has led to the flourishing of wildlife, with bears, bison, wolves, lynx, wild horses, and dozens of bird species living around the site. It has also attracted scientists, who welcome the opportunity to study how animals respond to the relative absence of human development.

“This is a gigantic territory… in which we keep a chronicle of nature,” said biologist Denis Vishnevskiy, 43, who has been observing nature in the reserve for the past 20 years. “The exclusion zone is not a curse, but our resource ”

Now Ukraine is looking to have the exclusion zone listed as a UNESCO World Heritage Site.

“People should leave the exclusion zone with the awareness of the historical memory of this place and its importance for all mankind.”