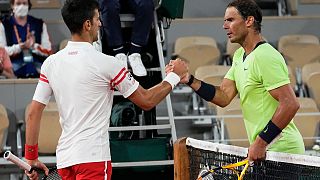 Sprinting, sliding and stretching, anticipating each other’s moves for four sets and more than four hours, Novak Djokovic and Rafael Nadal produced a masterpiece in the French Open semifinals.

Djokovic, as it happens, is one of only two men in tennis history who knows what it takes to beat Nadal at Roland Garros. And now Djokovic has done it twice — this time ending Nadal’s bid for a 14th championship there and record-breaking 21st Grand Slam title overall by coming back to win their 58th career matchup 3-6, 6-3, 7-6 (4), 6-2 on Friday night.

“Just one of these nights and matches that you will remember forever,” said the top-seeded Djokovic, who trailed 2-0 in the closing set before reeling off the last half-dozen games to reach his sixth final at the clay-court major tournament.

“Definitely the best match that I was part of ever in Roland Garros, for me, and (one of the) top-three matches that I ever played in my entire career,” Djokovic said, “and the atmosphere, which was completely electric.”

Djokovic to face Tsitsipas in the final

It was Nadal’s third loss in 108 matches at a tournament he won each of the last four years, including by beating Djokovic in the 2020 final.

Nadal’s first defeat at the French Open came against Robin Soderling in 2009; the next against Djokovic in 2015.

“Each time you step on the court with him,” Djokovic said, “you know that you have to kind of climb Mt. Everest to win against this guy here.”

The fifth-seeded Tsitsipas edged sixth-seeded Alexander Zverev 6-3, 6-3, 4-6, 4-6, 6-3 earlier Friday to reach his first Grand Slam final. It’s Djokovic’s 29th as he seeks a second title at the French Open and 19th major championship overall to pull within one of the men’s Slam mark shared by Nadal and Roger Federer.

Tsitsipas already had given away all of a two-set lead in his semifinal Friday when he recovered to take the fifth. His semifinal offered a measure of drama. But in truth, Tsitsipas-Zverev was merely an opening act before the headliners.

Nadal and Djokovic really riled up the raucous crowd at Court Philippe Chatrier.

No two men in the professional era, which dates to 1968, have played each other more than this duo (Djokovic now leads 30-28).

The third set alone lasted 1 hour, 33 minutes, and an 11 p.m. nationwide curfew in place because of COVID-19 was approaching. Djokovic’s previous match had been delayed more than 20 minutes while the audience — limited to 5,000 people under coronavirus restrictions — was cleared out of the stadium, but an announcement was made Friday to let everyone know the government agreed to let them stay until the end of the match.

Earlier chants in French of “We won’t leave!” were replaced by choruses of the national anthem and cheers of thanks for President Emmanuel Macron.