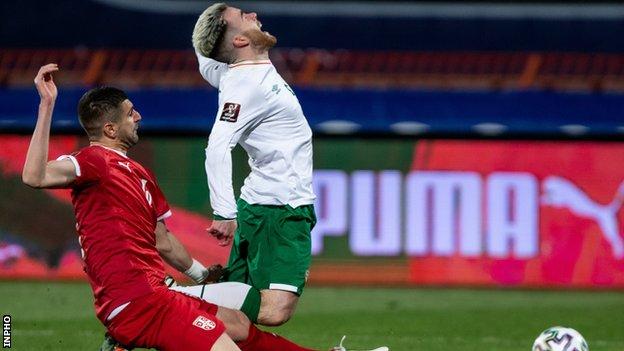 Republic of Ireland boss Stephen Kenny says Aaron Connolly has not yet been ruled out of Saturday's World Cup qualifier against Luxembourg in Dublin.

An earlier Football Association of Ireland tweet said the Brighton striker would miss Saturday's qualifier and Tuesday's friendly against Qatar.

However Kenny later said the 21-year-old was "up against it" to be fit.

Connolly recently returned to club action after a rib injury and lasted 67 minutes in Wednesday's loss in Serbia.

Kenny was speaking in his pre-match news conference for the must-win Aviva Stadium contest some two hours after the FAI tweeted that injury had forced Connolly to return to his club.

The FAI tweet was later deleted although the suspicion Connolly will not be involved on Saturday then increased when the striker posted an Instagram message from Brighton seafront.

The Brighton striker was at the centre of a second-half penalty controversy in Wednesday's game when a challenge by Serbia defender Stefan Mitrovic went unpunished and then appeared to be bothered by a calf injury prior to coming off. 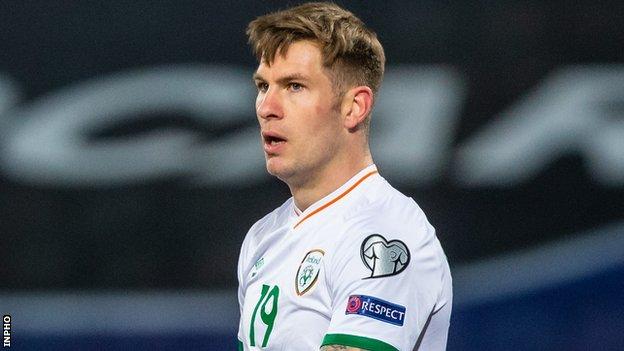 James Collins, who scored the Republic's late second goal in Belgrade, and Shane Long will be candidates to start on Saturday after their second-half introductions if Connolly is ruled out while Kenny said Tottenham youngster Troy Parrott, who is currently on loan at Ipswich, "also comes into the picture".

Parrott travelled to Serbia with the squad but was not named in the matchday 23.

The doubts over Connolly's fitness the latest in a series of injury issues for Republic boss Kenny who is yet to secure a victory in his opening nine games in charge.

Caoimhin Kelleher, Kevin Long, Conor Hourihane and Callum O'Dowda were all unable to travel to Belgrade after being named in the initial squad while other injured absentees include James McCarthy, John Egan and Adam Idah.

Liverpool keeper Kelleher's absence came after regular starter Darren Randolph was unable to take his place in the squad because of injury.

Kenny picked inexperienced side in Serbia

Bournemouth goalkeeper Mark Travers won his third cap in Belgrade and came in for some criticism after being lobbed by Aleksandar Mitrovic for Serbia's second goal after Alan Browne had put the Republic ahead in the first half.

Kenny was unwilling to confirm whether Travers, 21, would retain his starting role on Saturday.

"I haven't picked the team and it wouldn't be fair to do it in the media as the players are not aware of the team quite yet," added the Republic boss.

Burton Albion's Kieran O'Hara, who has two caps, and uncapped Manchester City player Gavin Bazunu, who has had the most first-team football of the three Irish custodians this season during his loan spell at Rochdale, are the other keepers in Kenny's squad.

Kenny's side had a bold and inexperienced look in Belgrade as he picked West Brom's Dara O'Shea in a five-man defence with Shane Duffy left out amid his club struggles at Celtic.

Despite being caught out for pace Dusan Vlahovic for Serbia's first goal, O'Shea looked composed for the most part and Newcastle's Ciaran Clark could be the defender under pressure to retain his starting role after appearing uncertain in the air in midweek.

Brighton midfielder Jayson Molumby, now on loan at Preston, and Anderlecht's Josh Cullen won their sixth and fifth caps respectively as Jeff Hendrick and Robbie Brady were left out and there would seem to be little logic to Kenny not keeping faith with the duo again on Saturday.