Aaron Rodgers has called his future "a beautiful mystery", but his situation with the Green Bay Packers is turning ugly.

Rodgers has spent his entire career with the Packers, winning Super Bowl 45, and was named the NFL's Most Valuable Player for the third time last season.

But despite going within one game of Super Bowl 55, the veteran quarterback is disgruntled with the team's management.

On the morning of this year's NFL draft, news broke that the 37-year-old wants to leave Green Bay.external-link

Five weeks on, the matter has not been resolved. The Packers held their three-day training camp this week and their talisman was a no-show.

So what does this mean for Green Bay and Rodgers? Could the future Hall of Famer really sacrifice more than $35m by spending 2021 on the sidelines?

Why is Rodgers unhappy?

Rodgers' relationship with team management has been strained since the 2020 draft. Rodgers, who is under contract until the end of the 2023 season, hoped Green Bay would pick a receiver in the first round.

Instead they took someone who plays in his position – Jordan Love. Rodgers was given no warning and admitted he was "not thrilled by the pick".

He responded by leading Green Bay to the NFC Championship game, where at the death they were eight yards from the Tampa Bay Buccaneers' endzone. They needed a touchdown and a two-point conversion to tie the game.

Instead of trusting Rodgers, they kicked a field goal then didn't manage to get the ball back for a chance to win it. After the game, Rodgers said simply "it wasn't my decision".

And there were other issues for Rodgers. He wanted more input in personnel decisions and, two days after praising receiver Jake Kumerow last September, saying "he's a guy you love having on the squad", the Packers cut him.

Speaking to ESPNexternal-link two weeks ago, Rodgers confirmed his discontent but said it was less about the Packers drafting his potential successor and more about their "philosophy and maybe forgetting that it is about the people that make the thing go. It's about character, it's about culture, it's about doing things the right way."

Why does missing training matter?

The NFL's off-season programme begins with organised team activities (OTAs). Attendance is voluntary but young players are expected to attend, and veterans are offered workout bonuses to be there.

During the off-season, Rodgers has been guest host of TV game show Jeopardy!external-link and was on holiday in Hawaii while his team-mates reported back for OTAs last month.

The only mandatory part of off-season is each team's three-day 'minicamp', and for the first time in his 16-year career, Rodgers has skipped OTAs and minicamp.

If he doesn't show for training camp from 27 July, he'll be fined $50,000 each day. If he sits out the season he'd forfeit his salary and Green Bay can reclaim bonus money already paid. It could ultimately cost Rodgers more than $35m.external-link

He is now officially a 'holdout'. Usually players hold out over their contract – for a pay rise or greater long-term security. For him, Rodgers says it's not about money, it's about principle.

But since he wasn't at minicamp, the Packers have had to start preparing for life without him.

Trading Rodgers right now is unlikely. With most teams set on their quarterback for 2021, the only realistic prospect is the Denver Broncos.

Although Rodgers' contract runs to 2023, the way it is structured means that, financially, the end of this season would be a convenient time to sever ties, when more teams would be looking to trade.

So the Packers could let last season's MVP be a 'holdout' this year and get more trade value for him in March, while Rodgers would have more offers to choose from.

For now, Jordan Love is Green Bay's number one quarterback. But on Saturday, in his monthly fans Q&A on the team website,external-link Packers president Mark Murphy suggested he isn't ready to start in the NFL.

"It was a shame for Jordan that the pandemic impacted so much of his rookie year," wrote Murphy. "Although it wasn't a completely wasted year, he had no in-person practices in the off-season programme and no pre-season game experience."

Not only did Love not play last season, he didn't suit up for a single game. Little wonder coach Matt LaFleur said "he needs every rep he can get" this week, when the 22-year-old's every throw was scrutinised by fans and media at minicamp. 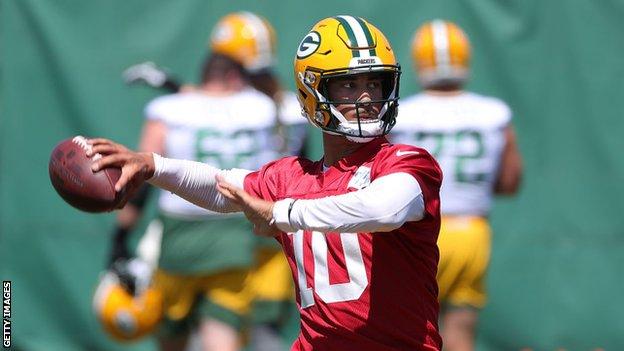 Jordan Love has been a busy man during the Packers' minicamp

Although Green Bay signed ex-Jacksonville Jaguars quarterback Blake Bortles last month, he hasn't started a game since 2018, so in the same fans Q&A,external-link Murphy said the Packers "remain committed to resolving things with Aaron and want him to be our quarterback in 2021 and beyond".

His reply to a question that didn't even mention Rodgers didn't seem much of an olive branch though.

Murphy wrote: "The situation we face with Aaron Rodgers has divided our fanbase. The emails and letters that I've received reflect this fact. We realise that the less both sides say publicly, the better."

How did Tom Brady turn the Tampa Bay Buccaneers into contenders?

What have his team-mates said?

Rodgers may be 37 but he's the reigning MVP and plans to play well into his 40s, just like Tom Brady.

A year out may do his body good and he can cushion the financial blow, but how would being a holdout affect his reputation?

Green Bay's star receiver Davante Adams said he'd "scream from a mountaintop that I've got his back".

"If there's ever a wonder if he's lost a team-mate or something because of all that's come out, he knows where I stand," he added.

Offensive tackle David Bakhtiari said: "He's my friend, so whatever the situation, I will never hold any grudge against him. As a team-mate, I would be idiotic to say that I don't want the MVP back. He's done amazing things for this franchise."

And Rodgers could always go for the role of permanent host of Jeopardy!

"It would be a dream job," he said.external-link "And I'm not shy at all about saying I want it."