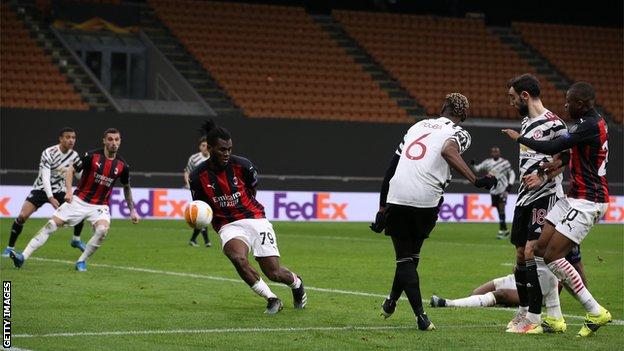 Paul Pogba returned from injury to send Manchester United into the Europa League quarter-finals and manager Ole Gunnar Solskjaer says the midfielder will continue to make a big impact in the final stages of the season.

The Frenchman scored the winner against AC Milan at the San Siro three minutes after being introduced as a half-time substitute in the second leg of an evenly poised last-16 tie.

"The boys have done remarkably without Paul but we know his qualities," Solskjaer said.

"He makes a very, very big difference to us. Paul has been working really hard, but you could see he couldn't play more than 45 minutes."

The 28-year-old was making his first appearance in the competition this season, after coming back from a thigh injury which has kept him out since 6 February.

Until his intervention, Solskjaer's side had rarely looked like breaking the deadlock against a well-organised Milan team who also appeared capable of adding to the late away goal that had swung the tie in their favour at Old Trafford.

Rade Krunic, Alexis Saelemaekers and Theo Hernandez all threatened the visitors' goal before the break.

Zlatan Ibrahimovic was summoned from the bench to try to rescue the tie, but United goalkeeper Dean Henderson superbly saved to prevent the Swede from scoring against his former team with a back-post header.

Henderson, who was excellent throughout, also brilliantly turned away an earlier effort from Saelemaekers.

United join fellow English side Arsenal in the draw for the quarter and semi-finals on Friday at 12:00 GMT.

Prior to this fixture, Solskjaer had stressed that winning a cup competition should not be used to determine whether the club had progressed since he took over in December 2018.

But after losing four semi-finals over the past 12 months, a defeat here would have left him facing serious questions over whether his players have the ability and mental fortitude to develop a winning habit.

With Manchester City out of sight in the Premier League, it would have also placed even greater importance on their tricky FA Cup quarter-final at Leicester on Sunday.

Pogba's introduction and goal means they are still in the mix to win a competition that produced their last piece of silverware in 2017.

It was far from a vintage display and with Edinson Cavani absent, United appeared to lack nous at the sharp end of the pitch.

However, Pogba, who came on for Marcus Rashford, provided what they appeared to be missing in the first half – the guile, composure and good decision-making required to make a difference in front of goal.

Fred's persistence unquestionably helped as the hosts missed the opportunity to clear their lines on more than one occasion but Pogba's finish had an air of authority about it, as he controlled the ball, feinted and then dispatched his effort past the helpless Milan goalkeeper Gianluigi Donnarumma.

Having not played for nearly six weeks, Pogba could have been forgiven for displaying some ring-rust in a role wide on the left but his simplicity of passing helped United improve and see out their victory.

While Pogba provided the difference at one end of the pitch, United will also leave Italy thankful for Henderson's form at the other.

The 24-year-old was criticised in the aftermath of the first leg for failing to save Simon Kjaer's added-time equaliser but he atoned in perfect fashion.

His reflex save to deny Ibrahimovic only told part of the story of a near faultless display.

Henderson has now kept 11 clean sheets in 18 appearances for the club and is making a determined case to be considered ahead of long-time number one David de Gea.

The Spaniard has kept 10 clean sheets in 29 matches this season but aside from just the numbers, Henderson is also impressing with his communication and appears to have gained the confidence of United's back four.

"I thought David was lucky after the Everton game to keep his place and there were a few things before and after that. I just feel a bit more confident with Henderson there and I think the time has come to give him a run of games in the team.

"He possibly should be number one for England as well if he maintains his form. He made a mistake in the first game and showed great character to come back. He was really calm tonight, did everything he needed to and was very safe."

Fellow pundit Owen Hargreaves added: "I think it will be hard for David to get him out, as good as he has been. Outside of the first leg, Dean has produced and he is a very confident and vocal guy."

Manchester United have progressed from their past two knockout ties with AC Milan in European competition, having been eliminated in the four ties beforehand (European Cup in 1957-58 and 1968-69, Champions League in 2004-05 and 2006-07). Manchester United have only lost one of their past 20 knockout stage matches in the Europa League (W12 D7), a 2-1 defeat by Sevilla in the 2019-20 semi-final. Milan have lost five of their past six home games against English teams in European competition (W1), after going unbeaten in their first 13 such matches (W8 D5). Paul Pogba has scored in his past two away games versus Milan (also for Juve in April 2016) – while this was just his second goal as a substitute for the Red Devils in what was his 31st such appearance (also scored v Brighton in September 2020). Harry Maguire has played more minutes than any other Premier League player in all competitions this season (3,855 mins), with no United player making more clearances (five) or interceptions (five) versus Milan on Thursday.

'We've missed Paul' – what they said

"Dean Henderson made a fantastic save towards the end and I'm very pleased with everyone's defending. We know the back six, with the likes of Scott McTominay and Fred, always give everything.

"There are many good teams left but you've got to be spot on. It's a cup competition and anything can happen. But we are through and we feel confident."

On goalscorer Paul Pogba's performance: "We've missed Paul. He's been out for almost two months and any team would miss a player like Paul Pogba. He is very important for us and he's going to give us a big boost. He makes a very, very big difference to us."

Manchester United travel to Leicester City in the FA Cup quarter-final which will be broadcast live on BBC One on Sunday (17:00 GMT).

Second-placed AC Milan visit Fiorentina on Sunday (17:00 GMT) in their next fixture in Serie A.