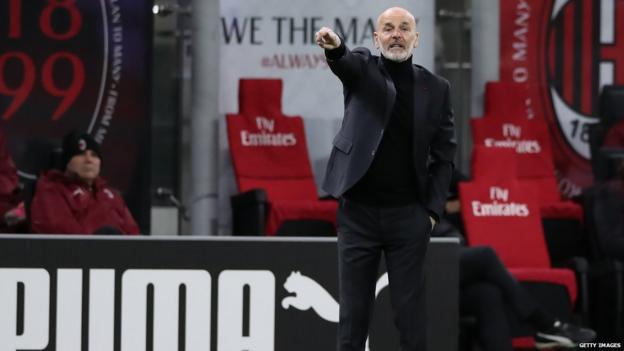 As a player, Pioli won a Serie A title and European Cup with Juventus

When Stefano Pioli was appointed AC Milan boss 17 months ago, he was anything but a sexy choice.

After all, Milan were famous for initiating a tactical revolution under Arrigo Sacchi and for winning in Europe with the likes of Carlo Ancelotti, his Christmas tree formation, and his eyebrows.

Pioli was simply a boy who yearned for Ancelotti's leftovers – literally.

"Once when I was playing in the youth sector of Parma [season 1978-79] I even picked up a pair of boots that he [Ancelotti] had thrown away at the end of a first team match," he once said.

"I was a ball boy but I took the shoes and then I wore them for some matches. I really admired him."

Should his side turn their 1-1 draw away at Manchester United into a win in Thursday's Europa League last-16 second leg, he could be deserving of a more exciting nickname, even if his roots are somewhat ordinary.

Hailing from a family of postmen, both of Pioli's brothers and his father delivered mail for a living, supported Milan's rivals Inter and were involved in football in some way at an amateur level.

Stefano, married to his high school sweetheart and with a penchant for Sandra Bullock movies,external-link imagined that he too would have a similar life – except he was rather good at playing the game.

Managing a decent footballing career, Pioli was successful with Juventus and went on to forge a stable career in coaching that saw him take Lazio into the Champions League, navigate the difficult waters at Fiorentina after the death of their captain Davide Astori, and even manage a six-month stint as head coach of his beloved Inter, after they sacked the disastrous Frank de Boer.

Pioli was seen as a safe pair of hands for Milan after the departure of Marco Giampaolo, and while the club planned the launch of yet another new project over the summer.

He was grateful for the opportunity and took it as a chance to fight for his vision and his future.

The technophile with his own app

A progressive pragmatist, the former Fiorentina coach communicates well with his players, prepares extensively for each match and uniquely combines old fashioned ideals with modern approaches.

A fan of technology, during his time in charge of Chievo Verona, he was the first coach to collaborate with Panasonic and make use of 3D technology to film everything about his players to better enhance their positioning, postures and in-game management.

At Milan, alongside his son Gianmarco, he created an app that is uploaded with detailed information on every opponent their players will face over the next week with videos and information to help them prepare.

His players speak of being listened to and appreciated and, once they enjoy their football, the results tend to flow.

Both Davide Calabria and Franck Kessie have admitted to teething problems in communicating with the coach, yet both have developed exponentially under his tutelage.

Hakan Calhanoglu, the creative spark within the team who started to live up to expectations after Pioli's arrival, insisted: "We're really lucky to have a coach like this working with us."

'A good coach but not modern'

After an inconsistent start at the helm, help was provided by the way of two veterans, Zlatan Ibrahimovic up front to take the pressure off the youngsters and Simon Kjaer at the back to marshal their defence.

With the benefit of a little time to establish relationships with the players and the help of the experienced new arrivals, Pioli's Milan lost only two Serie A matches in 2020. After lockdown, they were almost unstoppable, winning nine of their final 12 games to finish sixth, having been as low as 11th at the end of 2019. 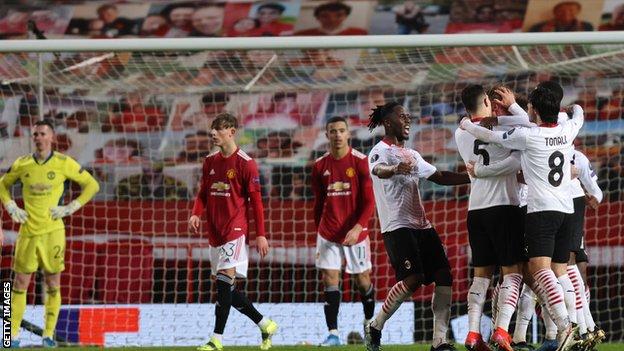 With continuous speculation about his future, Milan could no longer ignore the ridiculous number of points Pioli had collected, and the effusive praise of his players and club legend Paolo Maldini, who said the manager had a "special role" at Milan,external-link and he was awarded a new contract in the summer.

The team was happy, the youngsters were playing with authority and a seemingly sleeping giant was being awakened by a man Sacchi, Milan's double European Cup-winning manager, felt "was a good coach but not modern".

Pioli doesn't succumb to the trend to playing out from the back, something both Atalanta and Juventus tried, without the required personnel, to their cost when they were knocked out of the Champions League by Real Madrid and Porto respectively.

Against Manchester United, we saw a beautifully assembled Milan that were well coached and well aware of their duties despite playing without six regular starters.

Pioli has given this team an identity that has coped even with all the absences. However, exhaustion in a congested season has eventually led to the team shedding points in the Serie A title chase this season, with them second and nine points adrift of Inter.

A Scudetto might have been a dream too big for the Rossoneri as they are still some way off boasting the talents of their city rivals Inter and Juve, but in Pioli the postman, Milan believe they have a man who will deliver.