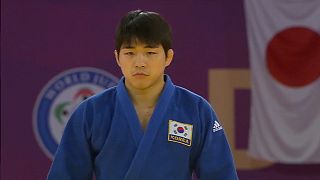 On day two of the 2021 World Judo Masters, our woman of the day was four-time World Champion Clarisse Agbegnenou, who was once again on top form, dispatching her early opponents in the -63kg category with an incredible display of ura nages.

In the final, the French judoka faced Nabekura Nami of Japan – in a repeat of the 2018 and 2019 Masters. At 2-1 up, Agbegnenou consolidated her lead with a beautiful kosoto gari, to take her second Masters title. Marius Vizer, President of the International Judo Federation, awarded the medals.

You have to get your self-control and wait until the end. And the end, when is it? You never know.

“I knew that it was going to be a hard fight because she is a good fighter and the Japanese are always hard to fight,” Agbegnenou said afterwards. “I was thinking – you have to get your self-control and wait until the end. And the end, when is it? You never know. So just keep it up, keep it up and just go.”

Georgia’s rising star Tato Grigalashvili is our man of the day. After his recent European Gold, he was clearly set on nothing less than gold in the -81kg masters too, scoring ippon in all but one of his contests. In the final, Grigalashvili was up against the hard battling dutchman Frank De Wit. Grigalashvili won it with a waza-ari scoring sasae tsurikomi ashi – followed immediately by a decisive armlock for ippon. Florin Daniel Lascau, Head Sport Director of the International Judo Federation, presented the medals.

In the men’s -73kg category, 2018 World Champion An Chang-rim took his first Masters gold – defeating Japan’s Hashimoto Soichi in the final. Manuel Larranaga, the Vice President of the International Judo Federation, presented the South Korean with his medal.

Yoko Ono from Japan was in her first-ever Masters final in the -70kg category and she won it by defeating Russia’s Madina Taimazova in osaekomi, also applying an armlock. Vladimir Barta, Head Sport Director of the International Judo Federation, presented her with her gold.

And an ippon from Mongolia’s Tsend-Ochir was our moment of the day.

Next up in Doha- the heavyweights!