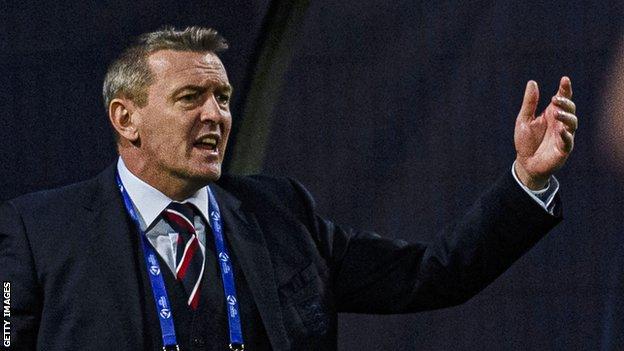 Aidy Boothroyd is stepping down as England Under-21 manager two weeks after his side's European Championship exit at the group stage.

The 50-year-old had described the role as "the utterly impossible job" during the tournament, but added he was still the right person for it.

Boothroyd, whose contract expires in the summer, moves on after seven years with the Football Association.

"We didn't finish in the way we wanted," said Boothroyd in a statement.external-link

"It's been the greatest privilege to represent the FA and lead England teams into high-profile tournaments.

"I'm very proud to have been able to work so closely with players who I know will go on to have remarkable international careers and to have experienced some very special moments with them over the years."

Boothroyd's England finished bottom of their group at the Under-21 Euros last month, losing to Portugal and Switzerland before beating Croatia in their final match.

It was the fifth time in six competitions that England have gone out at the group stage.

Boothroyd, who guided his side to victory in the prestigious Toulon Tournament in 2018, had previously said the way the England international set-up is structured limits the chances of the under-21s winning tournaments.

He echoed that stance in the FA statement announcing his departure, thanking staff and saying: "In every single get-together they embraced our unique challenge of rightly prioritising the needs of the senior team while ensuring we gave our all to try and get a positive performance and result."

"His pride in working with all of our development teams has shone through and his support of the senior team has been greatly appreciated," Southgate added.

Boothroyd is said to want to return to club football, having previously worked at Watford, Colchester, Coventry and Northampton.

"Of course, our final result did not end in the way we had all hoped but his legacy will be that he gave everything for the squad to be successful and his commitment to developing young players is unquestioned," McDermott added.