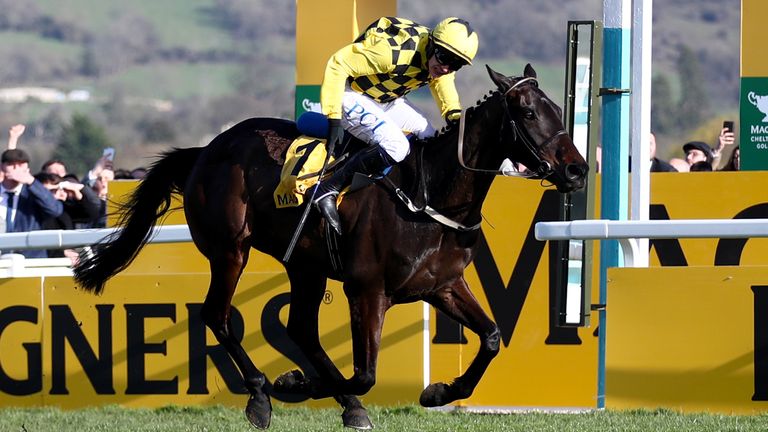 Al Boum Photo has an enhanced opportunity to add the Ladbrokes Punchestown Gold Cup to his two famous Cheltenham titles.

Willie Mullins’ dual Cheltenham Gold Cup hero had to settle for third behind Minella Indo last month in his quest to join the most select group of racing greats as a three-time winner.

There will be no Minella Indo in his way on Wednesday, though, after trainer Henry de Bromhead ruled the eight-year-old out of his scheduled final run of the season because of a bruised foot.

While Minella Indo is fully expected to be back to defend his Cheltenham crown next year, his Punchestown absence leaves a field of just six.

Al Boum Photo will be ridden by Paul Townend following his Gold Cup-winning jockey’s return to fitness from a foot injury.

They are the new favourites to gain revenge on stablemate Kemboy, who beat them in this race in 2019 and is therefore the most recent winner.

Paul Nicholls’ dual King George VI hero Clan Des Obeaux is a major contender too, travelling over to uphold British honour after the home team’s eclipse in so many races at Cheltenham.

Mullins senses Al Boum Photo was possibly not quite firing on all cylinders in his Cheltenham hat-trick bid.

“People could say that Al Boum Photo’s run might have been good enough to win the last two Gold Cups, and he just met two good horses on the day,” he said.

“I’m not saying he’d have won the Gold Cup, but I thought he could have run better – maybe he didn’t fire as well as he has (in the past).

“Certainly the last five jumps weren’t as strong as they were last year. He has worked well in the meantime, and I’m happy with him where he is at the moment.”

Kemboy’s two-length victory from Al Boum Photo two years ago was a result which sparked pandemonium as the winner’s jockey Ruby Walsh announced his immediate retirement after the race.

Mullins – who also runs Melon, in the Al Boum Photo colours, and Easy Game – added: “Kemboy worked very well the other morning; I was very pleased with him.”

Clan Des Obeaux, the sole British challenger, certainly has the right credentials to mix it with the best of the Irish – and was right back to his very best when winning by 26 lengths at Aintree this month.

However, he will face a completely different test to the one he passed that day.

“He won well at Aintree the other day, but he has obviously won the King George twice – and going right-handed seems to suit him better,” said Nicholls.

“He’s a much more mature horse now. Cheltenham doesn’t suit him at all – that race and the ground at the time. This is much better for him.

“He does seem to like this time of year when the sun is shining and looks great.

“If he performs like he did at Aintree the other day, he’s going to be right in the mix.”

Sam Twiston-Davies, on board for the second of Clan Des Obeaux’s King George victories in 2019, is reunited with the nine-year-old – in place of Harry Cobden, who suffered a season-ending injury shortly after their victory together at Aintree.

Twiston-Davies said in his William Hill blog: “I’m very pleased to be asked to step in and ride Clan Des Obeaux while Harry is out on the sidelines.

“He felt brilliant in the early part of the season when I rode him at Haydock, finishing second on heavy ground, but then things didn’t quite work out for us in the King George at Kempton.

“It was a funny race – we didn’t get a very smooth run around, and he made a couple of mistakes down the back, but there’s no hiding what he did at Aintree last time out – he was very impressive.”

After Clan Des Obeaux’s three placed runs at Haydock, Kempton and then Newbury in February, Nicholls took Cobden’s advice to fit him with cheekpieces for the first time at Aintree – and the result was an emphatic win in the Grade One Betway Bowl.

Twiston-Davies added: “He jumped nicely, got himself into a good rhythm – and if he’s able to do that on Wednesday, then we should be in for a massive run.

“He’s at a nice age as a nine-year-old. Physically and mentally he looks the complete package, and he should be right near his peak now.

“Punchestown is a beautiful, right-handed track that should suit him well – although he’s just as good going the other way round.

“I’ve only ridden the track a handful of times and will always remember winning the Champion Hunters Chase there back in 2009 on Baby Run.

“This is obviously a bit of a different task to that, but I’ll have a good walk of the track, get all the information I can and make sure we’re fully prepared for whatever it throws at us.

“He’s a very classy horse that still manages to get through the heavy ground, but it doesn’t see him at his best, so the expected good, good to soft ground will be ideal for him.”

The field is completed by Joseph O’Brien’s Fakir D’oudairies, another winner from Aintree who steps up to three miles for just the second time in his career.