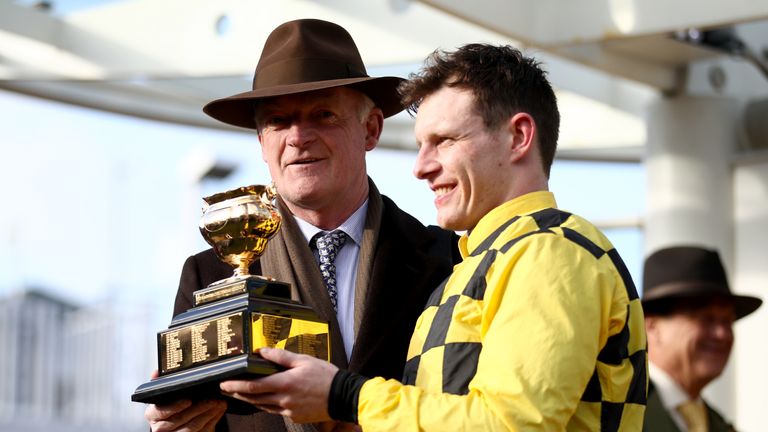 Al Boum Photo is among a field of 12 as he seeks to join an elite list as a three-time winner of the WellChild Cheltenham Gold Cup.

Only Golden Miller (five times), Cottage Rake, Arkle and Best Mate have won chasing’s blue riband event three years in a row – and Willie Mullins’ charge is favourite to join them on Friday.

Ireland’s champion trainer also runs Kemboy, a multiple Grade One winner in his own right who is having his third run in the race, having unseated his rider in 2019 and finished seventh last year.

Perhaps an even bigger story, though, would be if Champion Hurdle victor Rachael Blackmore were to complete a historic double on Henry de Bromhead’s A Plus Tard, who came from the clouds to win the Savills Chase at Christmas.

He is owned by Cheveley Park Stud, and their managing director Chris Richardson said: “He travelled well, and Henry seems very happy with him.

“He was very impressive in the Savills. He didn’t look the winner there as he turned for home, but we were delighted that he won in the last stride and got the trip so well.

“It’s a dream to have a runner in the Gold Cup.”

De Bromhead also has a decent second string in Minella Indo, who went close to winning for a second time at the meeting last year when second to the fast-finishing Champ in the race now known as the Brown Advisory Novices’ Chase.

Nicky Henderson’s Champ has not had the ideal preparation, but he did finally reappear in the rearranged Game Spirit 26 days ago over two miles, and he takes his chance in the Festival feature.

He is the mount of Nico de Boinville, meaning the ride on last year’s runner-up and stablemate Santini goes to Aidan Coleman.

Just behind Santini and Al Boum Photo 12 months ago was Colin Tizzard’s Lostintranslation, but he has failed to run to form three times this season and needs to bounce back.

Tizzard’s veteran Native River is also back for another run in the race – having finished third, first and fourth previously.

Having won the Ryanair Chase two years ago, Frodon needs to prove his stamina for this trip, but a victory would mean Paul Nicholls joins Tom Dreaper on five wins in the great race.