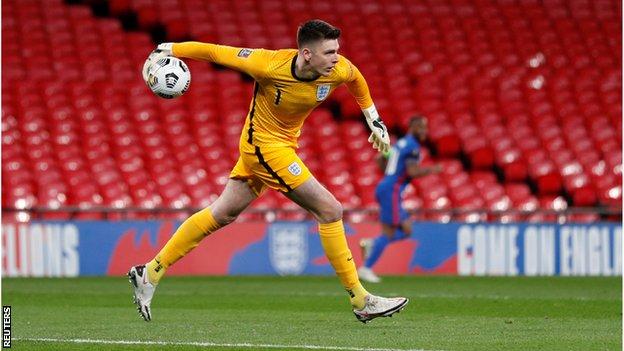 England manager Gareth Southgate has selected Nick Pope as his starting goalkeeper for the World Cup qualifiers against Albania and Poland.

The Burnley player, who started Thursday's 5-0 win over San Marino, appears to be first choice behind the injured Jordan Pickford.

The other keepers in the squad are Manchester United's Dean Henderson and West Bromwich Albion's Sam Johnstone.

"He has consistently played at a high level for his club," said Southgate.

"He is a very calm character and I really like his personality.

"We obviously knew he was not going to be overworked [against San Marino], but I am sure that will be different in the next games."

Pope, 28, a member of the 2018 World Cup squad, has made only five appearances for his country. He could become the first England keeper to concede no goals in his first six appearances when he faces Albania on Sunday.

Harry Maguire was also a member of that squad which reached the semi-finals. He believes England have improved as a collective since.

"I think over the three years we've developed, we've worked more tactically, the experience of the big tournament, the highs and the lows," the 28-year-old said on the eve of the World Cup 2022 qualifier.

"We've got to take that experience into the coming tournaments. I'm sure that will help us. Of course as a player and as a team three years is a long time to develop and we have developed in a positive way."

The centre-back did not play in Thursday's victory which put England in pole position in Group I. Sunday's opponents also have three points, although they only beat minnows Andorra by a solitary goal in their opening qualifier.

James Ward-Prowse scored his first goal for England last week and featured in an inexperienced midfield, with Liverpool's Jordan Henderson out injured and a doubt for this summer's European Championship.

Southgate said he was happy with the remaining midfielders at his disposal, including Chelsea's Mason Mount and West Ham's Declan Rice, who are friends from childhood.

"They did very well in the game we played against Iceland," said Southgate.

"Obviously that deeper position, Mason doesn't play for his club but I think it's possible for him. He's a very intelligent player, he can play four, eight or 10. I think he would be able to adjust as required.

"There's no doubt the balance of those two is good. But equally Ward-Prowse was good [against San Marino] the other day and Kalvin Phillips is in excellent form as well.

"It's an area on the pitch where we are starting to get some options."

England have won all four of their previous matches against Albania, with all games coming in World Cup qualifiers for the 1990 and 2002 tournaments.On the day of this game, it will be exactly 20 years since England last played in Albania, winning 3-1 in Tirana in March 2001 with goals from Michael Owen, Paul Scholes and Andrew Cole.Albania have won their past four international matches – their best run since August 2010 – but have never won five consecutive matches.England have lost just two of their past 29 away matches in World Cup qualifying campaigns (W19 D8), losing to Northern Ireland in September 2005 and Ukraine in October 2009.England have scored 42 goals in their past nine qualifiers for major tournaments (W8 L1), netting five or more goals in six of those games under Gareth Southgate. The only Three Lions boss to see England score five or more goals in as many qualifiers was Sir Bobby Robson – also with six.Albania are looking to start their World Cup qualifying campaign with two consecutive wins for a second time, also doing so in their last campaign before the 2018 World Cup. They defeated Andorra 1-0 in their first match of this campaign.England's Harry Kane has scored in each of his past seven away qualifying matches for the Euros/World Cup, the longest run by an England player. Kane has scored at 16 different stadiums as an England player, with this the Three Lions' first game at the Arena Kombetare. Only Tom Finney (17), Michael Owen (25) and Wayne Rooney (27) have scored a goal at more different stadiums for England than Kane.
Source