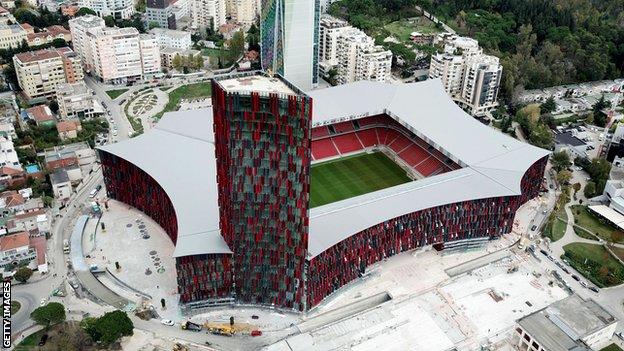 England are due to arrive in Albania on Saturday

England's World Cup qualifier against Albania in Tirana on Sunday is at risk of being called off because of an issue over security.

The Albanian Football Association (AFA) said it has been informed by local police that the force cannot guarantee the safety of the teams.

"We will continue to liaise with the relevant authorities," the English Football Association said.

England open up their campaign against San Marino later on Thursday.

The next fixture should be against Albania, followed by Poland next Wednesday.

The AFA's dilemma follows its request for a restricted number of fans vaccinated against Covid-19 be permitted to attend the game, which was rejected by government.

The Group I match will therefore be played behind closed doors, and with no other lockdown measures in place in in the country it could mean the area around the the Air Albania Stadium could be busy, seemingly with no promise of adequate policing.

The AFA statement read: "Today a letter arrived which states that the structures of the local police directorate of Tirana do not guarantee the taking of measures before, during and after the Albania-England match on 28 March.

"Faced with the situation where the state authorities did not react after the request of the Albanian Football Federation for the release of spaces on the perimeter of the national stadium, we request urgent response of these structures.

"The cancellation of the Albania-England match scheduled to be played at Air Albania Stadium would have catastrophic consequences for the image of our country, the national team and in general for Albanian football."