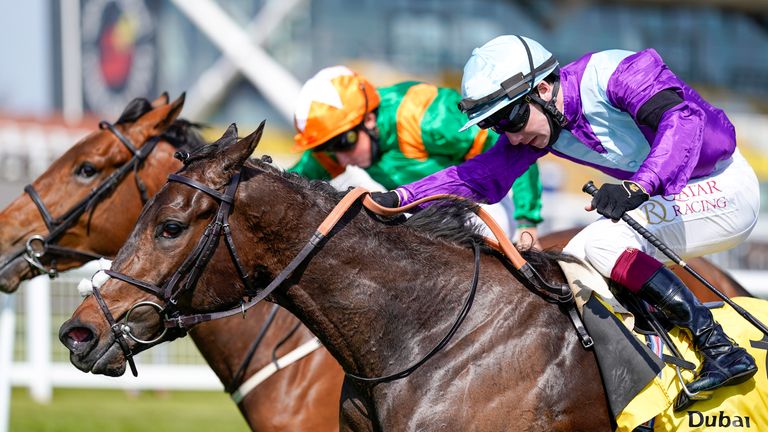 Alcohol Free booked her Qipco 1000 Guineas ticket as she narrowly came out on top from Statement in a tight finish to the Dubai Duty Free Stakes at Newbury.

Andrew Balding’s filly was the only Group One winner in the race better known as the Fred Darling, and as a result she was sent off the 9-4 favourite.

Caught wide and with no cover through most of the seven-furlong contest, Oisin Murphy brought his mount through to take up the running over a furlong out and it all looked to be going to plan.

However, Alcohol Free began to hang slightly, making Murphy’s task harder, and to compound matters Statement had burst out of the pack to throw down her challenge.

Statement would not go away, but the Jeff Smith-owned Cheveley Park winner held on by a determined short head. Two outsiders took minor honours, with the Charlie Fellowes-trained Vadream coming from almost last into third and Ed Walker’s 100-1 chance Primo Bacio fourth.

“We’ve said for the last week if she just ran a nice race and finished placed and showed us that she’d trained we’d be happy, as she hasn’t done a huge amount of work,” said a delighted Balding.

“So it was very pleasing to see her win like that. She stayed the seven furlongs well and it wasn’t easy for her caught on the wing. She settled well and Oisin has given her a lovely ride. Oisin seems pretty confident she’ll stay a mile.

“The idea was that this was a stepping-stone to the Guineas – I think she only got one flick behind the saddle as it wouldn’t have been ideal if she had a hard race.

“She’s been slow coming in her coat and I haven’t done much with her, which is why we weren’t really expecting to win. But this is really encouraging because we know she’s still got it, stayed seven well and Oisin said she was beautifully settled so the 1000 Guineas is definitely the plan.”