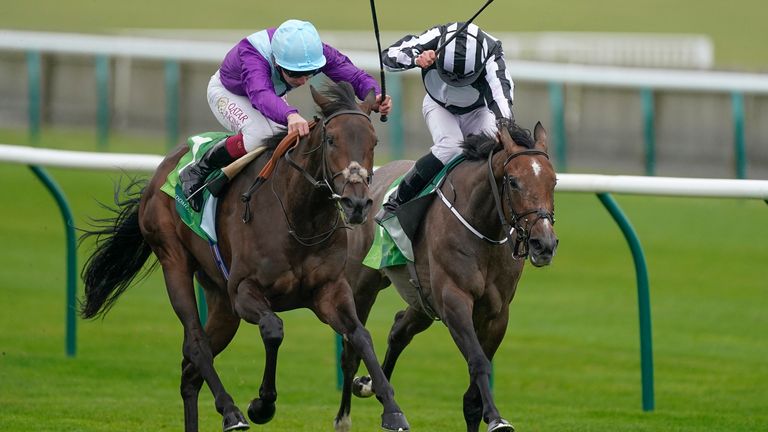 Alcohol Free and Happy Romance are set to clash for a third time in Sunday’s Dubai Duty Free Stakes at Newbury.

The score stands at one victory apiece, with Richard Hannon’s Happy Romance coming out on top in the Dick Poole at Salisbury before Andrew Balding’s Alcohol Free turned the tables in the Cheveley Park Stakes at Newmarket.

The pair appear among 23 entries for the Group Three, registered as the Fred Darling and a recognised trial for the 1000 Guineas.

“We’ve given her an entry in the Fred Darling at Newbury on Sunday and at this stage that is very much an option,” said Balding of his Group One winner.

“Ideally we were keen to have a run, particularly because we’d be asking her to go a mile first time out if we went straight for the Guineas.

“We just think we’d be better placed if she’d had a run.

“It’s not the be-all and end-all, but the intention is to try to run on Sunday.”

Hannon is confident his filly can improve on a lucrative juvenile season and has no doubts about her stepping up in trip.

“She was just on the wrong part of the track, she had to come a bit wide and the winner slightly had the run of the race (in the Cheveley Park),” he said.

“I’ve been very happy with her work and, for me, she was never just a two-year-old. I know she had a busy season, but hopefully she can do better this year because she’s grown and she’s done very well.

“We’ve been very pleased with her work and I think she’ll get a mile no problem. I know it’s seven this weekend, but I think she’ll end up over a mile without any issues.

Royal Ascot winner Dandalla, the Clive Cox-trained Isabella Giles and Richard Fahey’s Umm Kulthum are all in the mix.