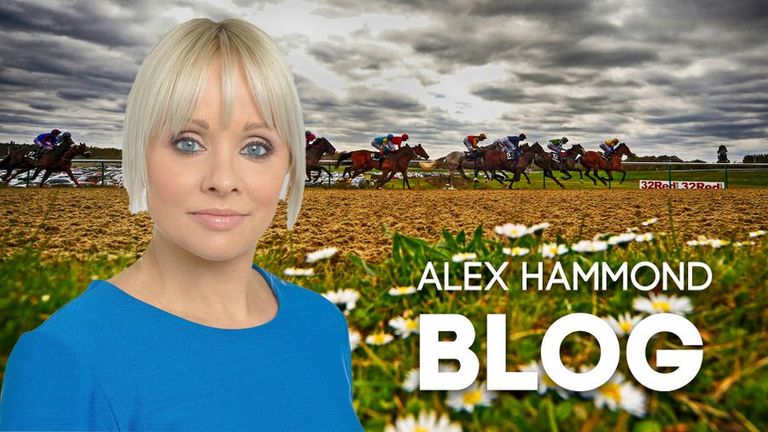 Sky Sports Racing’s Alex Hammond reflects on the Cheltenham Festival she watched from afar before previewing the Lincoln at Doncaster where she’ll be working this weekend.

The Cheltenham Festival delivered everything, and perhaps even more than we’d hoped, despite the fact we had to watch from afar.

We were dazzled by the brilliance of Rachael Blackmore and left shivering in the shadow cast by the Cloud Nine her fellow Irishmen were floating on. Every cloud has a silver lining they say and my fellow Brits have now been forced into a period of reflection and rebuilding which will hopefully be the road to redemption (in fact a more level playing field would probably do!).

Respect to all the winners and my goodness we saw some spectacular performances over the four days. Those that topped my list were Honeysuckle’s win in the Champion Hurdle, Bob Olinger’s in the Ballymore Novices’ Hurdle, Allaho in the Ryanair and one for the UK, Shishkin’s victory in the Arkle.

Those that thrilled and exhilarated me were the final two winners on the fourth and final day. Colreevy’s scrap with stablemate Elimay in the Mares’ Chase and the performance of Galopin Des Champs in the Martin Pipe Conditional Jockeys Handicap Hurdle made it a particularly good week and one I’ll remember fondly.

Some years I come away from Cheltenham picking at the metaphorical lint in the lining of my not very deep pockets and others I’m happy to break even. This year was thankfully more successful than that and softened the blow of distance between me and Prestbury Park.

The most notable winner though was racing itself. With the right ingredients you can cook up something fabulous and Cheltenham laid on a mouth-watering spread. Ireland may have cooked up a storm, but we racing fans savoured every mouthful. Much is made of the dominance of this four days in the calendar, but if it can take us away from some of the desolation of the past twelve months and allow some uninhibited joy, more power to it I say!

From festivals to flat racing and Doncaster’s two-day fixture this weekend marks the start of the turf season with Saturday’s Lincoln the feature.

Sky Bet are paying five places in the mile handicap, which gives us scope to find a bit of value.

You can make strong cases for the likes of Eastern World, Haqeeqy and Brentford Hope. Eastern World is Sky Bet’s 3/1 favourite after a comfortable success in handicap company at Meydan last month.

He’s a half-brother to multi-millionaire Thunder Snow and there could be much more improvement to come from this son of Dubawi, so the 5lb penalty he gets for winning in Dubai may not anchor him. It won’t be a surprise to see him flying much higher before the year is out, so he has an obvious chance of winning this.

Haqeeqy has been gelded since we last saw him in September and is 100/30 second favourite at the time of writing. He won a 7f handicap at this venue, skipping away from the rest of the field that day and is another that should be capable of progressing beyond handicaps.

His trainer John Gosden has booked his apprentice Benoit De La Sayette to claim 7lbs off his back, which just about negates the 8lbs he was raised for that win last Autumn, but this will be a higher pressure task for his rider than in the 30 odds rides he’s had in his professional career so far.

He’s well thought of though and the 7lbs is a big help, but his lack of experience could be a concern; but that’s the whole point of the apprentice claim of course.

Brentford Hope (6/1) is a horse I’ve watched with interest as he had a pretty hefty reputation when he first set foot on a racetrack. Things didn’t appear to quite go to plan and he was gelded in the summer, but subsequent performances suggest we haven’t seen the best of this four year old just yet.

His trainer Richard Hughes has his team in good form ahead of the start of the turf season. My concern is that the ground may not be soft enough for him, but other than that, he is right up the top of my shortlist amongst the protagonists. So, where might that elusive value lie?

The Andrew Balding trained GROVE FERRY had a serious case of place-itis last season, but it was good to see him back in the winner’s enclosure at Lingfield last month and the 5lbs penalty he picks up for winning there will be completely negated by apprentice William Carver’s claim.

Carver is based with Balding and is well worth that 5lbs claim, he only needs to ride 5 more winners to reduce that to 3lbs. So at 14/1 with Sky Bet I’d like him in my team for this competitive turf season curtain raiser.

Trainer Andrew Balding could have a good day at Doncaster

In fact, I think it could be a good day for Andrew Balding who also runs Bounce The Blues in the Listed Doncaster Mile.

She’s Sky Bet’s 3/1 favourite and is already a winner in this grade when trained in Ireland. It’s the form of her second place to Cloak Of Spirits on her final start of 2020 that stands out though. The filly that beat her that day went on to finish third in the group 1 Sun Chariot Stakes, so it looks very solid.

In opposition is Father of Jazz and I’m curious to see if he can bounce back from his disappointing run in the Winter Derby last time, as he’s a real quality individual. I was lucky enough to be a Lingfield that day and was really taken with him in the paddock beforehand.

I expected to see something special from him, but he could only finish third and all in all it was pretty unsatisfactory. I’m certain we haven’t seen the best of him yet though and perhaps the drop to this mile will suit him better.

It’s a busy day at Sky Sports Racing HQ on Saturday and I’m looking forward to being in the studio for the afternoon. Along with Doncaster we’ll also be showing you the action from World Cup night in Dubai. It seems astonishing that we are already celebrating the 25th anniversary of this valuable race. Do you remember who won the inaugural running back in 1996?

Cigar and Jerry Bailey were the first winners of this race, which has now become well established in the international calendar. It would be wonderful to see Salute The Soldier win the World Cup as he’s been running into form and has taken to the dirt like a duck to water.

Whilst he won over a mile and a quarter last time out in round 3 of the Al Maktoum Challenge, his stamina may be put under more pressure in this field, but having said that he looks capable of running into a place if he can overcome his wide draw (8/1 with Sky Bet).

The evening has attracted some quality horses from all over the world, but of course it is likely to be a sombre occasion now given the sad death of Sheikh Hamdan Al Maktoum this week at the age of 75.

My first job in racing was at his Nunnery Stud in Thetford, which was a superb step on the ladder in a sport I had admired from afar as a teenager. Sheikh Hamdan has been a loyal employer and supporter of racing in the UK and worldwide and will be much missed by those who worked for him.