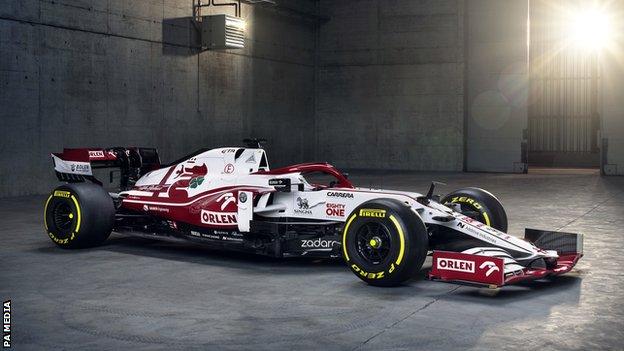 The Alfa Romeo team have launched their 2021 Formula 1 challenge with the aim of improving on a disappointing season last year.

Alfa Romeo finished eighth in the constructors' championship in 2020 after a year battling at the back of the field.

Team principal Frederic Vasseur said: "We want to improve. All the team is motivated by the same target.

"We have to step by step work back to the top of the midfield."

Driver Kimi Raikkonen said: "Hopefully we are better off than last year."

F1 teams are restricted by regulation on the amount of changes they can make to their cars into 2021.

Technical director Jan Monchaux said the team had spent these on a new nose design, a structural part of the car that also has an aerodynamic influence.

He said the front suspension and front wing, the aerodynamic shapers around the middle of the car and the floor at the rear had been the biggest changes.

These modifications were aimed, he said, at recovering the aerodynamic downforce lost by a series of rule changes that have restricted the floor area.

Alfa Romeo were in a fight with Williams and Haas towards the back of the grid for much of 2020 and on average had marginally the slowest car in the field over one lap in qualifying.

Vasseur said: "I hope we will close the gap. We have some high expectations on some areas of the car. We know we have a good step forward. We have huge expectations and we will see what happens."