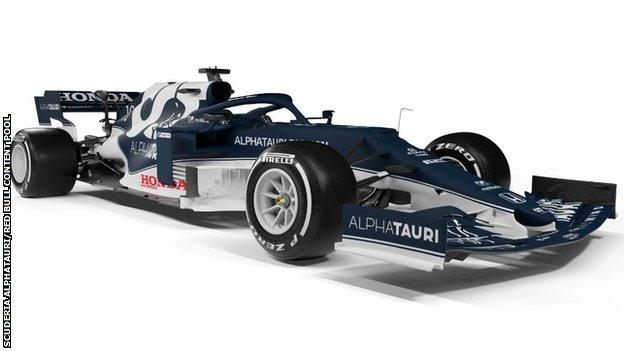 Alpha Tauri have set themselves the target of running consistently at the front of the midfield in 2021 as they launched their new AT02 car.

Team boss Franz Tost said: "In 2020, we were fighting against other teams like McLaren, Renault and Racing Point.

"But our target for this year is to consistently be at the top of the midfield pack and improve further."

Gasly stays on for 2021, in what will be his third full season for the team and fourth in F1. The 25-year-old Frenchman is joined by Japanese novice Yuki Tsunoda, who replaces Russian Daniil Kvyat.

Gasly was promoted to Red Bull's senior team in 2019 after an impressive debut season in 2018, but was demoted back to the junior team halfway through the year.

But he excelled on his return, taking a second place in the 2019 Brazilian Grand Prix, and continued to perform strongly through 2020, when he was one of the field's stand-out drivers.

Gasly contracted coronavirus while training in Dubai last month but said the disease had not had any debilitating effects.

Gasly said the arrival of a rookie in Tsunoda meant he would "have more responsibility in the team and I'm ready to take on the role of team leader".

Tsunoda is a long-time protege of engine partner Honda and arrives in F1 after a strong debut season in Formula 2, in which he finished third.

The 20-year-old said his ultimate target was to become the first Japanese to win a Grand Prix.

Tsunoda said he had a lot to learn to get used to the speed of F1 cars and the greater complexity at the highest level of the sport.

"The biggest thing for me though, will be lining up on the grid with so many superstars of the sport – it's an absolute honour to be competing against some of the greatest drivers in the world."

What about the car and engine in the AT02?

All teams are limited on the amount of development they can do this year by regulations aimed at cost-saving in the pandemic.

Aerodynamic development is free but structural and mechanical changes are limited to two 'tokens', which Alpha Tauri technical director Jody Eggington said the team had spent on a new nose and a redesigned front suspension system.

The monocoque is carried over from last year and the team have decided to retain the rear suspension and gearbox used in 2020, which were Red Bull's in 2019.

New rules have also restricted aerodynamic performance, with restrictions on the bodywork at the rear of the car.

Eggington said he expected "a performance level similar to that seen mid-2020".

Engine partner Honda is leaving F1 at the end of the season, but the Japanese company has decided to bring forward a new power unit this year that had originally been planned for 2022.