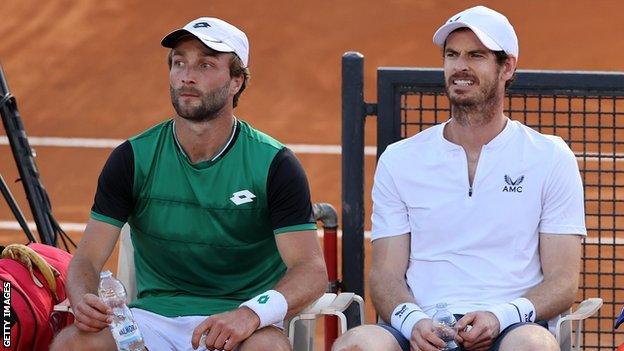 Andy Murray's expected singles return has been delayed after he turned down a wildcard for this week's Geneva Open.

No explanation has been provided, but the British former world number one made the decision after playing doubles with Liam Broady at the Italian Open.

Scot Murray, who turned 34 on Saturday, will have no further chances to prove his fitness before the French Open wildcards are announced this week.

The Geneva Open starts on Sunday and ends on 22 May.

French Open qualifying gets under way on 24 May and the main draw on 30 May.

Murray's doubles return at the Italian Open was his first match since March, after he pulled out of the Miami Open with a groin injury.

"I appreciate for them they would want to see me play matches," he said of French Open organisers on Wednesday.

"I've done all the training and physically I'm fit, but it is different playing matches and that's where I obviously need to prove myself.

"I'd love the opportunity to play there, but if not I'll go and compete in the qualifying and try and go that route. There'll be no hard feelings my way."

Salford's 'Mr Big': Paul Massey's rise in the criminal underworld through violence and extortionDive into 2010s nostalgia with our quiz: How much do you remember about music from the last decade?
Source