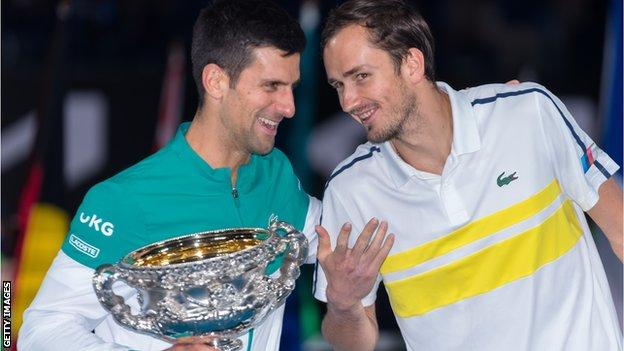 Andy Murray was not surprised Novak Djokovic won a ninth Australian Open, as the "younger guys have not shown they are particularly close".

British former world number one Murray said he watched virtually nothing of a tournament he was forced to miss after testing positive for Covid-19.

"I watched very little, I wanted to be there and it was a struggle," he said.

"I stopped following all the tennis players I follow on social media because I just really didn't want to see it."

The 33-year-old expected Medvedev to push Djokovic closer in the final, but knows only too well how hard it is to beat the world number one in a Grand Slam final.

"It's different standing to return or to serve in a Grand Slam final, than a quarter-final or a semi-final, when you are coming up against someone who's won 17 of them," he continued.

"It's pretty intimidating and the younger guys have not shown that they are particularly close. At the US Open, (Dominic) Thiem did what he had to do to win the event, but if Novak hadn't put a ball through the line judge's throat, it would have been the same outcome, I think."

Murray is competing at the South of France Open in Montpellier this week, in his first ATP Tour event for four months.

He began his season in Italy on the ATP Challenger Tour. He reached the final in Biella, but lost in straight sets to Ukraine's Illya Marchenko.

"I actually felt fine on the finals day, and then when the match started I felt very heavy-legged and I didn't deal with it well at all," he said.

That Peter Crouch Podcast: The boys are back and wondering when Peter was at 'peak Crouch'Evil Genius: Was Alfred Hitchcock a real life horror?
Source