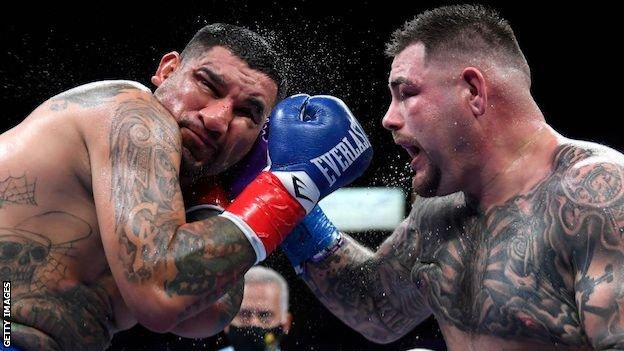 He had not fought since his December 2019 rematch defeat by Anthony Joshua, after which he lost 55lb.

Ruiz looked sharp with the jab in the first round at the Dignity Health Sports Park in Carson before American Arreola sent him to the canvas with a shot to the temple in the second.

Ruiz was hurt again in the third when 40-year-old Arreola landed a left hook, but looked more comfortable over the ensuing rounds.

He found his rhythm with the jab in the eighth round and twice forced Arreola to shake out his shoulder – the latter occasion in the 11th with a sharp right-left combo – before staving off Arreola's desperate attempts in the final round.

"I respect the judges, but today I always said beauty is in the eye of the beholder," Arreola said.

"Honestly, man, did he win? Fine. But don't tell me you're only going to give me two, three rounds."

Ruiz now holds a record of 34 wins from 36 fights, while Arreola has lost seven of his 48 contests.

'I killed the old Andy' – Ruiz on his 55lb weight loss

This Time with Alan Partridge is back: Stream his second series on iPlayer nowFancy cocktails to celebrate this bank holiday?: BBC Food has top tips for drinking outdoors