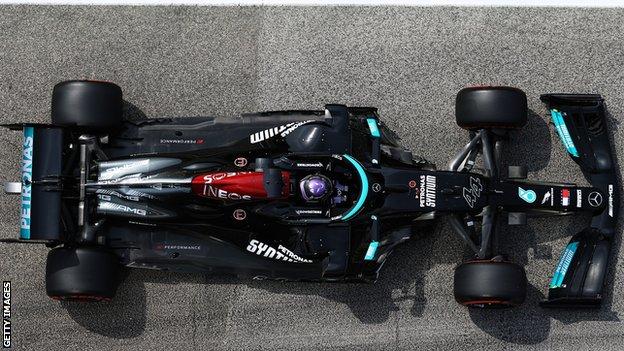 One of Lewis Hamilton's greatest drives stole victory from Max Verstappen and Red Bull at the first race of the season. Now a "special" lap, as the Mercedes driver put it, has deprived his team's rivals of pole position at the second.

That's one way of looking at it, anyway. Another is that Red Bull let victory at Bahrain slip after being out-foxed on strategy, and that Verstappen would be starting from pole at Imola had he not run wide on his final qualifying lap.

As it is, Sunday's Emilia Romagna Grand Prix is set up brilliantly, with Hamilton on pole, Verstappen's team-mate Sergio Perez in second and the Dutchman third. Hamilton and Verstappen start on the medium tyre, and Perez on the soft.

And whereas in Bahrain it was two Mercedes against one Red Bull at the front, which played an important role in the race outcome, this time it is the other way around, after Valtteri Bottas could manage only eighth on the grid.

Hamilton pulls it out again

Hamilton was both incredulous and psyched after sealing the 99th pole of his career, one he had not expected going into qualifying after lagging 0.557 seconds behind Verstappen in final practice.

"We had that gap to the Red Bulls in P3," he said. "I couldn't go 0.6secs faster. We just kept our heads down and worked on tweaking the car a little bit into qualifying."

On his first lap in the decisive final session of qualifying, Hamilton sneaked ahead of Verstappen by 0.091secs despite feeling he had lost a little time in Acque Minerali. On his second, he was 0.15secs down on his previous time by Turn Nine, but then quicker around the rest of the lap to end it just 0.022secs slower than his first.

Was this a qualifying to match some of his greatest against-the-odds poles, such as Singapore 2018, he was asked?

"We have not really hyped it up too much," he said, "but the fact is that in the last race there was a good gap to the Red Bulls.

"We did feel we could close it up a little bit this weekend but that was a really clean qualifying session.

"I guess it's about just time and time again adjusting in terms of my own performance. I'm really grateful I'm still making steps in the right direction.

"Yeah, it was a real surprise – no one in the team expected us to be on pole. But it really was the tidiest lap I could put together and a little bit more. Whether it was a Singapore lap or not; it's a different vibe. But it definitely was good." 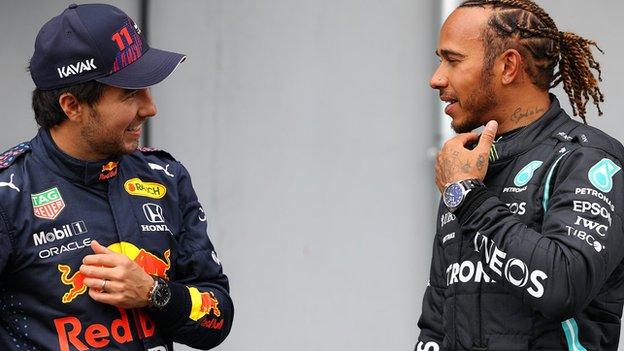 Verstappen knew pole had been there for the taking, but was phlegmatic and good humoured about losing out.

"It was all coming along nicely and then in Q3 the final run I didn't have a good lap," he said. "I went off in Turn Three with two wheels. I know Honda makes good lawnmowers but I don't think this is suited for that.

"It was a scrappy lap, the first for a while, but at least I tried. We are not robots. Sometimes it happens that we make a mistake.

"But we were very close and that was positive. We have two cars close to Lewis on different tyres and hopefully that gives some excitement tomorrow."

There is the possibility of rain. There will be opposing strategies. Can Red Bull avenge their defeat in Bahrain, or can Hamilton hang on in front and make them pay for their errors again? It will be one not to miss.

Undoubtedly the most disappointed man in the paddock after qualifying was McLaren driver Lando Norris.

The 21-year-old Briton had been flying and looked set to contend for a place on the first two rows. For a brief moment it looked as if he had delivered, his name popping up in second place as the final laps came in, with a time that would have put him third on the grid.

But he had run a fraction too wide in Piratella, gone beyond track limits, and it was deleted.

Instead, Norris will line up seventh, behind McLaren team-mate Daniel Ricciardo, whom he has been demonstrably quicker than all weekend.

As Norris put it, "rules are rules" and "without track limits racing would be awful – they are there for a good reason". But that was little consolation. 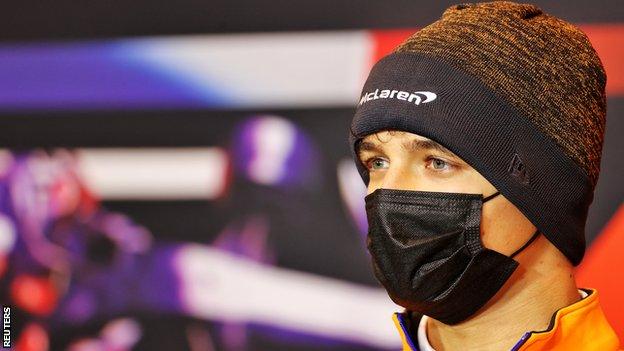 Norris wrote on Twitter after qualifying: 'Sorry to everyone at McLaren. You deserved better today.'

"Things were looking good and the car was pretty hooked up today but I let everyone down so I am a bit gutted," he said. "One little mistake and it all goes down the drain.

"I need to take it on the chin and look ahead to the race tomorrow."

Norris knows he faces a tough afternoon on a track on which overtaking is notoriously difficult.

"It's a qualifying track," he said. "Today was the day I didn't want to make any mistakes and I made a pretty big one. It wasn't very easy to overtake last year but hopefully I can try to make up the places we lost out today."

Off track, the conversation this weekend has been dominated by an unpleasant political argument with Aston Martin at its centre.

It is a complicated topic but the essence of it is that Mercedes and Aston Martin feel that their cars have been more adversely affected by rule changes introduced to slow the cars down this year than everybody else's. They are questioning the fairness of that process and want further changes to redress the balance.

"The right thing to do is to have the discussions with the FIA and find out exactly what happened and why and see if something can be done to make it more equitable," team principal Otmar Szafnauer said.

Mercedes F1 boss Toto Wolff has gone even further, implying that the rule makers may have deliberately chosen these specific changes to slow them down after such a dominant year in 2020.

"I understand the topic because how the rules have fallen into place last year one can always question what the motivation was," Wolff said.

"There is certainly the right to review and look at things and discuss them with the FIA to find out what has actually happened and how things have happened. That's why I respect Aston Martin's inquiry. Maybe things were targeted at us and they are collateral damage."

Needless to say, the other teams give their complaints short shrift. 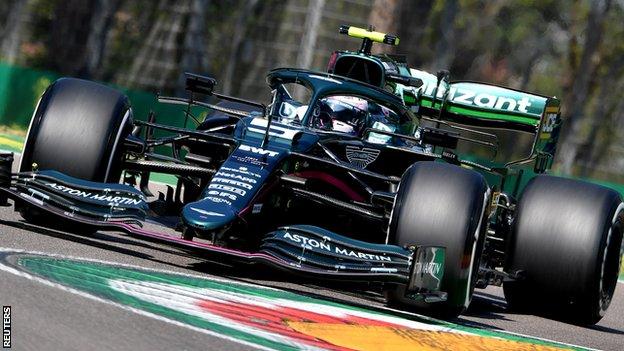 Vettel's start to life as an Aston Martin driver hasn't been great, with the four-time world champion finishing fifth in Bahrain and only qualifying in 13th place for Sunday's race at Imola

What is the row about?

The argument centres on design philosophy. Mercedes and Aston Martin differ from all the other teams in running a low rake – the angle of the car from front to rear. All the others, to varying degrees, run a high rake, the back of their cars further off the ground.

These two different design philosophies generate downforce in different ways at the rear of the car, where the rule changes have been focused.

Last year, as the pandemic laid waste the start of the season, and before it was clear how or whether races would be possible in 2020, it was decided on cost-saving grounds to delay extensive new rules planned for 2021 by a year, and force the teams to use their 2020 cars for one more year.

Tyre supplier Pirelli said, in that case, the cars would need to be slowed down because the tyres were already at their physical limit – as a number of failures last year demonstrated – and the inevitable increase in cornering speeds from year-to-year development would take them beyond it.

The changes to do that were introduced in two phases last year, in May and in August.

Aston Martin's complaint is that the second phase was demanded by the FIA on safety grounds on the basis that the tyres were staying the same this year – only for Pirelli to decide to introduce a new, more robust tyre anyway. And they say they warned that the tweaks to the rear of the cars would adversely affect them and Mercedes compared to the other teams.

Aston Martin have pointed to their performance at the first race of the season as evidence that they were right. They point out that, last year, they had the third fastest car in Bahrain, and that this year it was the seventh.

Rivals countered that it was only one data set – and that no one knows for sure whether one car-design approach was more badly affected than another because the teams are working in isolation and are not able to compare directly how the rules affected each other's cars. Teams with low-rake cars don't have a high-rake car to compare with – and vice versa.

Ferrari team boss Mattia Binotto said: "The regs are the same for everybody and the same challenge for everybody. I don't think you can clearly say one concept is better or worse. It is up to us to challenge the design and make sure we are performing at the best whatever the regulations."

Not only that, but Aston Martin's fastest driver last year – Sergio Perez – has left, and his replacement Sebastian Vettel is so far struggling, so there is an immediate loss there.

In terms of statistics, Imola has muddied the picture. At a different circuit, in different conditions, comparing the speed of this year's cars to their predecessors at the same track in 2020, Aston Martin are actually fourth best of the 10 teams. But Mercedes, despite Hamilton's pole, have lost more pace than anyone.

Red Bull team boss Christian Horner said it was "naive" to think the rules would be changed mid-season. In any case, that is highly unlikely to happen because it would need nearly all the teams to agree, and they clearly won't.

Still, Aston Martin bosses – including team owner Lawrence Stroll – met the FIA for talks on Saturday evening in Imola. The process is likely to rumble on for a while yet.