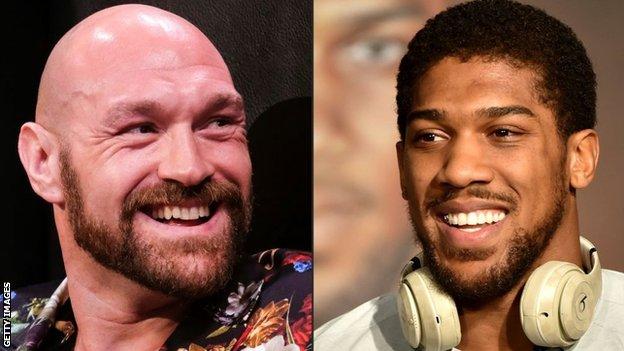 Tyson Fury's promoter Frank Warren is "not happy" that Eddie Hearn leaked news on the world title unification clash with Anthony Joshua but says "everybody is on the same page".

Warren says "everybody signed an agreement" that only joint announcements would be made.

"That came out of the blue," he told Talksport.external-link "But it is out there now."

He added: "There is nothing we can do about that. We are all not happy."

Fight Talk: Anthony Joshua v Tyson Fury is 'signed,' but can we get excited yet?

This would be the first time that all four belts are contested in a heavyweight bout.

The location and date for their first clash is yet to be confirmed.

"We've still got a way to go," Warren added. "But everybody is on the same page to make this work.

"We are all collectively working to get a venue sorted now."

Analysis – 'I don't think this fight needs a four-month sell'

We're now down to the date and venue. Those are still hurdles and Covid is still a factor. But among the few certainties that have been released is that this fight will not happen behind closed doors.

The Middle East is what most people believe to be the favourite for a likely venue. Saudi Arabia had single figures for deaths [from Covid] every day of last week.

I am getting excited but I'll start doing my cartwheels when we get a date and a venue.

I think we're running out of time for it to be in May. For a fight of this magnitude, they'll want a long lead-in to build up those pay-per-view figures, if they're not getting the money on the gate.

Some of the great fights in the 80s, they had a five-month build, a 22-city tour. We're in a different world now, where you can reach so many more people so much quicker and easier.

These guys might just have one press conference in London or the Middle East then get straight down to business.

The site fee [paid by the host venue] will guarantee that everything that's lost on the gate is made up, and the pay-per-view, I don't think we need a four-month sell anymore.

These guys have [already] had a build-up, they've been snapping at each other for years.