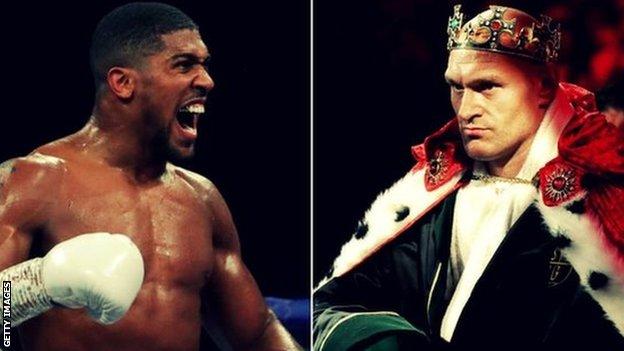 Joshua holds the WBA, WBO and IBF heavyweight titles, while Fury has the WBC belt

Anthony Joshua says Wembley Stadium would be the "ideal" venue when he faces fellow British champion Tyson Fury in their world heavyweight clash.

A two-fight deal between the pair was signed last month but the venue and date has not yet been announced.

Joshua said finding the right venue in a global pandemic had caused the delay.

"We want to have people coming to the venue. It's just finding the right location. For me, Wembley would be ideal," he said.

Joshua, 31, beat Wladimir Klitschko at Wembley in 2017 and Alexander Povetkin there the following year.

The fighters' representatives are understood to be looking at several offers to host the fight, with Saudi Arabia considered a front-runner.

Earlier this week, Joshua's promoter Eddie Hearn told iFL TVexternal-link: "We have had an offer that we are all happy with.

"We have an offer that both fighters, both teams, accept. We are now closing that contract with that site."

Joshua's IBF, WBO and WBA titles and Fury's WBC belt will all be on the line in the first contest for all four major belts at heavyweight.

Fury, 32, said this week the fight will "100% happen" and Joshua has echoed that. He told ITV's The Jonathan Ross Show, in an interview to be shown on Saturday: "He wants the fight, no doubt about it.

"So do I, and more than me and him, the whole public want it. I put my crystal ball out there and I say it's going to happen this year, 100%. End of July, early August."