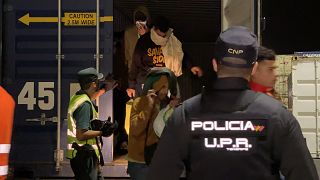 The port of Tenerife, in the Canary Islands, is a major hub for tourism. It’s also host to a different kind of traveller.

Every night, police and security teams are on the lookout for migrants trying to hide in trucks that are ready to board cargo ships headed for the continent.

Juan Ignacio Llaño is the Fleet Director for Fred Olsen Express. He is one of the people who often finds these stowaways. He tells us that his team tries to “guarantee the security of all those concerned, above all the migrants”. He stresses that their desired destination is mainland Europe and “they will do anything to leave the islands, even it is at the cost of their own lives”.

Dozens of men are found every night in shipping containers at the port. A few of them will make it. The others will try again another day in the near future.

Most of those that don’t make it are sent back to the heights of Tenerife island to the archipelago’s biggest reception centre for migrants, Las Raices. 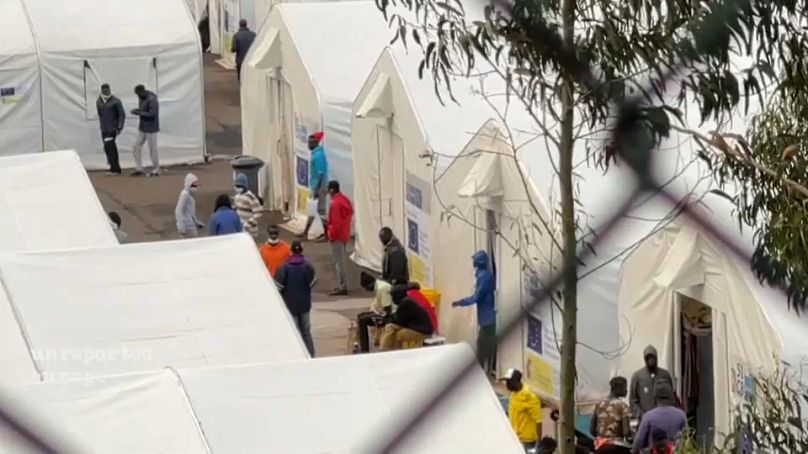 The media is not allowed inside the centre, but the atmosphere is gloomy there. A makeshift camp has been set up right in front of the gates.

Robert Mesa says it’s a symbol. He’s part of a group of residents who come to give a helping hand to those he says have nothing. He tells us that the migrants “wanted to protest about how bad the conditions are inside and also about them being in the Canary Islands for months without anyone telling them a thing about what will happen”. He points out that many of them have passports and have applied for asylum. Some even have invitation letters from family members who can host them in various european countries. Despite all that, they are still not allowed to travel.

More than 20 000 people making the dangerous Atlantic crossing from Africa’s northern western coast landed in the Canary Islands last year. Many were dispatched to hotels in Gran Canaria, the main island, as reception centres were overwhelmed. Due to the COVID-19 pandemic, the hotels had plenty of room for the migrants.

However, the tourist resorts have now emptied, as thousands were either repatriated or made it to the European continent. Those that weren’t so lucky as to reach the mainland, have been stranded by the lockdown.

Calvin and Unntove run several hotels and restaurants on the island. They hosted hundreds of migrants at the peak of the crisis. They have decided to keep their doors open to dozens of them.

Ousmane is one of their protégés. He arrived from Senegal seven months ago. His dream is to give his family a better future. His wife and baby girl are in Senegal. He has never met his daughter before because when she was born he was already in Gran Canaria. “They’re why I’m doing everything to succeed”, he says. 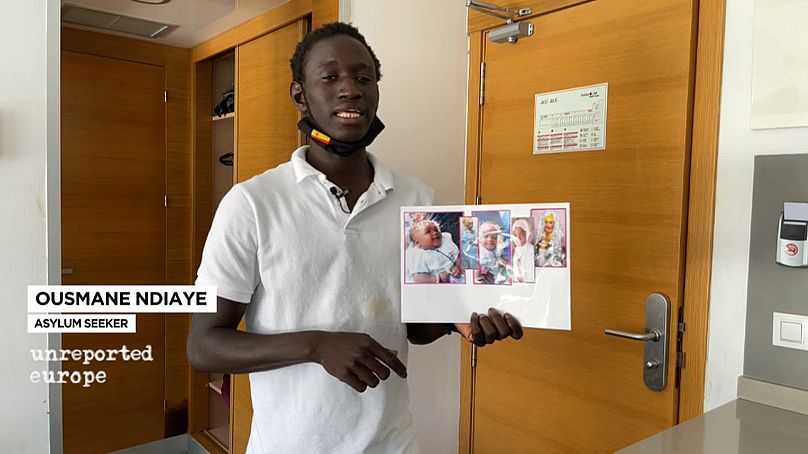 Ousmane never misses any of the language courses provided in one of the hotels run by Calvin Lucock.

The 19 year old is patiently waiting for a reply to his asylum request. Like most of his companions at the hotel, he dreams of moving to the continent. He calls for Europeans to help the migrants on the Canary Islands get to the Spanish mainland. “I have faith that sooner or later I will earn my future”, he adds.

I will never be discouraged

In order to help the young men build a future, the couple that took them under their wing, has recently launched a foundation, Canaria Mama Africa. “Mama Africa” is also what the guests call Unntove, the woman they consider their second mother. “They have so much hope coming to Europe” she tells us, “I really hope that we can contribute to be a part of a journey for them that that hope will be fulfilled, instead of broken”.

To Calvin, there are only two ways to address the challenge of so-called illegal immigration. Though expulsion is one option, he believes integration is a key way to resolve the migrants’ woes. But either way, things need to speed up he says. And insists that “doing nothing isn’t a solution because then you just end up with people living on the street, and that becomes a different challenge”. 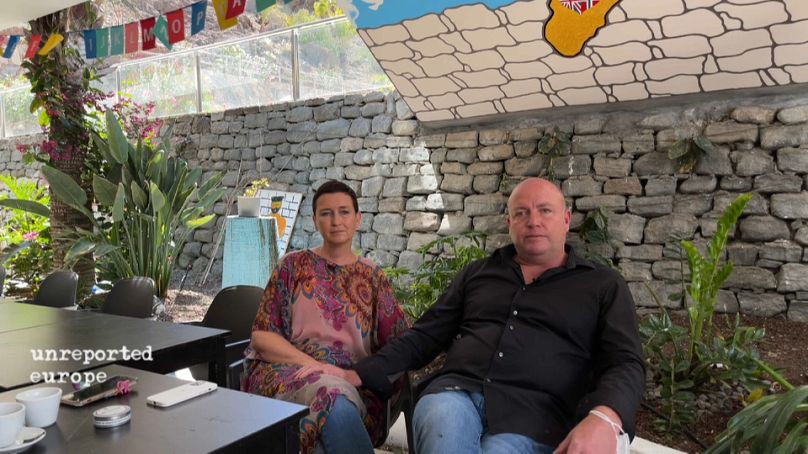 For some of the local population, it’s one challenge too many.

Alex is a member of the Spanish far-right party, Vox. He receives regular complaints from residents who say their lives are disrupted by the presence of the uninvited travellers.

He takes us to a residential area where he says people are now afraid to walk out of their homes, since several reception centres were opened there. One of them is a former convent, bordering the house of a resident who wished to remain anonymous, due to fear of reprisals. From her patio, she has a direct view on the windows of the convent. She says that “there are always problems” with the migrants, as there are often conflicts. She does not feel safe. “Every time you leave your house, they can catch you, they can rob you, they can rape you, and so on and we’re not used to living like this”, she adds.

Tensions reached a peak a few months ago when violence between residents and migrants erupted near a former school that’s now a reception centre, in one of the neighbourhoods of the capital Las Palmas. Things have since cooled down.

For Alex though, stronger steps must be taken by both the Spanish State and the European Union to avoid such situations:

“The first thing they have to demand is for people trafficking to stop, and for motherships to be removed. Secondly, using us as a front to stop immigrants getting to Europe, so that they all stay in the Canary Islands, is not the solution. This only results in a huge waste of public funds which costs the taxpayers, when people here don’t have work”.

For the Spanish government’s representative in the Canary Islands, Anselmo Pestana Padrón, the European pact on migration and asylum is yet to be implemented. Based on solidarity and responsibility, the pact that was proposed in September 2020 aims to create more efficient and fair migration processes whilst reducing unsafe and irregular routes. 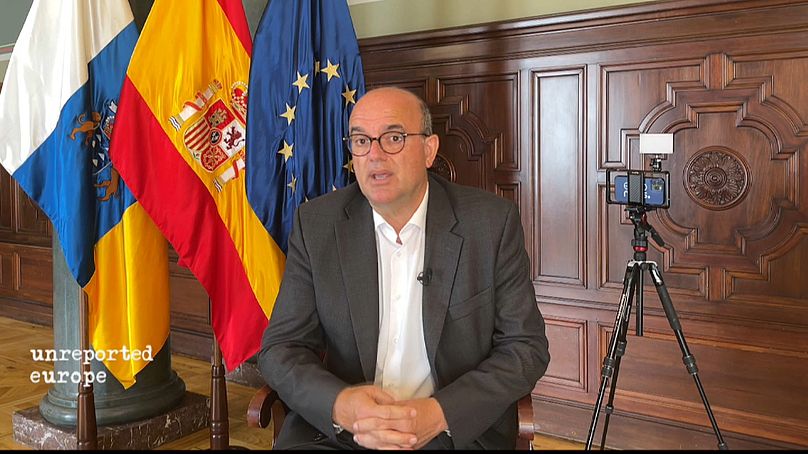 The Spanish government’s delegate to the Canary IslandsAnselmo Pestana Padrón

To Anselmo, “Europe can’t just look at territories, which are borders, as if migration was their problem. It’s Europe’s problem. And if there’s a territory that is overwhelmed, and where migration generates a social problem, given that there’s an economic crisis also in the Canary Islands, Europe has to show solidarity”.

For fear of being repatriated, many migrants have left the reception centres, and live in the streets of Las Palmas.

At sunset, dozens of men come out of the shadows to line up for food handed out by Somos Red, a network of local residents who try to help them as best they can. But this has its limits says Roberto Gil, one of the volunteers. The islands’ economy has been hard hit by the sanitary crisis, and “the citizens don’t have the resources to distribute food and clothes, we are saturated”, he stresses. Still, “we can’t let people live, sleep, and eat in the streets!” he exclaims, concluding that this situation is “a time bomb” that “will explode”.

As the night falls, groups of men prepare to huddle into the small tents they set up on the beach for the night. They will be dislodged by the police at dawn. 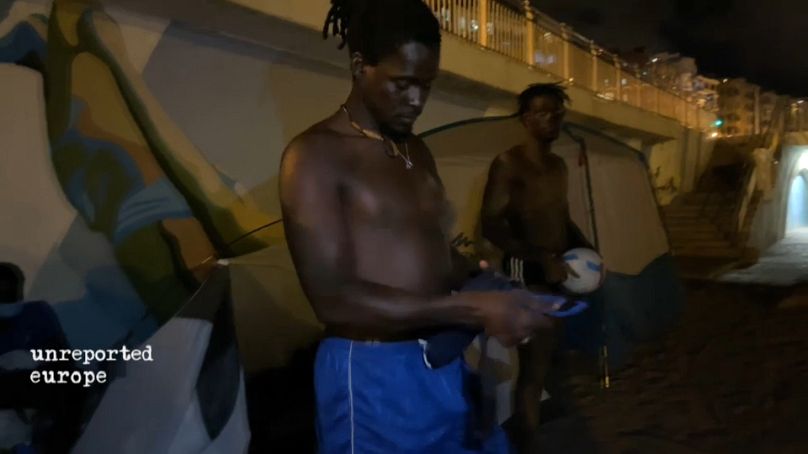 Doua sleeps rough on the beach in Las Palmascleared

Doua is one of the men sleeping rough there. He tried to leave the island four times with all the legal documents required to do so. He shows us his passport, several plane and boat tickets, as well as an international protection form. But he was turned back at each attempt. He would have stayed in Senegal, he says, if there was work, but there isn’t any. He leaves us with a message that is shared by all the other migrants we met:

“Help us to leave this island, please”.