From Tottenham's perspective, Sunday's north London derby was a day when everything bad that could have happened, did.

After the way things had been progressing for Jose Mourinho's side in recent weeks, what I saw from them in their 2-1 defeat at Emirates Stadium felt like a massive backward step in a number of ways.

Spurs had gone into the game on the back of three successive Premier League wins and a couple of convincing victories in Europe, scoring lots of goals and taking a few of those teams apart.

It was all looking good. They have got the Carabao Cup final to look forward to, they have got one foot in the quarter-finals of the Europa League and they are in touching distance of the top four. Potentially, with the way they had started playing, I had thought this season could be unbelievable.

Then, one performance later, I am left thinking that, no, it was all a lie.

It feels like all of my optimism was completely misplaced because it came after they had played three minnows, basically, in Burnley, Fulham and Crystal Palace. The minute they have come up against anyone decent, they have reverted to type.

That means sitting deep and being cautious, which again got Spurs nowhere on Sunday. And what we saw against Arsenal is what is going to happen every time unless Mourinho gets them back playing on the front foot. 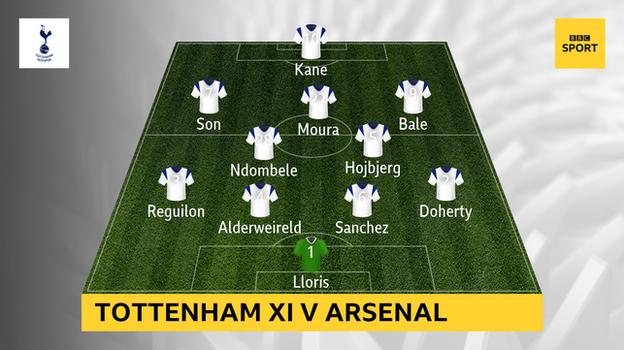 Erik Lamela replaced Son Heung-min, who went off after 19 minutes with what appeared to be a hamstring injury

It was an all-round shocker of a display from Tottenham against Arsenal but, first and foremost, their mindset for the game was absolutely awful.

Going into any derby with the type of mentality I saw from the whole Spurs team in the first half is asking for trouble. They were there to be beaten, as simple as that.

I don't see the point in putting Harry Kane, Gareth Bale, Son Heung-min and Lucas Moura on the pitch if you are just going to sit off the opposition and let them have control of the game like they did.

The one thing you always try to do in these situations is let the other team know who is boss. The last thing you want to do is let them build their confidence, but Spurs did exactly that.

Early on, Arsenal were playing one, two then three passes and you could see them thinking 'yeah, this is feeling good'. No-one stopped them.

I could sit here and say that Bale and Matt Doherty down Tottenham's right side were weak – and, yes, that's where Arsenal got a lot of joy going forward. 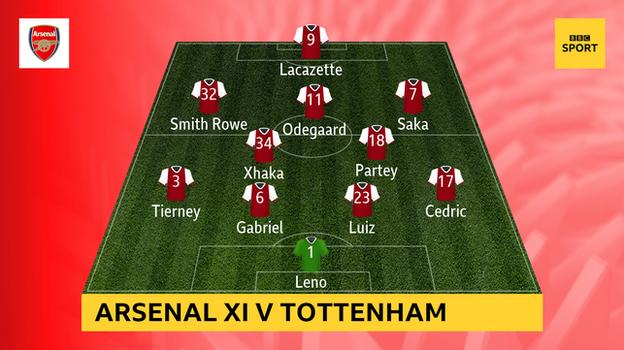 But Bale is not on the pitch to defend, he is there to go forward and make things happen and that is another thing that I thought was missing massively in the first half.

Once Son went off injured after 19 minutes there were no forward runners behind the Arsenal defence anymore. There was no attempt to hurt them whatsoever.

'Hojbjerg was nowhere to be seen' 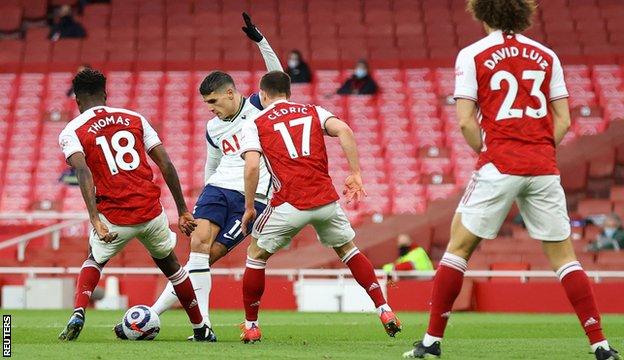 Lamela puts Tottenham ahead in the 33rd minute. Before that move, which saw Lucas Moura help Sergio Reguilon's cross into Lamela's path, they had not managed a touch in the Gunners area

The one highlight for Spurs was Lamela's incredible 'rabona' goal. It was just stunning, and it got me up and out of my seat even though my legs are in agony after I've hiked 100km for Comic Relief this week.

But it came out of nowhere and they were not able to build on it. Sometimes when you take the lead against the run of play like that you can kind of say to each other "right, we need to sort it out now", but that just didn't happen. 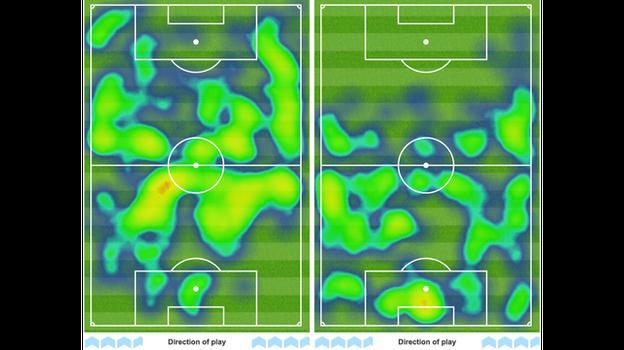 Arsenal's equaliser was a terrible goal to concede – the defending from Doherty was too weak and Kieran Tierney went past him too easily. Then, from his cutback, Martin Odegaard was unmarked – it was all a little bit schoolboy.

It was the same right through the Spurs team. They didn't look convincing in anything they did and they did not have any authority at all, anywhere on the pitch. I don't know what's happened to Pierre-Emile Hojbjerg recently. He started the season absolutely on fire, but I think it has gone under the radar how poor he has been in the past few weeks.

Kane was also extremely quiet, until Lamela was sent off. Then he decided to come to life, but I don't really understand why it took the red card for Spurs to start attacking. It felt a bit like they were thinking "we are losing and down to 10 men, let's throw caution to the wind".

No, don't wait. You have got good players, so go and play forward in the first place. When you have got that mentality to go and take risks, like Arsenal did, then you get the rewards.

Referee made a wrong decision – Mourinho

Don't get me wrong, the big decisions went against Spurs on Sunday – I don't think it was a penalty for Arsenal's winner and Lamela was unlucky to get two yellow cards.

But that is not where the game was won and lost – Arsenal were much the better side and they ended up winners because they approached the game in a really positive way, they were brave on the ball and they showed their quality.

In contrast, Tottenham's approach stank of a Mourinho who was more concerned with Arsenal than his own team, and showing what Spurs could do. He didn't set them up to win that game, he set them up worried about what the opposition can do to them.

To add a bit of salt to the wound, Spurs have lost Son for what could be the best part of six weeks with his hamstring injury – and they have potentially lost some of Bale's allegiance to the cause too.

If I were Bale, I would be annoyed at being dragged off before the hour mark of a north London derby, because I would be looking around thinking I've been no worse than anyone else here.

Mourinho might just have sent that relationship back to ground zero as well.