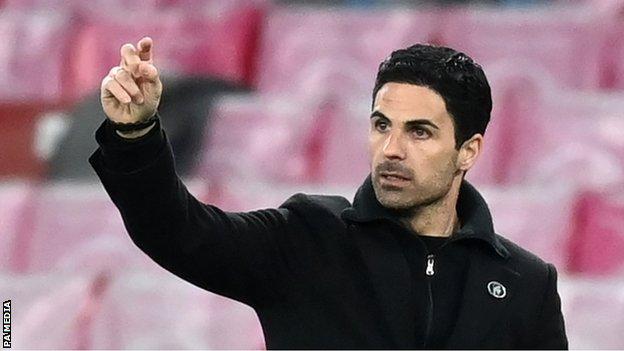 Arsenal manager Mikel Arteta says club owners Stan Kroenke and Josh Kroenke "are going to do everything" to achieve success at the club.

Protests against the owners took place amid Arsenal joining the European Super League [ESL] and then pulling out.

Spotify founder Daniel Ek said he would like to buy the club but the Kroenkes have insisted they "are not selling".

"If they [the fans] get the opportunity to know them, I think most of them would be surprised," said Arteta.

"And if th at is the case, I think that will benefit everybody at the football club.

"It will benefit the fans and bring a lot of clarity. If there is a way to do that and it is going to be helpful, let's do it, if that is what is necessary."

Arsenal legends Thierry Henry, Dennis Bergkamp and Patrick Vieira joined billionaire Ek's bid to buy the club prior to the Kroenkes saying they "will not entertain any offer".

"A lot of talks and a lot of speculation has been surrounding the situation the last week or so," said Arteta, speaking before his side's Europa League semi-final, first leg against Villarreal on Thursday.

"Our fans raised their voices during the match against Everton, but now we have a clear and committed statement from the ownership, so I think that is gone when they said what they did.

"I cannot control the speculation and what is going on, what I like to know and talk about is the reality and the reality is that we have owners who are really, really committed and want a successful team on the pitch and are going to do everything they can to achieve that."

American Stan Kroenke, 73, is owner of numerous sports franchises, including NFL side the Los Angeles Rams and NBA team the Denver Nuggets.

Kroenke then assumed full control of the club after Alisher Usmanov accepted his 2018 bid to buy him out for £550m.

Kroenke's son, Josh, is a director at the club and heavily involved in its day-to-day operations.