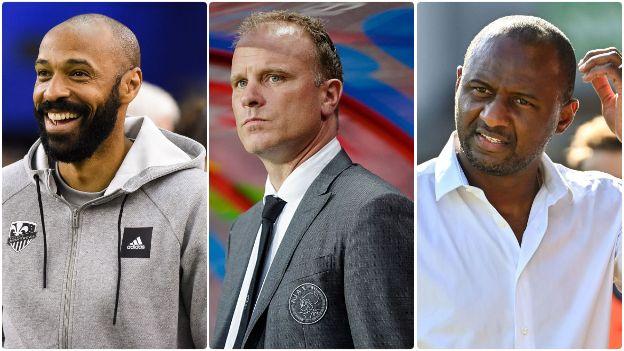 Owner Stan Kroenke has no intention to sell, but more than 1,000 fans protested outside Emirates Stadium on Friday calling for him to quit.

Arsenal had announced they were one of 12 founding members of the European Super League the previous Sunday.

But just 48 hours later, they withdrew and apologised to fans.

On Friday, Swedish businessman Ek, 38, who is worth a reportedexternal-link 4.7 billion US dollars (£3.38bn) tweeted: "As a kid growing up, I've cheered for Arsenal as long as I can remember. If KSE would like to sell Arsenal I'd be happy to throw my hat in the ring."

Arsenal apologised in an open letter to their fans following their withdrawal from the European Super League and said they had "made a mistake", adding that they were withdrawing after listening to supporters and the "wider football community".

The Gunners board said they did not intend to "cause such distress" and that they joined the Super League because they "did not want to be left behind" and wanted to ensure the club's future.

Arsenal manager Mikel Arteta says Kroenke has apologised to him.

A 73-year-old American owner of numerous sports franchises, including NFL side the Los Angeles Rams and NBA team the Denver Nuggets.

Kroenke took a 9.9% stake in Arsenal in 2007 and slowly built up his shareholding until it reached 62.89% in April 2011. He was subsequently involved in a power battle with Alisher Usmanov but emerged successful and now owns the entire club.

Vinai Venkatesham is Arsenal's chief executive but Josh Kroenke is a director and heavily involved in the club's day-to-day operations.