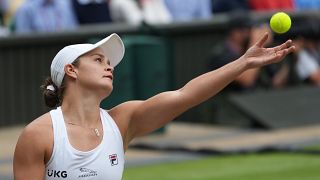 She is the first Australian to win Wimbledon since 1980 and the fourth player to win the junior-main draw double at the All England Lawn Tennis Club.

In tribute to Evonne Goolagong Cawley, Barty played in an outfit very much inspired by the dress worn by her compatriot in 1971.

She was at her best at the beginning of each set against the eighth-seeded Pliskova, a 29-year-old from the Czech Republic with a big serve.

Barty’s most significant wobble came late in the second set. She served for the victory ahead 6-5 but sailed consecutive forehands long to get broken, then was shaky in the ensuing tiebreaker, which she ceded with a double-fault.

In the third, though, Barty went up an early break, led 3-0 and stayed the course in the first Wimbledon women’s final to go three sets since 2012. It also was the first since 1977 between two participants who never had been that far at the All England Club.

Neither Barty nor Pliskova made it past the fourth round at the grass-court major until this fortnight.