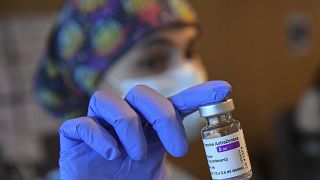 AstraZeneca has said that half of a 29-million-dose “vaccine stockpile” at an Italian factory is being sent to European Union nations during the last week of March, while the other half will be sent to low-income countries via the COVAX scheme.

The Anglo-Swedish firm, which has been at the centre of a row between the EU and the UK over vaccine supplies, criticised “inaccurate statements” in the media on Wednesday that described the vaccine doses as a “stockpile”.

It said that 13 million of the doses that were discovered during a European Commission investigation of the Anagni plant in Italy on the weekend will be distributed via COVAX, were manufactured outside the EU and are in Italy in order to be processed into vials for transport.

A further 16 million doses are awaiting quality control review, a spokesperson told Euronews, before being dispatched to Europe. At least 10 million of those doses will be sent in the last week of March, with the other six million sent in April.

“It is incorrect to describe this as a stockpile. The process of manufacturing vaccines is very complex and time-consuming. In particular, vaccine doses must wait for quality control clearance after the filling of vials is completed,” the spokesperson said.

‘EU won’t be the fall guys’ when it comes to vaccines, says FranceAstraZeneca jab effective and doesn’t increase the risk of blood clots, US study findsUS watchdog says AstraZeneca may have used outdated info in vaccine trial

AstraZeneca has been embroiled in a row between Brussels and London, with the EU angered that Britain has received some 10 million doses from EU plants while they say nothing came back from Britain.

The EU is now insisting on reciprocity as it sees vaccination rates in Britain racing upwards, while the bloc proceeds at a crawl.

With regards to AstraZeneca, the European Union’s chief executive warned last week that the EU would not hesitate to take action against third-party nations.

“This export modification of [the] export authorisation system does not constitute an export ban,” Dombrovskis said.

“The EU will continue to export vaccines. We are introducing some additional criteria to ensure that the EU is not falling behind in its own vaccination rollout as a result of these massive exports,” he said.