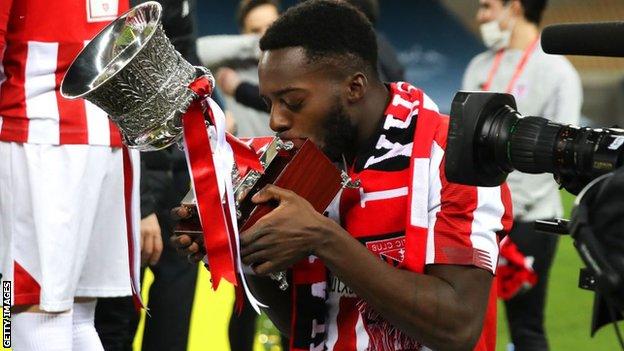 Inaki Williams recalls the days he would watch youngsters training at Athletic Bilbao's famed Lezama academy and dream of representing the club he loved.

Now the forward, whose own chance at Lezama arrived when he was 18, has the opportunity to help his boyhood team win the Copa del Rey twice in as many weeks.

"For anybody born in Bilbao or the surrounding areas, the main dream that children have is to end up playing for Athletic Bilbao," says the 26-year-old.

"I have been very fortunate because this dream has come true. Now I have the possibility of winning two titles, of making Athletic Bilbao become a champion."

The club's last success in the competition came in 1984 as part of a domestic double but they can end that 37-year wait on Saturday against Basque neighbours Real Sociedad.

That will be the 2019-20 final, which was delayed by 12 months because of the coronavirus pandemic in the hope fans would be allowed to attend, though it will now go ahead in Seville without supporters.

Athletic will then take on Barcelona on 17 April in this season's final, having already beaten the Catalan giants to win the Supercopa in January.

Underpinning all that Athletic Bilbao do is a philosophy that dates back more than 100 years and one that sees them field only players who have come through the academies of Basque Country clubs.

It may limit their available talent pool but Athletic are one of only three clubs, alongside Barcelona and Real Madrid, never to have been relegated from Spain's top flight and have won eight La Liga titles in that time.

Following Marcelino's appointment as manager in January, Athletic beat both those sides to win the Supercopa and, despite not being Basque himself, the head coach believes the club's methods remain sustainable.

"Is it incompatible with the 21st century? I would say absolutely not, because the principles are way ahead of different situations," he says.

"When you really trust and believe in a principle it is very authentic, and the philosophy and even the way of living and way of behaving is very strong. It is very responsible, respectable and even very viable. I think it is fantastic."

They rarely venture into the transfer market and the arrival of Pamplona-born winger Alex Berenguer from Napoli in October was the club's first signing in 20 months.

Athletic have instead invested heavily in their academy, as well as building a new 53,000-seat San Mames stadium in 2013.

Finding and nurturing talent is key and the club boast a comprehensive scouting network that includes agreements with around 160 local sides.

"We try to assist them as much as we possibly can with our coaches and the people specialised to deliver training courses or workshops," explains Alkorta. "What we are trying to build with this is that children from a very young age only want to play with us.

"There are lots of people supporting us in this endeavour because they will go to schools on a daily basis, they will watch children play, they go to all the towns and villages in our environment to spot talent – it is work that takes a lot of hours and lots of reporting." 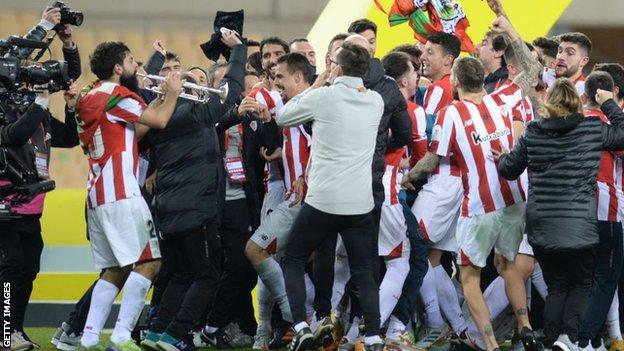 One challenge the club faces is fending off interest in their top players – but winning trophies helps.

"Loyalty is one of the main elements of our work and efforts, so that children from a very early age can understand that the main goal is to reach the top team," says Alkorta.

"They must also understand this is where they will have the most possibilities of reaching the first division in Spain and is something all of us work on on a daily basis, by giving lots of presentations, providing lots of development for the coaches."

Alkorta, the former Spain defender who played for Athletic Bilbao and Real Madrid, adds: "Trophies are important for us to believe in what we are doing and for children to see with this approach you can win trophies and can beat Barcelona and Real Madrid.

"This from our point of view – trophies, finals, playing in Europe from time to time – does give us support and make us feel enthusiastic that we can all carry on believing in our philosophy."

Belonging to the Athletic family 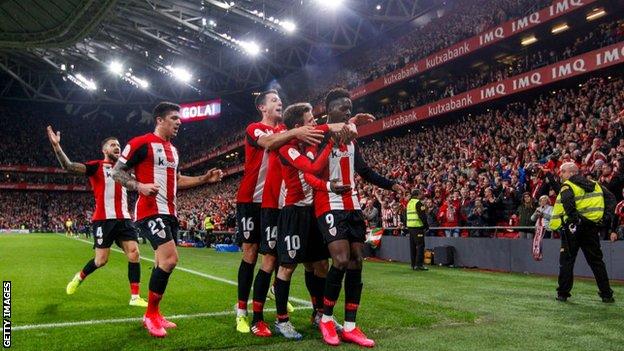 Athletic Bilbao celebrate in the Copa del Rey at their San Mames stadium, before the coronavirus pandemic meant fans were no longer allowed in

Williams grew up dreaming of playing in 'The Cathedral', the club's original San Mames stadium, having been born in Bilbao shortly after his parents arrived from Ghana.

The forward, on a club-record run of 185 consecutive games in La Liga, has spoken about spending his whole career with Athletic and is proud to see the city decked in red and white in the build-up to their upcoming finals.

"Marcelino was deeply impressed by the fact we are not only a team but a family too," says Williams, whose 18-year-old brother, Nico, is also at the club.

"We try to avoid any problems on the pitch or training rooms. They are friends more than colleagues.

"It is something you are taught from a very young age and it makes us feel very excited to wear the badge of Athletic Bilbao on your shirt."

Marcelino, who won the Copa del Rey in 2019 with Valencia, feels that sense of unity makes his side dangerous, though he would like to improve on their position of ninth in La Liga.

"We are talking about a unique changing room where people are united, all of them are working hard and all of them form part of the organisation," says Marcelino.

"Many of them have known each other since they were children, they have progressed over the years and their relatives know each other, because they went through different teams at Lezama, the academy.

"All of the players have that feeling of belonging, that they belong to the club where they arrived many years ago and now they are enjoying the dreams they had as children."

Dragon's Den returns: A new series of eager entrepreneurs hoping to strike the deal of a lifetimeYour film night sorted: Epic films for you to choose from this Easter weekend
Source