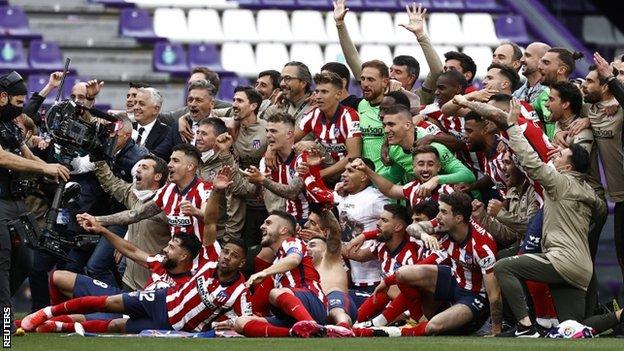 Luis Suarez said he was grateful to Atletico Madrid for "trusting in me" as his winning goal helped them edge city rivals Real Madrid to the La Liga title in dramatic fashion.

Diego Simeone's men trailed to Oscar Plano's strike for Real Valladolid but they turned the match around in the second half through an Angel Correa goal and Suarez's coolly taken effort.

Although Real scored twice late on to beat Villarreal 2-1, they came up short as they needed Atletico to drop points.

Uruguay striker Suarez started the season being told by Barca boss Ronald Koeman he was not in his plans for this season but went on to score 21 league goals – including the decisive one.

Relive the action from the final day in La Liga

A tearful Suarez said afterwards: "I am delighted the way Atletico have appreciated me and given me the chance to keep showing I can perform on this stage. I thank them for trusting in me. A lot of people have suffered with me, my wife, my children.

"I have been playing football for many years and this is the year my family and I have suffered the most. It is an amazing feeling to have performed on the final day of the season."

Atletico clinched their first title in seven years – and 11th overall – by finishing two points ahead of defending champions Real, who end the season without a trophy.

Barcelona – playing without skipper Lionel Messi, who was resting before the summer's Copa America – won 1-0 at Eibar through Antoine Griezmann's acrobatic strike and clinched third place ahead of Sevilla.

Julen Lopetegui's side play their final league game on Sunday against Al aves but will finish fourth even with a victory because of an inferior head-to-head record against Barca.

'Atletico is a huge club' 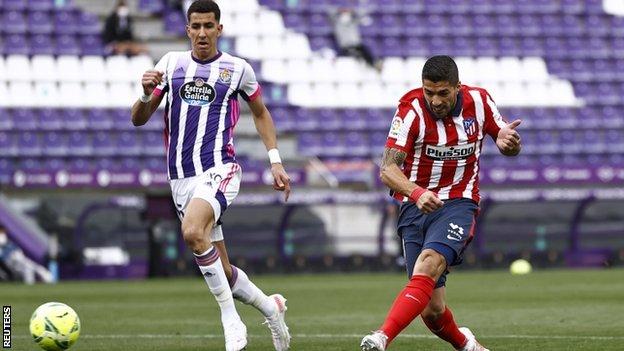 The title race was set up for a thrilling conclusion and it did not disappoint.

Injured Real skipper Sergio Ramos celebrated in the stands as news filtered through of Atletico falling behind, but the Spain defender was subdued just two minutes later when Yeremi Pino flicked in a goal for Europa League finalists Villarreal against the defending champions.

With both Madrid sides behind at the break, Simeone and Zidane needed to give inspiring team talks.

In the second half, Karim Benzema thought he had equalised for Real when he powered in a header but while VAR checked the goal – and ruled it out – Atletico levelled through Correa's smart finish to put them on the verge of glory.

Benzema, who has earned a recall to the France squad for the summer's European Championship, dragged wide from a promising position and seconds later Suarez ran clear and converted calmly to put Atletico 2-1 up.

Simeone said: "The world is going through a different phase right now so if we can give some joy to people it means so much to us. Thirty-two players I think have been involved, every one as important as the other. I am extremely grateful."

Suarez added: "My work is to help the team and pay them back by scoring goals. Sometimes it is necessary to push even harder but Atletico is a huge club and we have shown it this season – we have been the most regular performer and that is why we are the champions now."

Although Benzema curled in an equaliser on 87 minutes and Modric scored an injury-time winner for Real, it was not enough as Atletico players celebrated on the pitch with some travelling fans gathered outside the stadium in Valladolid.

Reportsexternal-link last week said Zidane has told the Real players he will leave at the end of the season but the Frenchman said he will discuss his future with the club.

"Right now, we need to be relaxed and then when things have calmed down in the next few days I'll talk to the club, and that's that, but today's not the day," said Zidane.

"Soon we'll see what happens, not only with me but with everything the club is planning for next season. You (the media) have said it already – we didn't win anything this year and we know what we have to do at this club." 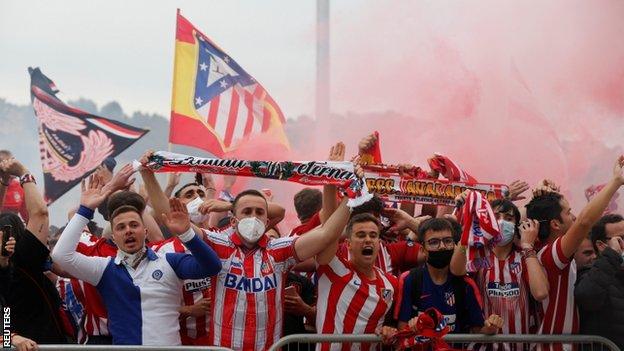 No stopping Suarez – the stats

Atletico are champions of Spain for the 11th time. Only Real Madrid (34) and Barcelona (26) have claimed more La Liga titles.Diego Simeone joins fellow Argentine Helenio Herrera (4) and Uruguayan Enrique Fernandez (3) as the non-European managers to win La Liga on multiple occasions.Luis Suarez has reached 20+ La Liga goals for the fifth time in his seven La Liga campaigns (16 in both 2014-15 and 2019-20).Suarez joins David Villa and Arda Turan in winning the La Liga title at both Atletico and Barcelona.Line-upsMatch StatsLive Text