'The best manager in the world?' Why Simeone and Atletico are the perfect fit

Tuesday's Champions League last-16 first-leg encounter will be the sixth time Diego Simeone has managed an Atletico Madrid side against Chelsea.

During his nine years at the club, the longest of any Atletico boss, Chelsea have appointed eight different managers.

And while Los Colchoneros are now thriving again, sitting top of La Liga even after Saturday's shock defeat by Levante, it was just 12 months ago that Simeone was being whistled by large swathes of the Wanda Metropolitano crowd, as Atleti limped to a 0-0 draw and were outplayed by 19th placed Leganes,

Renowned for building a team with grit and resilience, Simeone has revitalised Atleti with a new era of open, attacking football built around tactical tweaks and player role transformations, rather than a classic modern-day transfer window splurge.

In fact, many of Simeone's chief lieutenants sought pastures new with the departures of Antoine Griezmann, Lucas Hernandez, Rodri, Filipe Luis, Diego Godin and Juanfran in the summer of 2019, followed by the sales of Thomas Partey and Alvaro Morata last summer.

So how has Simeone reinvented Atletico and, with it, the perception of his own managerial style?

An overhaul in formation 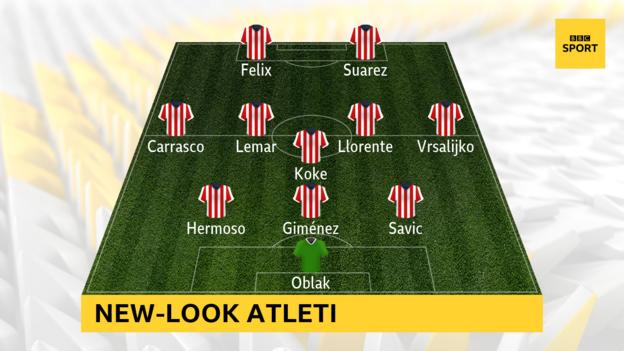 An example of how Simeone's re-imagined Atletico line-up

For the vast majority of Simeone's tenure he had remained wedded to a staple 4-4-2 formation, characterised by defensive discipline and denying the opposition space between their compact lines.

It meant the forwards were relied on to provide the attacking threat.

In early November, after frustrating draws against Huesca, Villareal and Lokomotiv Moscow, Simeone made the bold decision to use three centre-backs in a 3-5-2 or a 3-4-3.

The immediate result was a resounding 4-0 win against Cadiz followed by a victory over Barcelona.

Atletico's record with this tactical setup has been superb – 18 games, 13 wins, three draws – and it has provided more goals, with 45 in La Liga this season already compared to 51 for the whole of the last campaign.

Three centre-backs has also seen a change to a more patient build-up of play – Atletico averaged 48.9% possession in La Liga last season, but 52.4% this season.

In Mario Hermoso, who fills the left-sided centre-back role, they have a very comfortable ball-playing defender, who often looks to pass through the lines and possesses a more expansive passing range, often switching play to the right side.

Simeone's old 4-4-2 approach required wingers and full-backs to remain defensively disciplined, but now the wing-backs in his new system are liberated to fly forward.

At left wing-back, speedy Belgian Yannick Carrasco has played a starring role in his second spell at the club, while on the right Kieran Trippier has been able show off his potent crossing ability (until his betting-related suspension). 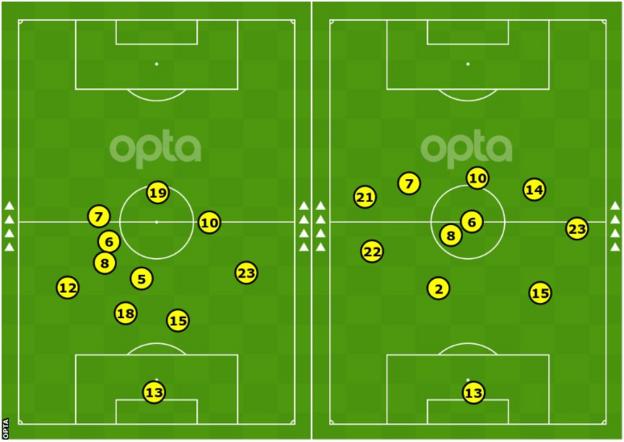 On the left is Atletico's average position in their Champions League last-16 second-leg victory over Liverpool in March, while on the right is the comparatively more attacking shape against Bayern Munich in December

Simeone has often paired this wide threat with two midfield 'number eights' in the 3-5-2 variation of his system.

Thomas Lemar had an unremarkable first two seasons in the Spanish capital, plying his trade on the left wing, leading to suggestions Atletico were looking to sell the Frenchman last summer.

Now, deployed in more central areas as a left-sided eight (or sometimes as a number 10), he has transformed his fortunes.

His control in tight spaces, speed and dribbling in this new role have effectively provided Atletico with a new profile of midfielder, one who can manipulate space for the progressive wing-backs.

But perhaps Simeone's most intriguing transformation has been to the role of Marcos Llorente who, after being developed in the Real Madrid youth setup as a defensive midfielder, failed to impose himself in his natural position after crossing the inner-city divide in a move worth £27m in June 2019.

It was not until last season's Champions League last-16 second leg against Liverpool when a completely different type of player was unleashed, with Llorente substituted on to partner Joao Felix as a striker.

The change worked spectacularly with Llorente scoring a brace to help knock out the reigning European champions.

The Spaniard has gone on to register a remarkable 26 combined goals and assists in 34 starts since that night at Anfield, often appearing in more offensive positions such as a right-sided number eight (on the opposite side to Lemar), a second striker or more recently deputising at wing-back for the suspended Trippier and injured Sime Vrsaljko.

All of this has benefitted the evergreen Luis Suarez.

Dispensed by Barcelona in the summer, the Uruguayan has shown his former employers he is still as prolific as ever, with 16 goals in 18 La Liga starts.

The 34-year-old has added a clinical edge to Atleti's play, over-performing his La Liga expected goals tally by 4.81 goals, meaning he has scored almost five more goals than would be expected from the chances presented to him.

In contrast, Diego Costa and Morata under-performed by 1.85 and 2.98 goals respectively last season.

Similarly, Joao Felix, a player who had previously failed to match the expectations of his £100m move from Benfica in the summer of 2019, has started to flourish.

After starting only 28 matches in all competitions last season, due to injuries and a conservative system, this term he has been given more regular game-time in the front two (19 starts) and has already surpassed his combined goals and assists tally from last season with 14 compared to 12.

The Portuguese has shown pace to get in behind defences and a weight of pass to create chances, alongside a developing poacher's instinct, with eight of his nine goals this season coming from 12 yards or closer.

They have conceded just 16 goals in 23 league games, shipping 0.69 goals per game compared to 0.71 last season.

Simeone ensures his three centre-back system has balance; when one wing-back flies forward, the other often remains in a more disciplined position.

And Simeone has not been reluctant to sit deeper when ahead, with defensive midfielders Lucas Torreira, Geoffrey Kondogbia and Hector Herrera making 25 substitute league appearances between them this season, often entering the fray to help protect leads.

Overall, Atletico are significantly more well-rounded than when they knocked Liverpool out at the same stage last season, and will pose a genuine threat to Chelsea.

That Peter Crouch Podcast: The boys are back and wondering when Peter was at 'peak Crouch'Evil Genius: Was Alfred Hitchcock a real life horror?commentsView Comments49

To use comments you will need to have JavaScript enabled.
49 commentsShowLatestOldestHighest RatedMost RepliedG

10:12Under ‘Women’s Football’ there are four stories about DA MIGHTY LIONESSES! at the top but nothing about the Scotland v Portugal match. Is the BBC 1) Anti-Scottish, 2) Engerlundland Triumphalist 3) Anti-women, or 4) All three?00G

10:07Arsenal should have broke the bank to get him.10D

10:15to gooner7"Arsenal should have broke the bank to get him."Dubbus replied: Broke the bank on Ozil and Pepe and we all know how that’s worked out.

Rogers would have been the right appointment at the time00A

10:06Surely this is old story, the reinvention was complete when he one the title and twice took them to the Champions League.

Why wait till now to give him recognition00B

10:06He might be a great manager, and could even be a really nice bloke in private – who knows. But his touchline antics are undeniably pathetic, and he absolutely does come across as an excitable twerp.10T

09:58I wonder what he’d do with the sort of budget available to the likes of Manchester City, PSG, Real Madrid and others?00T

09:56″rather than a classic modern-day transfer window splurge.”

“Blue is the colour
Outspending is the game”

Abramovich likes time sensitive glittery players/managers- I’m sure he’ll be desperate to add to the one paltry Champions League his fortune has bought.
Won’t happen this season though.

Reply posted by Whatever, today at 10:04Whatever

10:04to Time Barred Skeleton"”rather than a classic modern-day transfer window splurge.”Nice one Raj DohanA direct slur at Chelsea who everyone knows-“Blue is the colourOutspending is the game”Abramovich likes time sensitive glittery players/managers- I’m sure he’ll be desperate to add to the one paltry Champions League his fortune has bought.Won’t happen this season though.Atletico are a far more established club."Whatever replied: One paltry Champions league???
You are deluded my friend10W

The comparison with Mourinho is striking. Mourinho has stayed with the same rigidity that brought him (and Rafa and others) some success in the past, failing to realise that the game has moved on.

Simeone has moved with the times, adapted his team and is being successful. Meanwhile Jose is still trying to recreate his old teams and blaming the players when it doesn’t work.73D

10:18to WhoKnows"Good article.The comparison with Mourinho is striking. Mourinho has stayed with the same rigidity that brought him (and Rafa and others) some success in the past, failing to realise that the game has moved on. Simeone has moved with the times, adapted his team and is being successful. Meanwhile Jose is still trying to recreate his old teams and blaming the players when it doesn’t work."Dubbus replied: He has had the chance to keep and build on his squad while Real and Barca are in financial ruins. Are they really playing better or are the others just below par.00R

09:49This is the bloke who threw himself on the floor and made out he had been shot to get Beckham sent off!

Hope this cheat gets well and truly thrashed!

09:52to Ready"This is the bloke who threw himself on the floor and made out he had been shot to get Beckham sent off!Hope this cheat gets well and truly thrashed!And I’m not even English!"Irons45 replied: How sad14More replies (3)downRemoved commentM

09:35to Mad_Ferret"Experts predict that by 2025 you will never be more than 25 yards from an ex Chelsea manager."magicrm replied: How many times are you going to post this tripe?83T

Don’t hold any hope for Chelsea.
Fully expect Atletico to progress in this one.22W

Reply posted by Whatever, today at 10:06Whatever

10:06to Time Barred Skeleton"Good article-Don’t hold any hope for Chelsea. Fully expect Atletico to progress in this one."Whatever replied: They demolished the ‘best PL team of all time’ Liverpool last year, so on form you would expect them to go through10T

09:29Interesting but I’d like to know more about Athletico Madrid’s Women’s Team, which you haven’t reported on once this year – which is a disgrace. Some of us love women’s football and you do not cover it at all. You cover lower league prem and foreign clubs more!!614C

10:14to TheMiller"Interesting but I’d like to know more about Athletico Madrid’s Women’s Team, which you haven’t reported on once this year – which is a disgrace. Some of us love women’s football and you do not cover it at all. You cover lower league prem and foreign clubs more!!"chris replied: make your own website up then. Nowhere near enough Interested in women football I’m afraid. And they are shocking players.00R

09:29If Simeone had any sense he should stay in La Liga & stay away from here!

But he’ll probably end up in the Premier League one day.Would be great to see him here all things considered.32Y

09:27Still remember him from the 1998 world Cup and that Argentina team that knocked us out !30Removed commentU

09:25I don’t like this man Diego Simeone because he got David beckham sent off at the 1998 World Cup. Nasty individual 🤬611C

10:06to Navjot Sidhu"I don’t like this man Diego Simeone because he got David beckham sent off at the 1998 World Cup. Nasty individual 🤬"Chris Hilton replied: Half-witted Beckam got himself sent off and cost England the game.20T

09:23YET ANOTHER successful coach heavily influenced by Marcelo Bielsa, perhaps worthy of mention.91G

09:23It just shows that the modern approach of sacking the manager after a poor run of form isn’t always the answer120More commentsBack to topunknown
Source