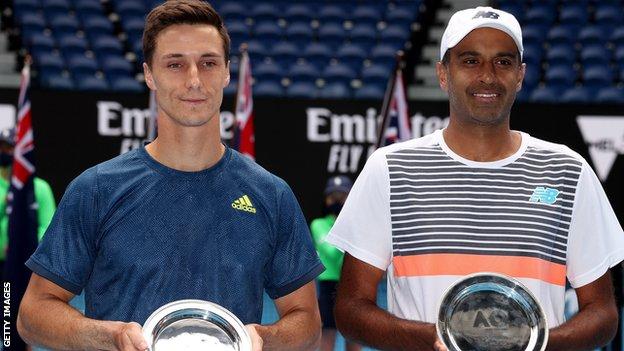 Britain's Joe Salisbury and American partner Rajeev Ram missed out on defending their men's doubles title as they lost to Ivan Dodig and Filip Polasek in the Australian Open final.

The pair were beaten by Croatia's Dodig and Slovak Polasek 6-3 6-4.

Salisbury and Ram were bidding to become the first men's doubles partnership since 2011 to successfully defend their title at Melbourne Park.

"That was too good for what we had today," Salisbury said.

"I don't think either of us were serving our best."

Both sets were tight affairs, with a break of serve in either set separating the pair.

Salisbury has yet to make his Davis Cup debut for Great Britain, with Jamie Murray and Neal Skupski often partnering for the Brits.

"I would love to play it. Hopefully it goes ahead as normal. I don't know what would happen with the partnerships," he said.

"I played with Jamie before, I played with Neal before. I'd be happy to play with either of them and love to be part of the team."

Polasek is only the second Slovak to win a Grand Slam title in doubles or singles, after four-time mixed doubles champion Daniela Hantuchova.

He missed the birth of his second child on Friday to compete in Melbourne.

"This is our first Grand Slam as a team and we're having a lot of fun. I hope it continues," Dodig said.