Japan's Naomi Osaka cemented her place as the outstanding star of the women's game by beating American Jennifer Brady in the Australian Open final to win her fourth Grand Slam title.

Osaka edged the first set when Brady, in her first Grand Slam final, paid for some glaring errors in the final game.

The third seed seized control from that point, racing 4-0 ahead in the second set before sealing a deserved victory.

Osaka has now won two Australian Open titles after also triumphing at Melbourne Park in 2019, with her other Grand Slam successes coming at the US Open in 2018 and 2020.

She has not suffered a defeat since February 2020 after extending her winning run to 21 matches.

Osaka's face lit up with a wide grin, raising her racquet above her head, when she clinched the title on her first match point after Brady looped a return long.

Around 7,500 fans were allowed to watch the final on Rod Laver Arena and Osaka lapped up the acclaim after her US Open victory came behind closed doors.

"It feels incredible to have fans, I played the last Grand Slam without fans, to have this energy means a lot," said Osaka as she clutched the Daphne Akhurst Trophy.

Osaka is the first women's player to win her first four Grand Slam finals since Monica Seles in 1991.

And asked if she could reach double figures in slam titles, Osaka replied: "I'm taking it in sections. Right now, I'm trying to go for five. After five I would think about maybe dividing the 10, so maybe seven or eight.

"I like to take things not big picture. I know that the people that I'm playing against are the best players in the world and, if my time comes to win another Grand Slam, it will come." 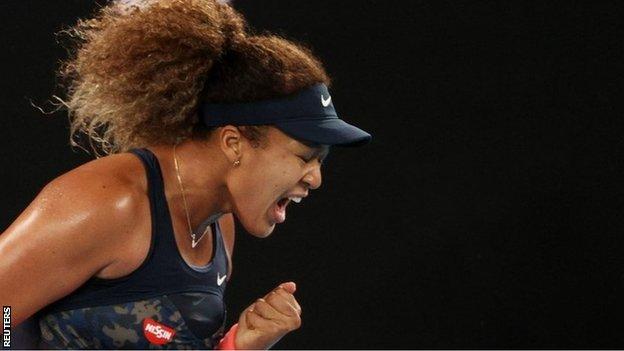 Osaka proves again why she is seen as 'an inspiration'

Softly-spoken Osaka has emerged as the sport's biggest star in recent times and illustrated that yet again with another Grand Slam victory.

On the court, her clean hitting and clear thinking has proved too much for her opponents to handle.

Off the court, she has grown into one of the world's most marketable athletes and found her voice to become a prominent social activist.

"I feel like the biggest thing that I want to achieve is playing long enough to play a girl that said that I was once her favourite player," said Osaka.

"I think that's the coolest thing that could ever happen to me. I just think that that's how the sport moves forward."

In her runners-up speech, Brady said Osaka was "an inspiration to us all". 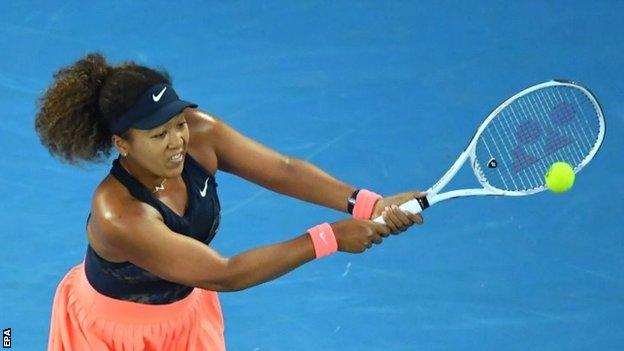 Osaka struggled to land first serves and made 24 unforced errors, but won four of her five break points and saved two of Brady's four chances

Osaka was the clear favourite in the final at Melbourne Park, although a relatively serene path to the final also featured moments where she showed her fight and spirit.

In the fourth round against 2020 runner-up Garbine Muguruza, Osaka had to see off two match points before going on to win, as well as coming through some tricky moments against 23-time Grand Slam winner Serena Williams in the semi-finals.

While her level against Brady was not always at its highest, she still had enough quality in the key moments.

That was most evident at 5-4 in the first set when her relentless pressure forced Brady into the errors which proved pivotal.

And more brilliance enabled Osaka to make a fast start in the second set from which Brady could not recover.

A sweet cross-court backhand winner brought up more break points for a 2-0 lead, taking the first opportunity when another deep return bamboozled Brady into some clumsy footwork.

From that point, Osaka's confidence further grew and she quickly went a double break up.

While Brady did claw one back, Osaka never looked like relinquishing another and served out the Championship to love.

The next question for Osaka will be whether she can transfer this hard-court dominance onto the clay and grass surfaces.

Success has not yet arrived at the French Open and Wimbledon, but her next ambition – once she has celebrated this success – will be trying to change that in the next few months and over the coming years."

"I feel like I have to get comfortable on those surfaces," Osaka said. "I didn't play juniors, so I didn't grow up playing on grass at all.

"I honestly think I'd have better luck on clay, because I think last year I didn't play bad at all. It's just something that I have to get more used to."

Brady comes up short but hopes for 'many more' major finals

While it was not the outcome Brady wanted, the 25-year-old American has plenty of positives to build on after reaching her first Grand Slam final.

It was quite remarkable the 22nd seed even made the second week in Melbourne, having been the only singles player forced into a 'hard' quarantine on arrival in Australia to do so.

Stuck in her room for 14 days without leaving, the former college player had to hit balls against a mattress propped up against the wall, come up with inventive footwork drills and borrow an exercise bike and treadmill from Tennis Australia.

She also admitted to stopping watching Netflix so she would not "do anything other than lay in bed".

Solid serving is the bedrock of her game and that helped her work her way through a kind draw where she did not face anyone inside the top 20 until Osaka.

Brady lost to Osaka when they met in a high-quality US Open semi-final last September and suffered the same fate as she struggled to impose her service game.

The match swung away from Brady in that decisive 10th game of the opening set.

After having regained her fluency following a scrappy start, a double fault at 40-30 gave Osaka hope and Brady then got caught out by a return hitting the baseline to give Osaka a set point out of nowhere.

Brady planted an easy forehand into the net and, ultimately, that sloppy game cost her the match.

Groans from the crowd as Brady grimaced and shook her head reinforced the point.

"It wasn't meant to be, but hopefully there's many more," said Brady, who will rise to 15th in the world after being outside the top 50 a year ago.

View more on twitterLive scores, results and order of playAlerts: Get tennis news sent to your phone
Source

Australian Open 2020: What happens when tennis greats call it a day?

Wimbledon: Can you name every men’s singles champion since 1968?