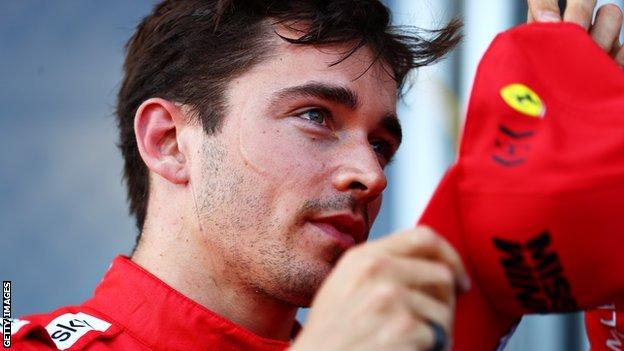 Sunday's Azerbaijan Grand Prix is live on Radio 5 Live and the BBC Sport website from 13:00 BST

In the end, Lewis Hamilton and Mercedes got it together, and the world champion will start a mouth-watering Azerbaijan Grand Prix from the front row, alongside Ferrari's Charles Leclerc and with his title rival Max Verstappen's Red Bull right behind him.

But it could easily have been very different for the seven-time champion, and he knew it.

Hamilton described the situation he was in after qualifying second following a troubled two days in Baku as "a bit overwhelming". Starting the race at the front when for much of the weekend he and the team had not even been in the top 10, he said, was "one of the greatest feelings".

How did they do it? By what team boss Toto Wolff said was "a really thorough engineering programme and we were not shy of trying extreme things, which were as extreme as we [have ever] experienced".

Doubtless there will be those who think Mercedes were 'sand-bagging' – disguising their true pace – through the practice sessions. But this was very much not the case.

Hamilton was seventh in the first session on Friday, 11th in the second, and out of the top 10 for a large part of the final session before qualifying on Saturday.

The car simply lacked grip, and the drivers and team were in a quandary as to what to do about it. It was only towards the end of that final hour that Mercedes finally got the car "in a decent place", as Wolff put it.

"It didn't feel too bad in first practice but second and third practice were pretty much a disaster," Hamilton said. "We did some changes overnight which didn't rectify it. We tried a few different things in P3 and then tried something right at the end and it unlocked the set-up.

"We hadn't been able to get the tyres to switch on like the other cars and the difference was all of sudden the tyres started working and we were back in the game.

"It was the biggest jump we have [ever] been able to make between P3 and qualifying, for sure. It was literally night and day, the car."

Having made the decisive set-up change for the final run in final practice, when Hamilton was third fastest, a position assisted by a slipstream that the team said was worth 0.6secs, they continued down that path for qualifying.

"I had a lot of anxiety," Hamilton said, "because you don't know whether you are going to get it right or wrong.

"Eventually, you just have to let it go. We were here last night until 11 o'clock and then 10 minutes before the session we were still making small changes and you just have to shake it off and go all out."

Team-mate Bottas did not fare so well. The two Mercedes have different set-ups, with Hamilton running lower downforce than the Finn, but Wolff said that was not an explanation for the fact that Bottas was 1.2secs slower and down in 10th place.

"[In the race, the wing level] might have an effect," Wolff said, "but the difference was the car was very tricky and Lewis found the confidence and Valtteri didn't."

On his final run, he might have got there. Bottas was 0.5secs up on his previous lap after five corners, but then came the last of four red flags that had punctuated a staccato but crazily gripping qualifying. 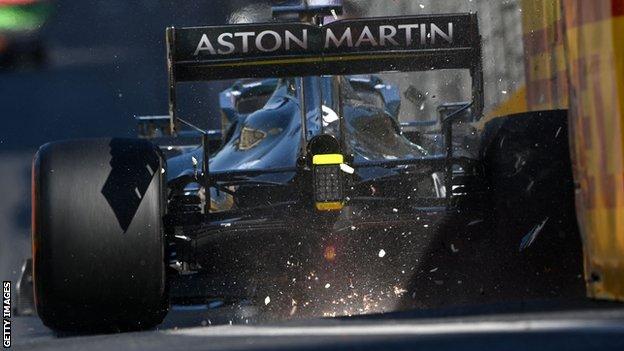 Lance Stroll became one of turn 15's many victims

Where did that Ferrari pace come from?

Ironically, as it turned out, Hamilton might have inadvertently scuppered his own chances of pole position.

As he started his first lap in final qualifying, Leclerc was close behind, finishing his. The tow Hamilton provided boosted the Ferrari's speed on the run to the line, and the result was a lap that was 0.232secs quicker than the one Hamilton was about to do.

With everyone's final runs in qualifying wiped out when Yuki Tsunoda crashed his Alpha Tauri and the second Ferrari of Carlos Sainz spun avoiding him, Leclerc's pole was secure.

It will never be known whether Hamilton or Verstappen could have toppled Leclerc. Both felt they had time in the bag, but Leclerc, too, believed he could have improved, and would have been in the fight for pole regardless.

And just as with Hamilton – if for very different reasons – this was a surprise.

If Mercedes' struggles to find competitiveness were unexpected, the same could be said of the pace of the Ferrari through the weekend.

Leclerc and Sainz were quick from the off, and this was very much not what the Italian team or its drivers thought would happen.

Yes, they had been pace-setters two weeks ago in Monaco, but that was different. The Ferrari has been quick in slow corners all year, so they thought the tight and twisty streets would give them their best chance of the year, even if they did not believe they would be as quick as they were.

But going to Baku, the expectation was that the long pit straight would expose the lack of power from their engine, and they would slip back into the fight at the head of the midfield.

Ferrari ran the smallest rear wing they dared to counterbalance their power deficit, and the car's inherent low-speed grip, on a track with a series of 90-degree corners and a low-abrasion surface, did the rest.

"The complete explanation [for our pace] – I don't have it," Leclerc said, "but it is the guys at the factory and the track working hard since the beginning of 2020 when we started the season and it was very difficult. And the car just got better and better – small steps all the time and small steps in the right direction.

"We did not expect to be as competitive as we were this weekend so it is a bit of surprise. But we have been working hard for that."

Why were there so many mistakes?

The series of crashes and incidents made it one of the most dramatic qualifying sessions for some time, as Aston Martin's Lance Stroll, Alfa Romeo's Antonio Giovinazzi, McLaren's Daniel Ricciardo and finally Tsunoda all caused red flags when their afternoon ended in the wall.

Stroll and Giovinazzi both lost it at Turn 15, a corner which has been particularly troublesome all weekend. Verstappen also crashed there in final practice, as did Leclerc on Friday, and several others had near misses, including Hamilton. And Sebastian Vettel came ever so close to dropping his Aston Martin there in qualifying, locking up heavily and only just missing the wall.

It is a tricky corner, approached downhill through a series of kinks, the last of which is a right-hander which unloads the outside front wheel just as the drivers brake for the 90-degree left that follows.

It has always caused problems, but this year it was especially demanding, and Vettel explained why.

"It's a tail wind," he said. "It's down hill, it's bumpier than last time and it sort of channels the wind there. It's gusty and you don't know what [grip] you get until you get there. It's a bit of a gamble how much risk you can take. I made a mistake and I took too much myself." 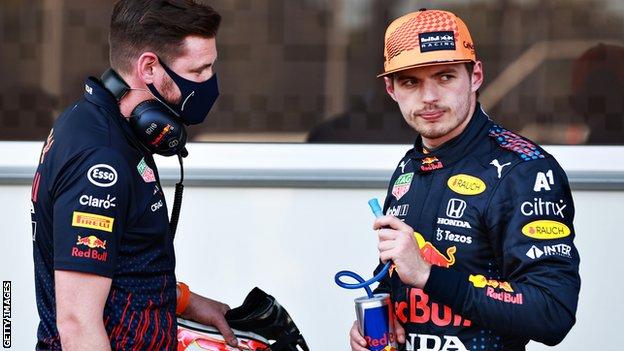 "A stupid qualifying": Verstappen was frustrated with P3

How will the race pan out?

The surprise speed of the Ferrari, and Mercedes' recovery, were not good news for Verstappen, who had looked favourite for pole going into qualifying.

Red Bull were the pace-setters all weekend but qualifying did not go well for them. Verstappen's team-mate Sergio Perez was fastest in final practice but made a mistake on his one lap in final qualifying, and Verstappen did not have a tow on his first run.

He was not happy afterwards, and who can blame him? For much of the weekend he must have been thinking he had a golden opportunity to extend the championship lead over Hamilton he established with his victory in Monaco, and now he starts behind the seven-time champion.

"It was unfortunate," Verstappen said, "but we are still third and can still fight from there. We have a good race car and it is about tyres around here to keep them alive."

Going into the race, Hamilton looks to be in a strong position.

Not only has the Mercedes been a better race car than qualifier on most tracks this season – and faster than the Red Bull – but Hamilton's low-downforce set-up has given his car prodigious straight-line speed. That means he will not only be difficult to pass but will also find it easier to overtake if he finds himself behind someone.

His big concern might be whether his lack of downforce will affect his tyre wear, but he seems confident he should be in decent shape.

"We have got the right balance with the wing," he said. "Race pace we weren't as quick as the Red Bull [in Friday practice] but we were in the mix so we should be close with these guys [Leclerc and Verstappen] hopefully."

Tyre wear could also be a concern for Leclerc, who struggled badly with it on the race runs on Friday and ran into what is known as rear 'graining', where the rubber surface tears and loses grip.

Leclerc said: "My P2 [race] pace wasn't great but it was not a great session for me, being in the wall first of all and then on the long runs I didn't do a good job managing the tyres. So it was more coming from me than anything else. But it is fine. I know where to work and it should be all OK."

With the three drivers most would regard as the best in the world in the top three positions on the grid, a competitive-looking Alpha Tauri fourth in Pierre Gasly's hands, and the second Ferrari of Carlos Sainz fifth, the race – on a track with a reputation for incident-strewn grands prix – promises well indeed.