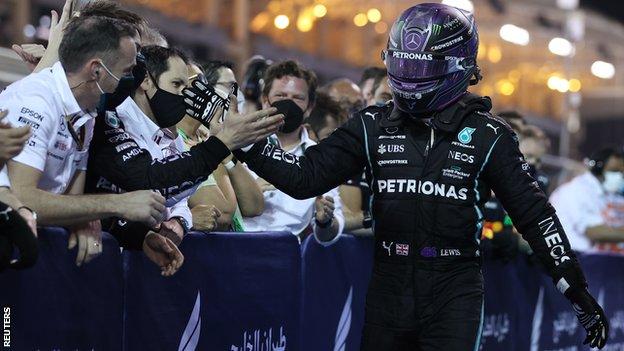 The 2021 Formula 1 season started with a race to showcase the sport at its very best.

The Bahrain Grand Prix distilled down to a straight fight between Lewis Hamilton's Mercedes and Max Verstappen's Red Bull, of the sort followers of the sport have been anticipating for years.

It was full of richness and intrigue – a tense and gripping strategic fight between F1's two top drivers and two greatest teams from which, to emerge triumphant, Hamilton was required to draw upon all his skill and experience.

And the result was decided by both wheel-to-wheel racing and a dash of controversy, when Verstappen was forced to hand back the lead he had just taken because he had gone off the track while doing it.

"I loved every minute of it," Hamilton said. "Every minute of the weekend I've loved. We knew we were behind in performance. These guys [Red Bull] have done a better job so far. So to come away with this knowing we were not the fastest this weekend is a real result.

"We were fortunate today with Max going wide in Turn Four. But that won't happen again, I'm sure. So we have to do better and be smarter, with the fact we don't have the fastest car at the moment. But that's all good for me – I don't mind having to pull out extra in order to make the difference."

Mercedes were left dumbstruck at how they had pulled off what Hamilton had at one stage thought was "pretty much impossible", while Red Bull were left ruing what might have been. It sets up what could be a classic season beautifully.

The incident that decided the race

Hamilton's victory hung on a moment of major contention.

After Verstappen had closed in remorselessly on the Mercedes after his final pit stop, he passed Hamilton around the outside at Turn Four with four laps to go. But he ran off the track while doing so, and immediately Red Bull were told by race director Michael Masi to hand the position back.

Verstappen did so. It appeared as if it would only be a matter of time before he got the move done again, but he never got quite close enough to have another go.

It's never especially satisfying to have a sporting event decided by the call of a referee, especially a controversial one, and this one was certainly that.

Mercedes F1 boss Toto Wolff said he was "confused"; his Red Bull counterpart Christian Horner was "frustrated". Verstappen was his usual matter-of-fact self. "It is what it is," he said.

The moment was heavy with irony as well as controversy.

Earlier in the race, Red Bull had complained to Masi that the Mercedes drivers were running wide at Turn Four. That prompted Masi to get on to Mercedes to tell them to warn their drivers that they would be penalised if they continued to transgress.

Hamilton was angry at the time, and afterwards accused the officials of "changing their minds halfway through the race".

And yet it was Verstappen, whose team had triggered the whole thing, who ended up losing out most.

Were the rules correctly applied?

The issue arose from a clause in the race director's event notes that said, in the race, track limits at Turn Four would "not be monitored with regard to setting a lap time".

But it went on to refer teams to article 27.3 of the sporting regulations.

This states that drivers "may not deliberately leave the track without a justifiable reason" and that if they did so, they may rejoin it "without gaining any lasting advantage". It adds that the race director has the discretion to ask the driver "to give back the whole of any advantage he gained by leaving the track".

On that basis, then, it's clear why Verstappen was dealt his unfortunate hand – he had gone off the track, and gained a place by doing so. That's not allowed in the rules. It was a clear advantage which he had then been told to give back.

But the complication is over how track limits were dealt with at other times, and over the question of what is a "lasting advantage".

It's said that running wide out of Turn Four is about a 0.2 seconds gain in terms of lap time. Red Bull interpreted the rules as saying drivers could not run wide to gain that performance; Mercedes as the opposite.

Wolff claimed: "At the beginning of the race, it was said track limits in Turn Four wouldn't be sanctioned. And then in the race suddenly we heard that if you continue to run wide it would be seen as an advantage and could cause a potential penalty, which we debated with the race director but there was nothing we could have done."

Masi disagreed. "It was mentioned clearly in the drivers' meeting and notes that it would not be monitored with regards to setting the lap time but would always be monitored in terms of the sporting regulations and that a lasting advantage could not be gained," he said. "Nothing changed during the race."

He added that the FIA had two people monitoring that corner at all times during the race and transgressions were "not a constant thing".

But that was contradicted by Hamilton's radio message response when he was warned about it with just under 20 laps to go: "I've been doing the same thing all race."

Horner said: "Track limits are always going to be contentious but we do just need to have a consistent situation. You can't say it's OK to use it in a race but you can't overtake out there. It should be black or white; there shouldn't be shades of grey."

Wolff added: "We need to be consistent in the messages. They need to be clear and simple and not a Shakespeare novel that leaves interpretation."

How Mercedes pulled it off

Before that incident, Verstappen had cruised up to the back of Hamilton with such steady intent that he seemed sure to be able to pass again.

The reason he failed to do so is that just after letting Hamilton back past him on the back straight, Verstappen had a big snap of oversteer in Turn 13, which overheated his tyres.

"From then onwards, I just didn't have the tyres to attack," Verstappen said. "The tyres were 10 or 11 laps younger [than Hamilton's] but that advantage goes away when you get within 1.5 seconds, and the wind and its direction were not helping.

"I tried again but I just didn't have the grip any more."

Although Verstappen was calm and realistic, he made it clear he felt this was one that got away. And Mercedes took it away from him by some clever strategy and some remarkable race management by Hamilton.

Firstly, Hamilton did well to stay within two seconds of Verstappen through the first stint, ensuring that he was always close enough to be able to stop first and jump into the lead.

Mercedes' chief strategist James Vowles took the first opportunity he had to do that, bringing Hamilton in on lap 13. Stopping first locked the race into its pattern – Hamilton now in front, Red Bull wanting to run Verstappen as long as possible before each of his two stops to give him a tyre advantage late in the race.

While Hamilton's team-mate Valtteri Bottas was in contention, Red Bull were stuck.

Mercedes stopped Bottas two laps after Hamilton. Verstappen was far enough ahead of the Finn to be able to respond without losing position, but had no opportunity to stay out and build up a significant tyre off-set.

Mercedes were planning to play the same game at the second stops. Bottas' second stop would have left Red Bull with a dilemma – respond immediately again and have only a couple of laps of tyre advantage over Hamilton; or delay the stop for a bigger tyre off-set, but be forced to pass two Mercedes rather than one to win the race.

But a stuck front wheel delayed Bottas by about 10 seconds, and now Red Bull had the gap they needed to run Verstappen longer. He stopped when he had a 10-lap tyre advantage over Hamilton – worth about a second a lap – and 17 laps to close an eight-second lead.

It would have been enough – if only Verstappen had not had the flick of overseer that dragged him wide when he caught and passed Hamilton.

There are also questions over Red Bull's tyre choices. They went into the race with one new set of each of the medium and hard tyres, whereas Mercedes had two new sets of hards, a strategy that is not only faster but also gave greater strategic flexibility.

Verstappen said: "With these cars, the last few years it is very important to have track position and we gave that up today.

"But last year we would have been super happy with this result and now we are disappointed. So we definitely made a good step forward." 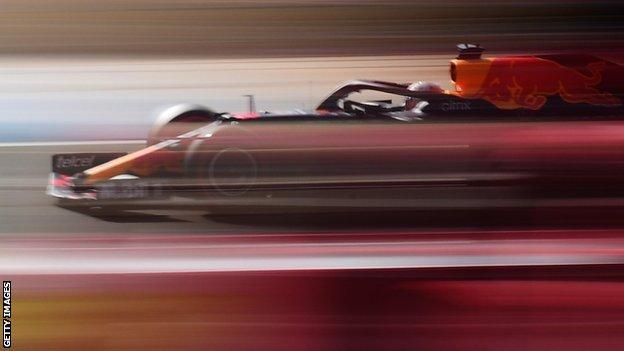 Where do things stand now?

Mercedes may have dominated the past seven years in F1, but this year they look to have a proper fight on their hands.

"This has started off as one of the toughest [seasons]," Hamilton said. "Red Bull's pace is incredibly strong. We can't match them in qualifying right now. That's a big step for us. I thought we could get closer in the race but that was a little bit too close for my liking.

"Of course, this is only one race, so we don't know what the future holds. With the pace they have, they could be ahead a lot more, but we're going to work as hard as we can to try and stay close in this battle, and I hope for many more of these sorts of races with Max and Valtteri."

Wolff added: "I have no doubt they are extremely difficult to beat. They are the ones leading the pack and today the racing gods were on our side. It is not that we found some awesome performance; it was a combination of great strategy, a solid race car and being fortunate at the end."

Verstappen, meanwhile, had the air of a man who knows this might just be his year.

"Of course I am disappointed," he said, "but it is a long season and we will have 22 [more] opportunities to do better."

It surely won't be long before he takes one. What a battle there is in store.