Alonso is back racing in Formula 1

Fernando Alonso says he did not expect there to be so much attention on his age as he makes a Formula 1 return after two years away.

The two-time champion, who is driving for Alpine, the former Renault team, is 39 and will turn 40 in July, while seven-time champion Lewis Hamilton is 36 and Alfa Romeo's Kimi Raikkonen 41.

Alonso said: "My age is a big question but I am a little bit surprised by that. I am not that old. The guy who is dominating the sport is 36. I am not 20 years older."

The Spaniard, who stated in a BBC Sport interview this week that he was "better" than the other drivers on the grid, said on Thursday there were "no guarantees" he would return as strong a driver as he was when he left.

"I hope so," he said. "You just have your own confidence, trying to deliver what the team expects from you.

"When I decided to be back, I was trying to focus on the preparation, not only physically but also technically being with the team and trying to be up to speed with the F1 language which, is a little more technical than other categories."

Alonso, who has won 32 Grands Prix and is widely regarded as one of the greatest F1 drivers in history, has spent the two years since he left F1 racing in other categories.

He won a second Le Mans 24 Hours victory in 2019, as well as the World Endurance Championship, has twice competed at the Indianapolis 500, and also tried out the Dakar Rally.

He said that after just one and a half days in the car in pre-season testing he did not feel completely ready for the new season.

"It takes always time and I'm not 100% yet," Alonso said. "It is the same for many people, I guess. Some changed team, some just need to re-adapt to the new aero regulations and tyres. 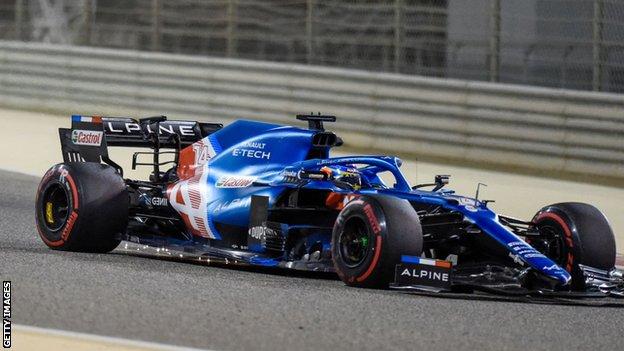 Alonso has signed an initial two-year deal with Alpine but said he had no clear timeframe for how long he expected to be with the team, which has targeted the new 2022 technical regulations as a chance to return to full competitiveness.

"F1 is not mathematics where you can plan things ahead," Alonso said. "You are just trying to make it as fun and enjoyable as possible at the same time as working hard to deliver the results and get the dreams in your head.

"It is no different for me, trying to make this a good shot of trying to win races and be as competitive as possible but not with a clear target."