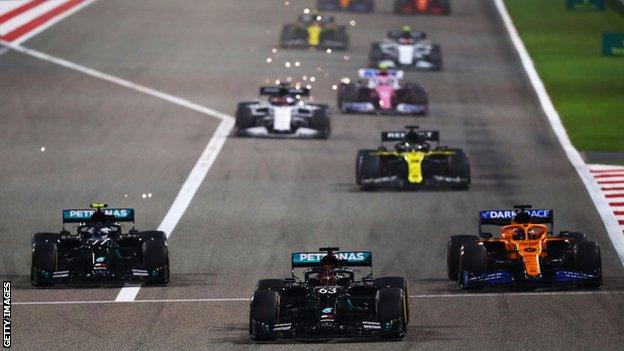 Britain's George Russell says he has proved he can fight for world titles and wants a car that will allow him to do that.

The Williams driver, 23, starred in a one-off race for Mercedes in Bahrain last year, when he stood in for Lewis Hamilton, and lost a win only to a team pit-stop error.

Russell said: "That opportunity I had last year showed that when the pressure is on, when I am thrown into the deep end, I was able to do a pretty solid job."

He added: "I got a small taste of being at the front. I believe in myself. I believe I'm capable."

Russell is in the running for a Mercedes seat in 2022, with both Hamilton and team-mate Valtteri Bottas out of contract.

"I don't believe I'm the finished product yet," he told 5 Live Breakfast. "I believe I've still got to improve but I think I'm definitely capable of winning races and fighting for World Championships.

"Ultimately I need to find myself in a car and a team that I think will give me the best opportunity in doing that because I need to be in that position now to start capitalising when I get into my prime."

He said there was "no bitterness" at his Williams team, who gave him his debut in 2019, at his desire to move up the grid.

"They're realistic," he said. "They know my ambitions and they want more than anything to be able to provide me with a car that is capable of winning races and they gave me my opportunity, I'm a loyal guy, I've had a fantastic time with them, equally I don't believe I'm a driver who is deserving of finishing 20th in the championship."

He said he believed Williams would continue to be towards the back of the grid this year, because there have been restrictions on the changes teams could make to their cars over the winter, but that they would be in a better place when new rules come into force in 2022.

"The team definitely can get back," he said. "It won't be this year, I think their mid- to long-term goals are realistic and I think the things they have put in place, they're all promising things. So as a team we will be in the bottom three this year but I'm pretty confident that Williams will not be last in 2022." 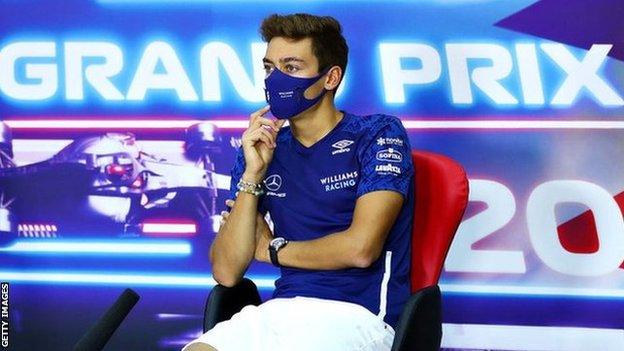 George Russell has never finished in the points while in the Williams, but did collect three points in his only race with Mercedes

Russell added that he was "quite proud" to be named this week as one of the three directors of the Grand Prix Drivers' Association this week – replacing former F1 driver Romain Grosjean – alongside Sebastian Vettel and director Alexander Wurz.

Russell said: "As drivers we always get together. Probably once every couple of events, we'd stay behind after the drivers' briefing and we'd talk about certain issues – whether it was the improvements of F1 race cars, tyres, safety, upcoming events, how we could potentially change tracks to be favourable to racing and the fans – and I've always really enjoyed it.

"This was a great opportunity for me to almost be at the helm with Sebastian Vettel and Alex Wurz and being the people to voice the drivers' opinions.

"I was always quite vocal myself and obviously I'm in the same generation as probably half of the F1 group now. Sebastian almost represented the older half and I'm almost representing the younger half.

"I've got a good relationship with everybody and I thought it would be a great opportunity to actually play an important role into the future of safety, into the improvements of Formula 1 and it's something I will enjoy doing with pride as well."