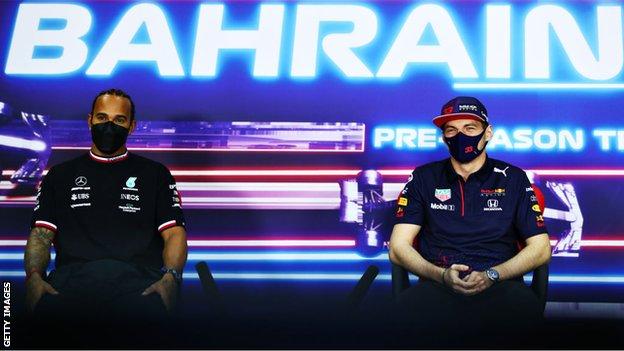 Lewis Hamilton says world champions Mercedes are "not the fastest" team heading into the first race of the new Formula 1 season in Bahrain.

Mercedes struggled with their car in testing and Hamilton said the title fight would "absolutely" be closer than 2020, which he and his team dominated.

The seven-time champion said: "It's massively exciting for us as a team.

"We're not the fastest. How are we going to work to get to where we want to be? That challenge is so exciting."

Hamilton added that the team had been working hard in the week and a half since testing finished to understand the problems they were having with their car, which was unstable at the rear.

"I am fully confident they have done the absolute best," Hamilton said, "but it is going to be a continued battle to get the car to be where we want it to be."

Red Bull appeared to be in the best shape after pre-season testing, but have been keen to play down claims that they are favourites.

Their driver Max Verstappen said on Thursday: "We will see. What matters is that you perform when it counts.

"You just have to focus on your job and stay calm and focused because it just distracts you."

Hamilton, who has the chance this year to set another all-time record and win an eighth world title, having equalled the seven won by Michael Schumacher in 2020, said he would continue to take the knee before races to show his support for anti-racism.

F1 as a sport has changed its pre-race demonstration this year, widening its scope beyond purely anti-racism to show support for inclusion and diversity.

Drivers are free to show their backing for any cause that falls within that description but Hamilton said he would continue with what he did last year.

He said: "We have an amazing platform here. It is great to see the steps F1 and Mercedes are taking in terms of making the sport more diverse.

"And I plan to continue to take the knee, because what is really important is when young people are watching and they see us taking the knee, they will ask their teachers or their parents, 'Why are they doing that?'

"It sparks an uncomfortable conversation. It means parents have to educate themselves. And the kids are getting educated.

"It's a fight that's not won and will continue on for a long time I'm sure, but we are in a good time where conversation is healthy." 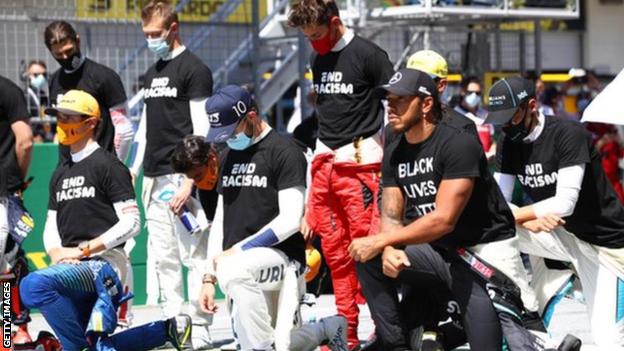 Some drivers 'took the knee' before races in 2020, while others chose to stand

Hamilton heads into this season with a contract only until the end of the year, having signed a one-year deal with Mercedes over the winter.

But he said he was not going into the season thinking it would be his last as an F1 driver.

"I don't feel like I'm at the end," Hamilton said. "The next eight months or so will let me know whether I'm ready to stop. I don't think I will. But you never know."

He added that he was "fully committed to this sport" and that he had arrived in Bahrain for the start of the season "more excited than I have in a long time. We are going to have a great battle one way or another and that's what I've always loved".

This week F1 has received a letter from 57 British MPs and 22 human rights groups asking for the sport to carry out an independent inquiry into allegations of human rights abuses linked to the race in Bahrain.

Hamilton last year received a letter from Mohammed Ramadhan, a man who said he had been arrested for supporting Bahrain's pro-democracy movement and was now on death row. The letter contained a drawing from the man's son, Ahmed, and plea for Hamilton to "please save my father".

Hamilton said on Thursday that the letter "weighed quite heavily on me" and he had spent the winter researching the issue, including speaking to Amnesty International and other human rights groups, the UK ambassador in Bahrain and Bahraini authorities.

"The steps I have taken have been in private," he said, "and I think that's the right way to go about it and I don't want to say too much that might jeopardise any progress.

"That's as much as I want to say but I am committed to helping in any way I can.

"It is not in my power to choose where we go and race but, just reflecting on the powerful position we are in, human rights I don't think should be a political issue. We all deserve equal rights.

"As a sport we do go to lots of different places and there are issues all around the world, but I don't think we should be going to these countries and just ignoring what's happening."