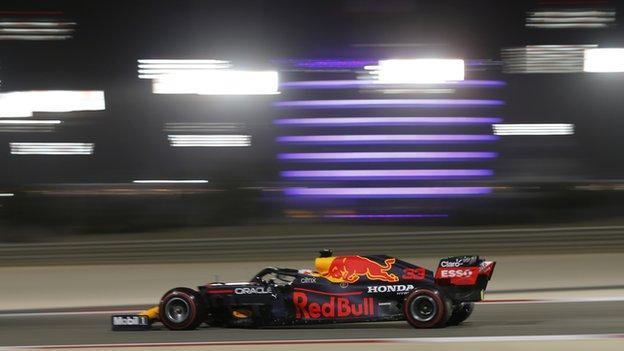 Third practice and qualifying are live on the BBC Sport website from 12:00 GMT on Saturday

Verstappen was first and Bottas second in the first session with Norris third.

The field appeared very competitive – less than a second separated Verstappen in first place from Fernando Alonso's Alpine in a disappointing 15th.

It was a mixed day for all the movers up and down the grid.

Sainz impressed in the Ferrari, with his team-mate Charles Leclerc not stringing together a strong lap and ending up 12th, 0.5secs off the Spaniard.

And Alonso, returning to F1 after two years away, was four places and 0.169secs down on Alpine team-mate Esteban Ocon.

Verstappen's pace continued the strong impression Red Bull had left after pre-season testing, in which Mercedes were struggling with an unstable car.

"It's been a good day," the Dutchman said. "With the heat, not easy to find a really good balance around the whole lap but it was a positive day.

"Now we have to show what we can do in qualifying."

Mercedes appeared to have made progress since then, with the car looking much more stable out on track – although Bottas did complain that it was "undriveable" when on his race simulation run late in the second session.

On the race runs, there was nothing to choose between Hamilton and Verstappen, both averaging more or less the same time over their stints.

But Hamilton said Mercedes were still struggling with the rear instability that plagued them in testing.

"It wasn't where we wanted," he said. "This weekend it is looking better but not perfect. We are working as hard as we can. We still have a hill to climb but we are staying positive.

"We thought Red Bull would be as fast as they are if not faster. We know they're leading at the moment. McLaren are looking great, and it's great to see them taking a step.

"Stability. It is all about having a stable car and how to make the tyres last. That's going to be key in this climate and with the wind that we have here."

McLaren were the other team to make a big impression on the first day of the new season, while Ferrari also appear to have made a step forward after their worst season in 40 years in 2020.

"We look quick today but it is fairly obvious what's going to happen tomorrow," said Norris. "It's gonna be the usual front four cars ahead of us."

Meanwhile, Alpine and Aston Martin – the new names for the teams that were called Renault and Racing Point last year – had a low-key day.

There was only one incident – when Kimi Raikkonen crashed his Alfa Romeo at Turn Three, wiping off the front wing.

Mick Schumacher, son of seven-time champion Michael, was 18th fastest, two places ahead of his Haas team-mate Nikita Mazepin, the US-based team looking to have the slowest car on the grid.