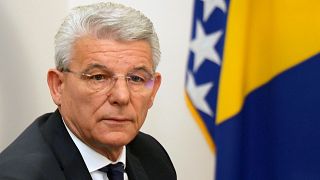 An explosive memo that advocates redrawing the borders of independent countries formed after Yugoslavia’s breakup and reducing Bosnia and Herzegovina (BiH) to a third of its current size has sparked fears of renewed conflict in the region.

The unsigned document, which is claimed to have reached the highest EU circles, proposes Serbia, Croatia, and Albania being expanded to swallow up parts of neighbouring Bosnia, North Macedonia and Kosovo.

The idea, widely criticised in the region, is to continue where the Yugoslav wars stopped and create monoethnic states – in direct contradiction with both EU and other international efforts to foster multiculturalism in the Western Balkans. 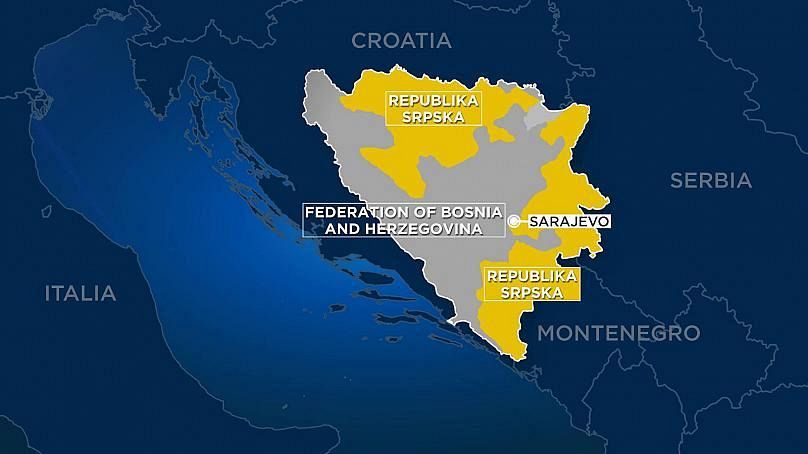 The current make-up of Bosnia and HerzegovinaCredit: Euronews

Where did the controversial document come from?

It is alleged the ‘non-paper’, an EU term for an unofficial set of talking points shared confidentially between governments or institutions, originated from the office of Prime Minister Janez Janša, who refused to confirm or deny those claims to Euronews.

But the idea appears to have been previously broached by Slovenia’s President Borut Pahor’s during a visit to Bosnia last month. Šefik Džaferović, one of Bosnia’s three presidents, told Euronews that Pahor had mentioned redrawing the country’s borders.

“The Slovenian president said that in certain circles in the EU there are those who think it’s necessary to ‘finish the process of Yugoslavia’s dissolution’ before proceeding with the integration of the Western Balkans into the [European] Union,” Džaferović said in a written statement. 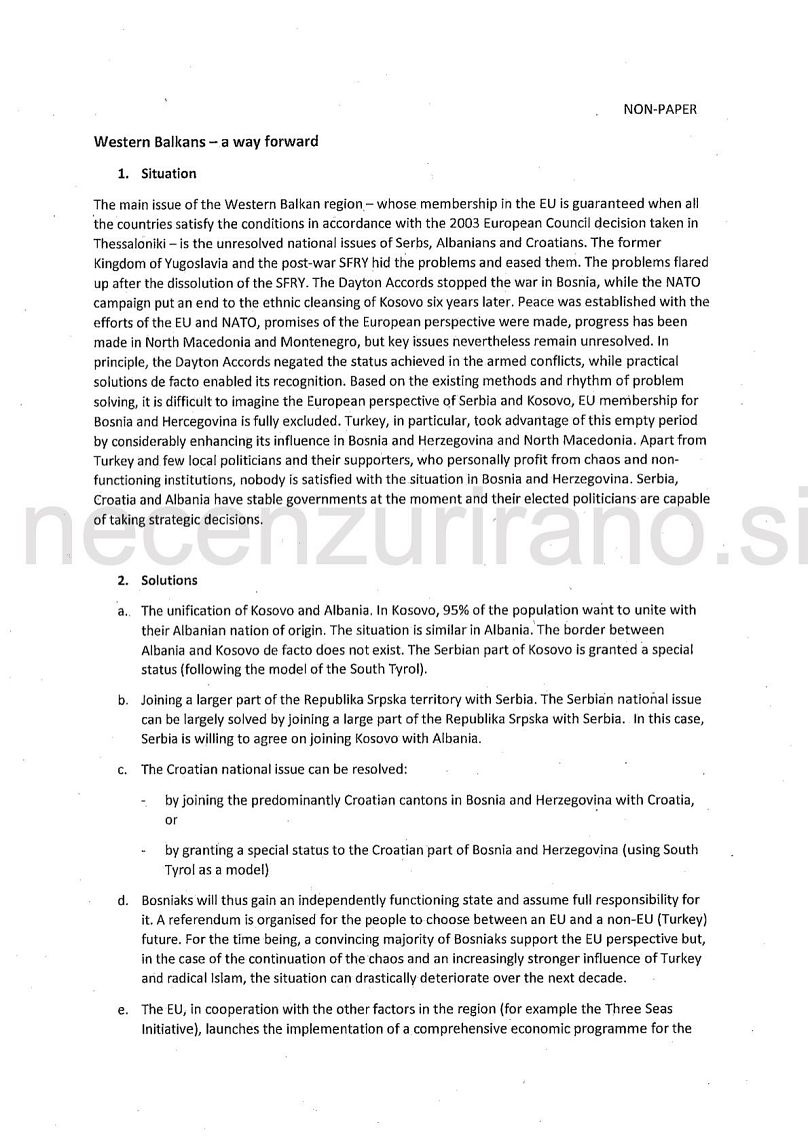 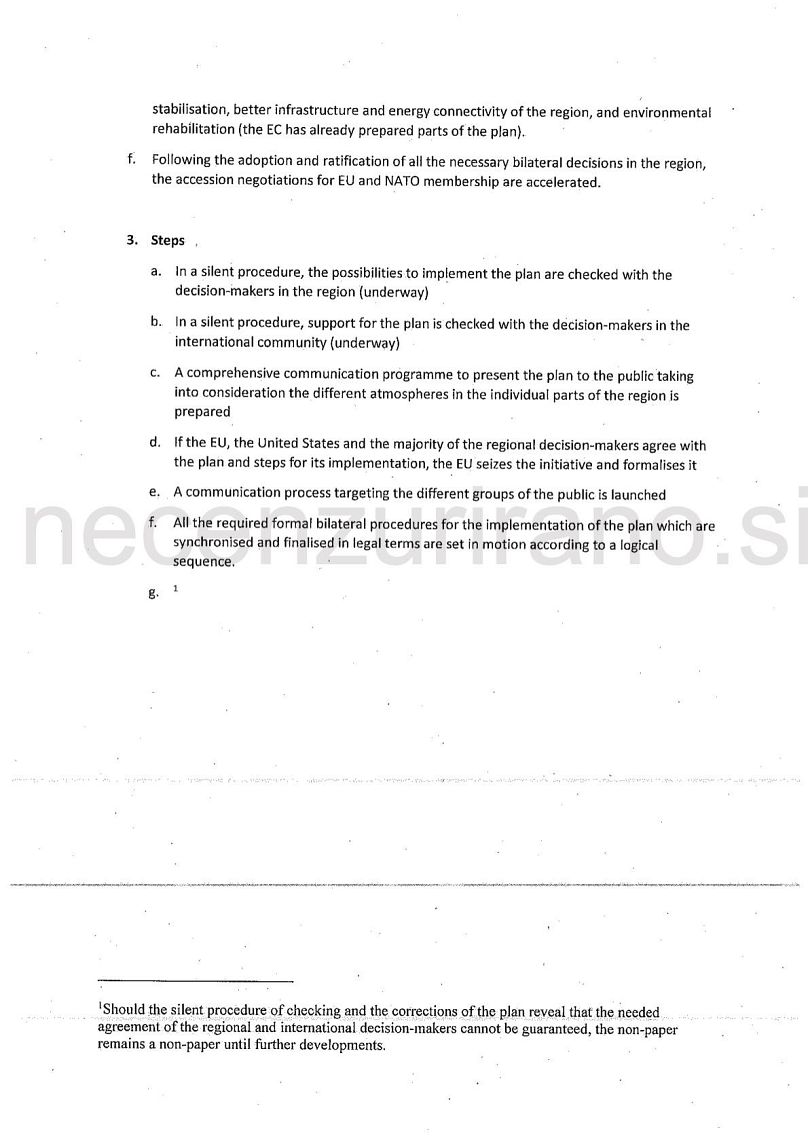 “I responded to that by stating that the process of Yugoslavia’s dissolution was in fact finished. He then asked us whether a peaceful dissolution of Bosnia was possible, and both Komšić [the Bosnian Croat member of the presidency] and I replied that those who are promoting such ideas are pushing this country and the region into war.”

Džaferović added the memo was a clear attempt at destabilising the country.

“The document provoked justified fears in Bosnia and showed that secessionist powers are eager for signals from the EU to launch a bloodbath. I don’t think this came from Brussels officials, but rather from radical circles who are trying to present their retrograde ideas as being European,” he said. “Any redrawing of borders along ethnic lines would destabilise not just Bosnia and the region but also affect the stability of the entire continent.”

One of Bosnia’s three presidents

Pahor’s office, contacted by Euronews, said the president was an advocate for Bosnia and Herzegovina and its territorial integrity.

“He regularly warns against ideas about the disintegration of BiH and the redrawing of borders in the Western Balkans,” said the statement.

But it went on to say Pahor had brought up the idea of border changes in the region as early as September 2020 during a visit to North Macedonia.

During his address to the Macedonian parliament, Pahor said “the belief might eventually prevail in the region that the disintegration of the former Yugoslavia is not yet complete and that ethnic borders should be established instead of the existing ones.”

Shortly after PM Janša openly denied the existence of the memo in a telephone exchange with Džaferović on Friday, another regional leader pointed the finger at Slovenia.

“I saw it [the paper],” Rama said on Vision Plus TV channel, which was discussing the forthcoming parliamentary elections in Albania.

“I spoke to the Slovenian PM some time ago. I talked to him about the idea in general, and I saw the document.” 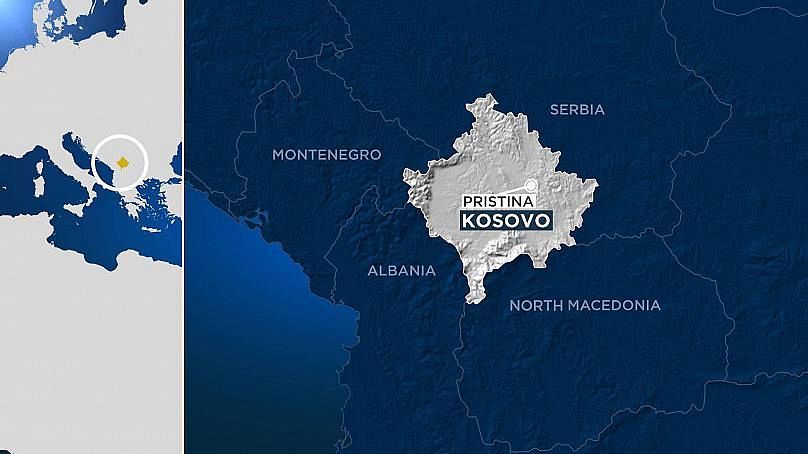 What’s the back story?

Slovenia was the first to break away from Yugoslavia at the very onset of the wars launched by its disintegration. A brief conflict with the Yugoslav People’s Army followed its declaration of independence in 1991.

As the wealthiest and northernmost part of the former republic, it set its sights on speedy EU membership and rarely looked back at its Balkan neighbours.

Prolonged and bloody wars then broke out across the region.

The suggestion that provoked the most ire from the memo was the cutting down of Bosnia and Herzegovina to about a third of its size and allowing it to choose “between an EU and a non-EU (Turkey) future.”

The comment has widely been deemed racist and discriminatory towards the Bosniak majority, nominally considered to be Muslim.

It was a harrowing reminder of the 1992-1995 war when the country was torn apart by ethno-nationalist fighting after declaring independence following the break-up of Yugoslavia.

The Bosniaks in the country suffered the most losses and were routinely targeted for their religious affiliation.

It culminated with the Srebrenica genocide in July 1995, where more than 8,000 Bosniaks, mainly men but also women and children, were slaughtered by the Bosnian Serb army.

In 1998 conflict broke out between Serbian forces and ethnic Albanians in the breakaway region of Kosovo.

Kosovo declared independence in 2008, but it is still not recognised by Serbia. 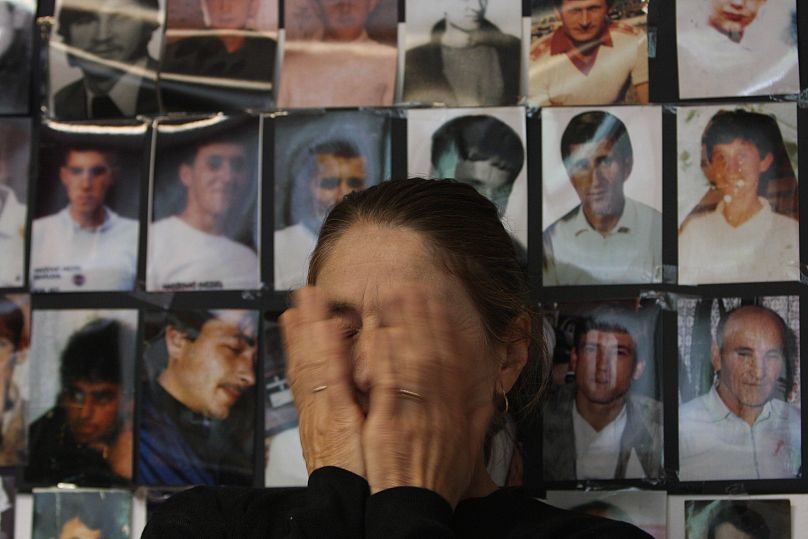 Bosniak woman, Habiba Mašić, survivor of the Srebrenica massacre, react as she listens to news of the arrest of war crimes fugitive Radovan KaradžićCredit: AP

How significant is this memo?

For Robert Botteri, editor at the Slovenian independent weekly Mladina, Janša’s refusal to confirm or deny the claims is a form of admission.

“We might not get a straight answer to whether he is the author because even when caught, Janša always denies his involvement.

“However, all of the circumstances point to the fact that the document is authentic.

“While we can deliberate on the name of the author, it is clear that it came from the circles of people such as Janša, Viktor Orban, and Aleksandar Vučić.”

For Bosnia, the memo comes at a time when the international community is distracted by other issues, such as the ongoing pandemic and the new administration in the United States.

“There’s a sense of Western entropy,” said Kurt Bassuener, senior associate at the Democratic Policy Council, a Berlin-based think tank. “There is no rudder right now, so now is a good time to pursue maximalist agendas.”

Bassuener believes most member states would not support the ideas outlined in the alleged non-paper, but that does not make the content less problematic, according to him.

“I do think it’s a trial balloon to see what the reaction is – a type of testing of the immune system for reaction to ideas that were seen as absolutely toxic and infectious before,” he said.

He believes the approach to Bosnia is the most worrying because its current, heavily-ethnicised system is the most vulnerable to outside interference.

“The idea that the dissolution of Yugoslavia is unfinished is a completely revisionist view of what brought an end to the country and the series of five conflicts, of which Bosnia’s was by far the worst. And to make Bosnians the problem?”

Bassuener called out the memo’s Islamophobic tone, explicitly stated in the suggestion that Bosnia could align with Turkey and not the EU.

Here he sees a clear indication of Janša’s ambitions to join the ranks of right-wing, migrant and Muslim bashing politicians in other EU states such as Orban or Poland’s Andrzej Duda.

“Janša will get a more immediate payoff by saying something so radical and testing for reaction, and perhaps scaring those who are on bureaucratic autopilot,” he says, referring to the eleventh-hour knee-jerk reactions often provoked in Brussels after the actions of Duda, Orban, and others are tolerated for too long.

By threatening disorder, Janša might gain an upper hand in negotiations with the EU over things he actually wants.

“This will make it easier to pursue lower-order transactional politics,” he concludes.

Botteri agrees parts of the memo are Islamophobic and thinks this is a calculated move by Janša to gain support from Christian conservatives across the continent.

“Orban and Janša are well suited by something like this happening because it would raise their profile in circles that want Europe to become ‘Christian again’. Orban has for a long time presented Hungary as the bastion of Christianity and Europe’s protector against Muslims, and now Janša is following in the same footsteps.”

Botteri believes that the memo’s purpose is to create further conflicts on the continent and to destabilise the Union itself.

“15 years ago, Europe thought how the entire continent would become a part of the European Union, even negotiating with Turkey,” he said.

“Today, the process has stopped, while conflicts keep escalating at the continent’s borders.

A strong European Union was never in the interest of the far-right forces, as they have always been against a unified, democratic Europe.”

This also marks a significant shift in power within the Union itself, with Bosnia acting as collateral damage for much bigger plays at hand.

“With the support of the likes of Salvini in Italy, Le Pen in France, and Wilders in the Netherlands, this anti-European alliance could become the second-largest force in the European Parliament,” he said.

The memo was greeted negatively among Slovenians themselves.

“People in Slovenia are horrified and frightened because we all know what ethnic border changes meant 30 years ago in Bosnia,” said Botteri.

Slovenia is currently in the throes of a strict lockdown and public protests are banned.

“All you can do is write about it. There is no other recourse. And once Janša takes over the EU Presidency, he will put this on the agenda, non-paper or not,” concluded Botteri.

Every weekday at 1900 CEST, Uncovering Europe brings you a European story that goes beyond the headlines. Download the Euronews app to get an alert for this and other breaking news. It’s available on Apple and Android devices.