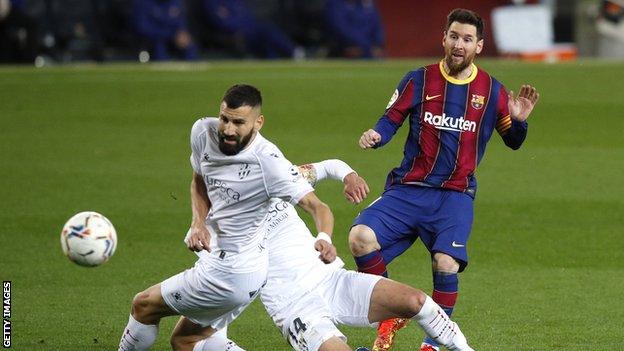 Lionel Messi scored twice and made another on the day he equalled Xavi's record for most Barcelona appearances.

Messi was playing for Barca for the 767th time and his curled double, along with goals from Antoine Griezmann and Oscar Mingueza, helped his side to a comfortable win over struggling Huesca.

Rafa Mir scored a controversial penalty for Huesca at the end of the first half, but Barca cruised to the victory.

The 33-year-old Argentina forward has won La Liga 10 times and the Champions League on four occasions among 34 trophies since he made his competitive debut as a substitute in a 1-0 away derby win against Espanyol on 16 October 2004.

Messi, whose contract expires at the end of this season, will break former Spain midfielder Xavi's record on Sunday if he plays in the league game at Real Sociedad.

Relive Barcelona's win over Huesca as it happened 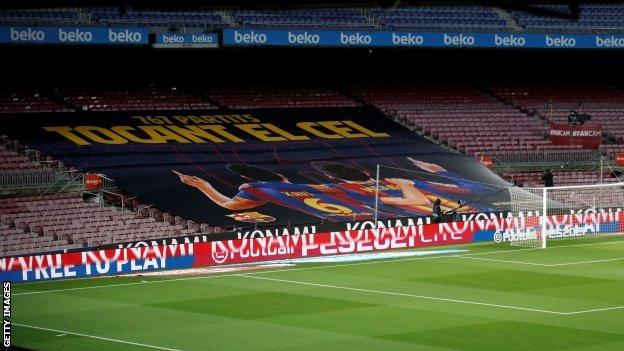 Barcelona were knocked out in the last 16 of the Champions League by Paris St-Germain on Wednesday but still have hopes of winning a domestic league and cup double.

Against bottom-of-the-table Huesca, Messi scored after 13 minutes with a fine, left-footed curled effort from outside the penalty area before Griezmann added an almost identical goal 22 minutes later.

Huesca had lost 8-2 at the Nou Camp in 2018, but were given a fortunate way back into the game when Barca goalkeeper Marc-Andre ter Stegen was adjudged to have fouled Huesca's Mir.

The striker, on loan from Wolves, converted the penalty, but the hosts restored their two-goal lead when Mingueza headed his first goal for the club following Messi's cross from the left wing.

Mir had a chance to make it 3-2 but somehow chested the ball over the bar from only a few yards out. Messi grabbed his second goal of the night, and his 661st for Barcelona, with another curled, left-footed shot from distance in stoppage time.

The win takes Barcelona, who have already reached the Copa del Rey final, above Real Madrid and into second with 11 league games of the season remaining.