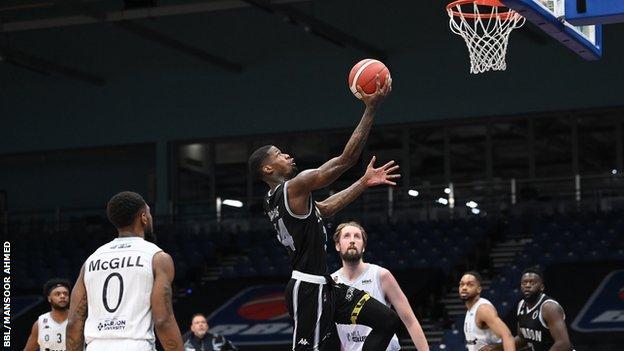 The Lions twice held comfortable leads but were pegged back by the Raiders, who belied their status as underdogs.

Earlier, the Lions' women won their final with a 96-64 win over Nottingham.

Lions made the better start, leading 28-17 at the end of the first quarter with Williams hitting early points, but two threes from McGill and another from Will Neighbour brought the Raiders back to within a point at the start of the second quarter.

The Lions' 18-5 response gave them a 14-point lead at half-time but Plymouth again came back in the third quarter, with McGill and Neighbour again featuring in a 15-2 start to the second half to again trail by a single point.

The game remained close in the fourth quarter with Liggins and Orlando Parker, two of their leading players, struggling with foul trouble.

Liggins fouled out with 30 seconds remaining, with the lead just four points but when Chris Porter-Bunton's three-point attempt for Plymouth missed with seven seconds remaining, London secured the rebound to win their first title of the season.

"I missed the cup final because of Covid and I didn't want to miss the opportunity again," said Liggins. "We came out fighting – but credit to Plymouth – they made this a game of runs."