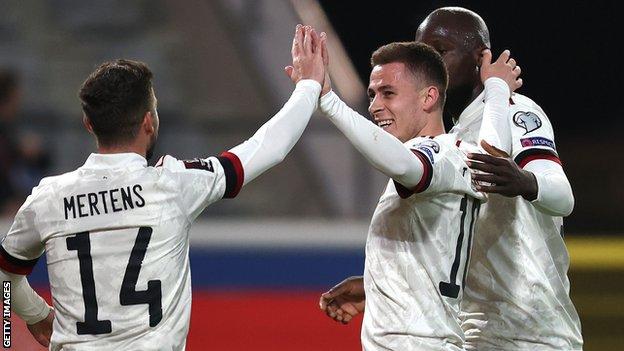 Wales threatened to cause another major upset against Belgium before succumbing to the stellar quality of the world's number one-ranked side in their opening World Cup qualifier.

Wales took an unexpected early lead with their first attack as Connor Roberts and Gareth Bale combined for Harry Wilson to finish a fabulous team move.

Belgium responded swiftly and decisively as Kevin De Bruyne lashed in an equaliser before Thorgan Hazard headed them in front.

That was the least the home side deserved for a dominant first half and, although Wales posed more of a threat in the second half, Romelu Lukaku's penalty settled the game.

Defeat was Wales' first in a competitive match since June 2019, ending a national record of 11 games unbeaten.

This was always likely to be a daunting start to Wales' bid to qualify for a first World Cup since 1958. On paper, there is no fixture in international football more difficult than an away game against the world's number one-ranked side.

Unbeaten in competitive home matches since 2010, Belgium would be among the favourites to win the 2022 World Cup, never mind qualify for it.

It therefore felt like something of an anomaly that they had failed to beat Wales in their four previous encounters, the most recent being Wales' iconic 3-1 quarter-final win at Euro 2016.

Since then, Belgium had scored 153 goals in 51 games under Roberto Martinez and not lost a single qualifier.

With De Bruyne in the form of his life at Manchester City and Lukaku prolific at Inter Milan, this prodigiously talented Belgian side seemed ready to rid themselves of their bizarre Welsh hex. 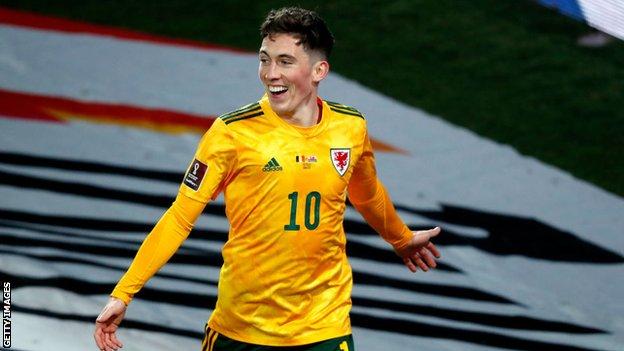 Wales were braced for an onslaught and they were set up to try and contain their free-scoring opponents as best they could.

It was an onerous task made more so when midfielder Joe Allen was forced off after just seven minutes – a particularly cruel blow as this was his first international appearance since 2019 because of a different, more serious injury.

Wales barely touched the ball during the early stages but, when they had their first meaningful spell of possession, they made it count.

Chris Mepham started the move with a long ball out of defence, which Wilson brought down and played to Bale, who released Roberts along the right wing with a delicate first-time pass with the outside of his left foot.

Roberts then returned the ball to Bale, whose right-footed through ball was weighted perfectly for Wilson, who did not need to break stride before stroking the ball into the bottom corner.

The goal was a work of art – and entirely against the run of play.

If Belgium were momentarily stunned, it did not take long for them to regain their poise.

First De Bruyne whipped in a devilish deep cross, which Romelu Lukaku put over the bar with a lunging effort. Then soon afterwards De Bruyne took matters into his own hands as he equalised with a powerful low strike from 25 yards.

Belgium's pressure was relentless and, six minutes later, they were in front. Thomas Meunier swung in an inviting cross from the right and a slip from Roberts inside the penalty area allowed the hosts' other wing-back, Hazard, to head in.

Playing almost exclusively in the Welsh half and with 80% possession, it was a small wonder Belgium only led by one goal at half-time.

But it was a more even contest in the second half, with Wales pushing forward with greater confidence and freedom.

Bale made a couple of dangerous runs into the box and mishit an ambitious overhead kick, before Daniel James cut inside and shot wide.

Despite their valiant effort to take the game to their opponents, Wales struggled to trouble them with genuine scoring opportunities.

Belgium dealt with Welsh attacks fairly comfortably and, after weathering a relative period of pressure, they put the result beyond doubt.

It was a messy goal for Wales to concede, with Mepham trying to clear a loose ball in the box but not noticing the onrushing Dries Mertens, who he inadvertently kicked to concede the penalty which Lukau converted with ease.

It was a stark illustration of the gulf between the sides and, even if Wales had enjoyed some unforgettable successes over Belgium in recent years, they were no match for them on this occasion.

But these are early days in the campaign for Wales, whose next qualifier is at home to the Czech Republic – who thrashed Estonia 6-2 in Wednesday's other Group E game – next Tuesday.