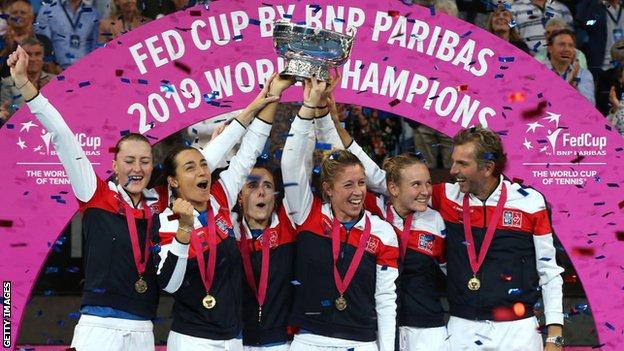 The Billie Jean King Cup Finals must find a new home after the International Tennis Federation terminated its contract with host city Budapest.

The inaugural 12-team competition, due to take place in April 2020, was cancelled because of coronavirus.

This year's event has been postponed until the end of the season, leaving the ITF a small window to secure a new host in very uncertain times.

Any new deal is likely to be significantly inferior financially.

The three-year agreement with Budapest provided $12m (£8.6m) per year for the players and a further $6m (£4.3m) for national federations.

The Hungarian Tennis Association (HTA) wrote to the ITF on 22 April to say this year's event could not be staged safely as a result of Covid-19.

The letter also strongly suggested the money promised could no longer be justified and that previous commitments would need to be carefully examined to ensure they represented good value for the taxpayer.

The ITF said: "After working together in good faith for the past year, we were surprised and disappointed to be informed that the HTA no longer considers it possible to hold the event in Budapest.

"Given the timing, the ITF has been left with no other option than to end the hosting agreement with Hungary and explore an alternative solution.

"The ITF will do everything in its power – for the sport, the players, nations, and the fans – to ensure this landmark competition in tennis and women's sports will be held as soon as it is reasonably practicable."

This year's event had been pencilled in for early November, at the completion of the WTA Tour season, with the 2022 Finals due to take place just five months later.

Time is of the essence as the ITF tries to safeguard the future of the 58-year-old competition, which until recently was known as the Fed Cup.

Live scores, results and order of playAlerts: Get tennis news sent to your phoneDreaming Whilst Black: Why Kwabena's dream job might mean risking it allCastro vs the World: Fidel Castro's Cuba as told by the spies, revolutionaries and diplomats who shaped it
Source