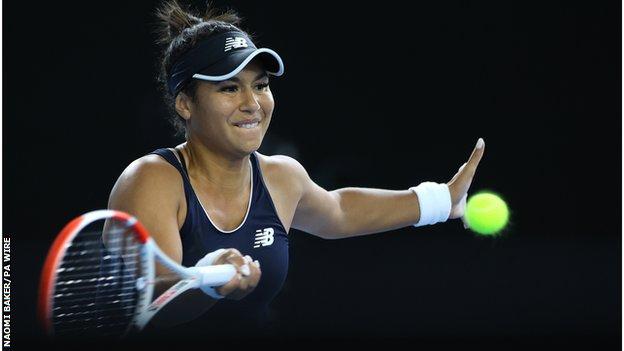 Heather Watson was unable to clinch victory for Great Britain at the first time of asking in their Billie Jean King Cup play-off tie against Mexico.

With Britain leading 2-0 overnight, Watson knew beating Marcela Zacarias would give the hosts an unassailable lead in the best-of-five tie.

If Boulter also loses, the tie will go to a deciding doubles match.

The second singles match will take place at 16:15 BST, with the day's play at the National Tennis Centre paused to mark the funeral of Prince Philip.

The Billie Jean King Cup is the new name for the Fed Cup, the women's international team event that Britain have finished runners-up in four times but have never won.

If Anne Keothavong's team manage to secure victory against Mexico they will progress to the 2022 qualifiers, where ano ther win will put them in next year's eight-team finals.

Watson out of sorts but GB still in control

With Johanna Konta missing through injury, Watson is leading the British hopes in a home tie which they were expected to win comfortably.

The experienced 28-year-old won her opening match against Olmos on Friday in straight sets, but found the going much harder against Zacarias, who is ranked 208th in the world.

Watson lost her opening two service games and, after recovering to level at 3-3, took just one of the next 13 points as a consistent Zacarias won Mexico's first set of the tie.

She improved her level at the start of the second set, with team-mates Boulter, Katie Swan and Jodie Burrage aiming to inspire her with plenty of vocal support from the sidelines.

Service games for the Briton rarely came under threat and, after breaking for a 3-2 lead, she had the chance to serve out the set to take the match into a decider.

However, Watson faltered to lose serve for 5-5 and her confidence appeared to sap as Zacarias seized control again to earn only her second career win over a player ranked inside the top 100.