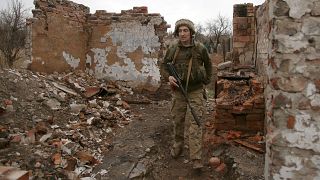 US Secretary of State Antony Blinken is expected in Brussels on Tuesday for talks with European and NATO allies amid a large build-up of military forces on the borders with Ukraine and in Crimea.

The State Department says Blinken will be joined in the Belgian capital by US defence secretary Lloyd Austin for additional consultations on Wednesday.

Tension has been building in eastern Ukraine in recent weeks, in an area where the army has been in conflict with Russian-backed separatists for seven years.

Large amounts of Russian military hardware has been deployed near the border, and there has even been a surge of fighting recently.

This follows a period of calm in place since a ceasefire came into effect in July 2020.

Afghanistan and the Iran nuclear deal will also be high on the agenda of Blinken’s visit.

The G7 group of countries has called on Russia to “cease provocations” on Monday.

The foreign ministers of the G7 – Canada, France, Germany, Italy, Japan, the UK, and the US, plus the High Representative of the European Union – said they were “deeply concerned” about the military build-up, and urged Russia to “cease its provocations and to immediately de-escalate tensions”.

Euronews journalists visited Mayorsk, recently, where Ukrainian soldiers reported an increase in fighting, and the deaths of four people from their army nearby in shelling a week ago.

Ukraine has accused Russia of massing more than 80,000 troops near its eastern border and in Crimea, which Moscow annexed in 2014.

Is eastern Ukraine slipping back into a full-blown war?

According to Kiev, the pro-Russian separatists also have 28,000 fighters and more than 2,000 Russian military advisers and instructors in the territory they have controlled since 2014 in the east of the country.

“These large-scale troop movements, without prior notification, represent threatening and destabilising activities,” said the G7 foreign ministers in a statement.

“We reaffirm our unwavering support for the independence, sovereignty and territorial integrity of Ukraine within its internationally recognised borders,” the statement added.

The US warned Moscow on Sunday against any aggression in Ukraine.

“There will be consequences,” said Blinken.