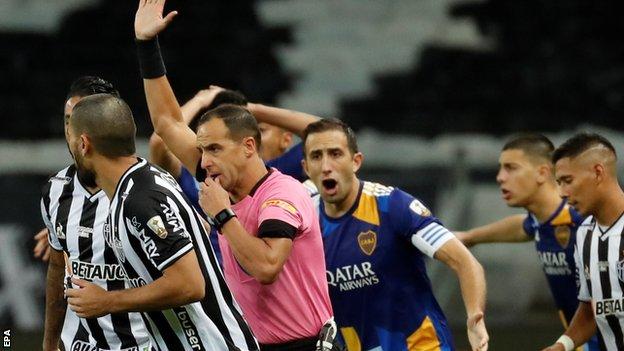 Six Boca Juniors players and officials were charged after they clashed with Brazilian police following their Copa Libertadores exit to Atletico Mineiro.

The Argentine side, who went out on penalties after two goalless games, were furious at a goal in each leg being ruled out by VAR.

There were clashes in the tunnel and dressing rooms after the second leg of the last-16 tie at Brazil's Atletico.

The day after the second leg on Tuesday, a police statement said two of the Boca camp were charged with damaging property and released after paying 3000 reais (£421) bail each.

Four others from the Argentine club were charged with causing bodily harm and abusing authorities and they were released after "formally agreeing to appear before a judge" at a future date.

In a statement, Atletico said their club president had paid the bail money because Boca did not have enough cash on them, although "the amount was soon reimbursed by the Argentine team".

The six charged and released were not named and, having left to return home, Argentine authorities ruled the Boca squad must quarantine for at least seven days on their return.