Southampton put their Premier League troubles to one side as they reached the FA Cup semi-finals by brushing past Championship hosts Bournemouth.

Nathan Redmond inspired the Saints, who have lost 10 of their past 12 league games, with two goals and an assist.

The visitors went ahead when Moussa Djenepo coolly slotted in Redmond's precise pass after a driving run.

Redmond's stunning solo goal gave the visitors a commanding half-time lead before he calmly steered in the third.

"We had aspirations of getting to Wembley at the start of the season. It's a chance for us to put the league form behind us," Redmond told BT Sport.

"It was something for us to always aim for. We knew we wanted a cup run this season."

Southampton will find out their semi-finals opponent when the draw is made at half-time in Sunday's tie between Leicester and Manchester United, live on BBC One around 17:45 GMT.

The semi-finals will take place on the weekend of 17-18 April, with the final at Wembley on 15 May.

Southampton manager Ralph Hasenhuttl has made no secret of the club's ambitions to go far in the FA Cup this season and, having seen off Shrewsbury, Arsenal and Wolves to reach the last eight, facing Championship opposition was a presentable opportunity to move into the semi-finals.

A wretched run of form, heavily contributed to by a string of injuries to key players, has sent the Saints plummeting down the Premier League and put them in danger of being dragged into a relegation battle.

The FA Cup, however, has provided a welcome distraction.

A professional performance, full of pace and purpose, illustrated the gulf in quality between Hasenhuttl's side and a Bournemouth team who have been inconsistent as they pursue an instant return to the top flight.

The Cherries have also been beset by several injuries in recent weeks and Jonathan Woodgate's side were well short of the required level needed to test their south-coast neighbours.

"It was a very lively performance from our side," said Hasenhuttl, who is aiming to become the second manager to lead the Saints to the FA Cup after Lawrie McMenemy in 1976.

After being given a reprieve when Cameron Carter-Vickers' early own goal was overturned by VAR, Bournemouth were unable to use that as a springboard and get a foothold in the game.

Once the Saints exploded into life towards the end of the first half – largely down to former England Under-21 international Redmond – there were few signs of a Cherries comeback.

While there will be understandable dismay at not being able to become the first Bournemouth side to reach the FA Cup semi-finals, Woodgate's side must now regroup to focus on their promotion campaign.

"The lads never gave up, but they are a good side. We move on now. We have got nine big games and we're looking to get into the play-offs," Woodgate said. 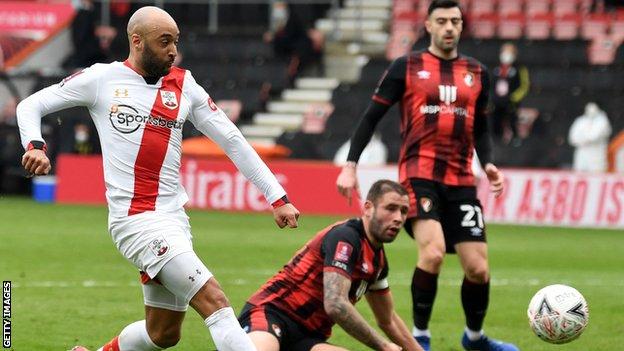 Stats of the day

Southampton have reached the FA Cup semi-finals for just the second time in the last 18 seasons, last doing so in 2017-18 before being eliminated by eventual winners ChelseaBournemouth have lost three of their last five home games in all competitions (winning two), as many defeats as they suffered in their previous 18 (winning 11, drawing four)Bournemouth have progressed from just four of their 30 FA Cup ties against top-flight opponentsSouthampton have scored two or more goals in each of their last three away games in all competitions (seven goals in total) after failing to find the back of the net in five of their previous seven on the road (four goals in total)Moussa Djenepo's opener for Southampton was his first in 20 games in all competitions since netting against West Brom in OctoberNathan Redmond's two goals against Bournemouth are as many as he managed in his previous 34 appearances for the Saints across all competitionsRedmond has been directly involved in three goals in a single game in all competitions for the first time since May 2015 for Norwich v Fulham in the Championship (one goal, two assists)

After the two-week international break, Southampton will refocus on the Premier League when they host Burnley – the side directly below them in 15th place – at 12:00 BST on Sunday, 4 April.

Bournemouth, who are two points outside the Championship play-offs in seventh, welcome eighth-placed Middlesbrough to Dean Court on Friday, 2 April (15:00).